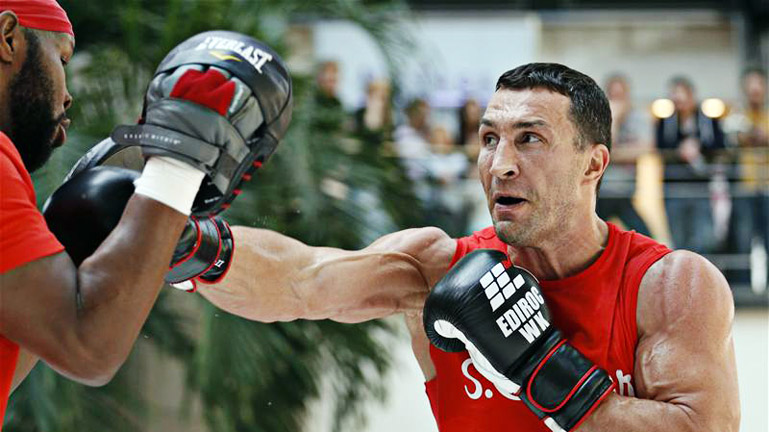 A glimpse into the meticulous Klitschko's regime

THE ramrod left jab, the shuddering left hook, the destructive straight right. Wladimir Klitschko’s frightening array of signature shots are constantly sharpened through his padwork [above], which he carries out in the morning. It is during the pads sessions that trainer Johnathon Banks and Klitschko explore various ways in which to execute specific punches and manoeuvres.

“We do a lot of mittwork and technique training,” Banks confirms. “We create different strategies and try out different movements. I teach him so many different things ahead of each fight in order to prepare him for as many potential occurrences as possible. Wladimir has an unlimited arsenal. I just show him different ways to unleash it.”

Klitschko affirms his fondness of the technical aspect of the sport. “Thinking how to hit and how not to get hit and how to knock your opponent out, that’s the whole art of boxing,” he maintains. “It’s not always about showing everything you can do, it’s about using your technique and power as needed. It’s about polishing all that you have learned before.When you focus on the boxing plan, it works out exactly as you plan it.”

‘Reality’ is a key term within Klitschko’s fight preparation. Banks believes that as often as possible, training exercises should imitate the three-minute round format, as this is what Wladimir will be faced with on fight night.

“From the start of the camp until the end of the camp, it’s good to keep everything at three-minute rounds,” Banks deems. “We always do three-minute rounds on the pads. Before we start the workout, I don’t know how many rounds we’re going to do. Sometimes we do four, sometimes six, sometimes eight, maybe even 10 or 12. We mix it up each day. It depends on the energy Wladimir has. I’ve been a part of his camps since 2004, so I know him very well. I’m able to recognise when he needs a rest or when he’s got more left in the tank.”

“Although Wladimir shadow-boxes every day, it isn’t one of the most important parts of his training,” Banks points out. “He shadowboxes in the morning before padwork and in the afternoon before sparring, but I think it’s overrated by some people. It’s just a warm-up exercise. We do two or three rounds at the most. Wladimir also does skipping occasionally.”

Banks encourages Klitschko to have ample periods of rest during camp. No formal training takes place on Wednesday, Saturday and Sunday.

“Rest allows the body to fully develop and the muscles to build,” Johnathon informs.

Although Wladimir has three days off training during the week, he usually goes for a 45-minute swim on two of these days. “Swimming is better for him than running,” Banks says. “It’s less harsh on his joints.”

Wladimir has seemingly struck the perfect balance between resting and training during camp. He may be nearing 40 years old, but “Dr Steelhammer” is not ready to surrender his heavyweight crown just yet.