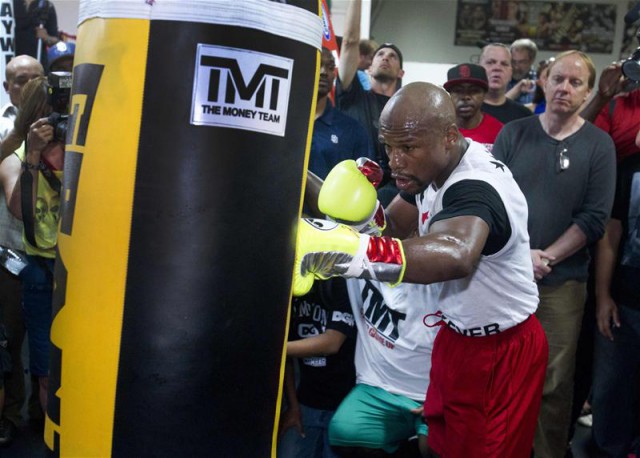 Ashley Theophane has trained with Floyd Mayweather since 2012

THE first time I went to train with Floyd Mayweather was in 2012. I was the British champ and I was training in New York. I came over to Floyd’s gym for a two-week change. On my first day, Floyd stopped me as I was walking by and asked who I was. I told him I was the British champion and what my record was and he said we might spar. Every day he was cool with me. Now I’ve been training at the gym for two years, I’ve seen loads of fighters come and go and Floyd didn’t notice them so me joining his team was meant to be.

I’VE been in the Wild Card when Manny Pacquiao and Amir Khan were there and I watched them spar. Floyd trains harder than any world champion I’ve ever been around. Some days you might come in and you think, ‘When is this man gonna stop?’ Strength and endurance is what he does, which is why any time of year he looks on weight or a few pounds over. He’s worth so much money but he trains like a poor man. It’s all about the money, boxing has brought Floyd a great lifestyle so it motivates him.

HE tries to be an all-round trainer, including yoga. Now he’s got [strength and conditioning coach] Alex Ariza here so he’s thinking that as he’s getting older, he always says, ‘It’s not about training harder, it’s training smarter.’ He listens to his body more, and if he doesn’t feel good he’ll walk out of the gym.

Perform for the crowd

FLOYD has his own training time, but you can train at the same time as him; there are so many people watching though, you can’t get your own workout done, so I’d rather just watch. Fans are allowed to watch for free if there is space in the gym which is cool and that motivates him, that so many people wanna watch him.

Be an individual
THERE are specific things Floyd does, like he doesn’t train or spar to the three-minute bell. We push ourselves more, beyond the three minutes’ work then one-minute rest we were taught as amateurs. That’s been the biggest difference to what I’d experienced before. Sparring depends on the mood he’s in, some days he’ll go hard but others he’ll just work on defence or specific things. In the camp for Saul Alvarez, it wasn’t physically demanding but mentally demanding, you had to think and be sharp, because he will notice your set routine; we all have a tell.