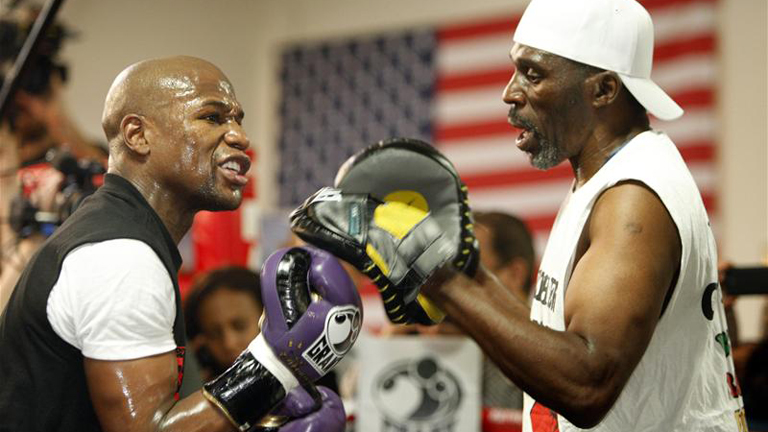 Anyone lucky enough to witness Mayweather’s many public workouts over the years has observed his uncle’s unique and innovative brand of padwork. Flashbulbs pop and fans call out requests while Roger’s pads harass his nephew like a swarm of fireflies, their movement almost invisible to the naked eye. Critics denigrate these displays as rehearsed routines offering little practical value, but Roger insists that when the gym doors are closed, their everyday padwork bears a striking resemblance to the flashy exhibitions so beloved by the masses.

“People think I’m trying to make him look good,” Roger complains. “I do the same thing when they’re not there. I used to hold mitts when I was a little bitty kid. Ain’t Floyd the best fighter in sports? That padwork must do something then.

“What padwork does is teach you offence and defence. If I throw a punch at you and you on my pad, I’ll tell you how to catch the punch. If I go to the body I’ll tell you how to block the punch. If I throw a jab I tell you how to catch the punch. Then you throw, I tell you how to counter-punch. Pads is a way to air your offence and defence in one sector. Most people can’t do it ‘coz most people can’t think as fast as me. You have to be able to push these guys on the pads, all these punches, non-stop; most people can’t do it because you have to be thinking to catch, roll, slip, pull off from punches. You’ve got to co-ordinate all that at one time and that’s what makes the fighter. It ain’t nothing to do with handspeed. Padwork is how you learn how to block, slip, catch and throw shots back. Padwork is the key to be able to adapt to what the fighter is going to do. You have to be aware of what the opponent is going to do and adapt to that in a split second; that’s what the trainer does it for. Pads ain’t just to hit on, it’s to correct things about you; how to keep your hands up, how to catch, how to roll, slip, duck, that’s what pads are for. The pads are to create the same sense of volume of punches the guy gonna’ throw at you.”

Getting the better of Mayweather in sparring is something a fighter can dine out on for many years but that ambition is something Roger encourages.

“For a guy to fight Floyd, a guy has to be an attacker, he’s gonna’ have to take risks and keep Floyd on the back step the whole time,” Roger explains. “That’s the kind of guy you want because you try to set Floyd up, outbox him in the ring, Floyd know how to box, so you have to attack him. If he attacks him, that keeps him alert all the time, keeps him thinking all the time. Doesn’t matter how hard they go, he gonna’ handle it anyway. I let Floyd spar guys between 154 and 160lbs. There ain’t no light sparring, most of them be getting their ass whupped because they can’t do nothing with him.

“I want guys trying, ain’t that what a fight is? Ain’t a guy trying to win the fight? That’s what I want for him in sparring. I want the guy to be at his absolute best, trying to get my nephew, beat my nephew. Because remember, if they do something to my nephew they gonna’ go talk about it to their friends anyway, but they ain’t had nothing to talk about.

“We don’t spar by rounds, we spar by time. He got about five sparring partners and he do four or five-minute rounds, four rounds with one guy, then three or four with another guy. Certain days he’ll box seven, eight or 10 rounds but the rounds are harder. The sparring partners, they are as good as the guy he’s fighting and we decide whether they gonna’ stay or go. If he don’t benefit Floyd his ass got to go. If they’re decent – if they stay in there and take it – we gonna’ keep ‘em.”

Between early-morning runs through the arduous Las Vegas mountains, two-hour technical gym sessions with his diligent father and uncle, and regular evening strength and conditioning workouts with Leonard Ellerbe, Floyd has evidently allied an indefatigable work ethic to the intricate craft honed during his childhood. It would be easy for Floyd to rely on his sublime skills and rest on his considerable laurels. Millions stockpiled in the bank and a legacy assured can induce indolence in even the most dedicated, but while Mayweather reassuringly admits the temptation is there, it is always suppressed.

“Getting out of my big, beautiful king-size bed is the worst part of my training,” he concedes. “It’s hard sometimes to put my feet on the floor knowing I have to get to the gym. But once I am up and out of bed, I switch into gear and am ready to go.

“I never stop working out. If I am not in the boxing gym, I go to the fitness gym where I either work out or play basketball.

“I never feel like I am out of shape and for that reason I feel confident that my physical fitness is always at a level that when I start to train for the fight I can get right back into fighting shape.”

Roger and Ellerbe are both effusive in their praise for Mayweather’s Herculean training efforts. They recognise – as does the fighter – that ability can only take a boxer so far; perspiration must sit companionably alongside inspiration.

“He just works non-stop, he never gets tired; his output is phenomenal,” eulogises Ellerbe. “He’s not just the most talented fighter but he works harder than any other guy. There are three things that have allowed him to be the
best in this sport – he’s the most talented, he works the hardest and he’s the smartest – that combination is unstoppable.

“My toughest challenge is trying to convince him to rest because he always wants to work. But that’s a great thing. I never have to push him… he’s always calling me, he’s very self-motivated. He’s the best conditioned athlete pound-for-pound in sports.”

Roger concurs: “I ain’t never had to push him. If I have to push you to be great, something’s wrong. If I’m pushing him to do something he don’t wanna’ do, he ain’t gonna’ be great at it anyway.

“It ain’t no different from Michael Jordan. Jordan shot basketballs at night, all night long, when the sun was gone. Now, you can shoot a basketball at night, you know you can shoot it in broad daylight, right? It’s all about having your skills and how you achieve them.”

This feature was originally published in the Total Fight Training supplement