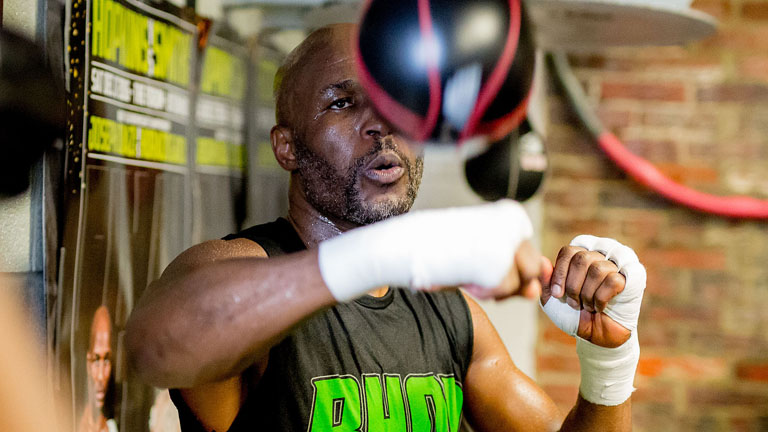 Every one of Bernard Hopkins’ team – including the man himself – cites the fighter’s nearmonastic lifestyle, both during and outside of camp, as a key factor in his longevity and enduring success. The exemplary athlete has not touched a drop of alcohol since his teenage years. After his release from prison in 1988 – Bernard served a near-five-year stretch for various offences – Hopkins sought to turn his entire life around and swore off drugs and junk food as well as booze. Even now, he rarely goes to bed beyond 9pm. His former trainer and fellow Muslim Naazim Richardson talks about his old charge’s habits with a mix of awe and respect.

Hopkins is in full agreement and advocates 24/7 year-round discipline as a necessity for any fighters with ambitions to win major honours and enjoy a lengthy ring career.

“Keep your body clean from any bad things that will not give you a chance to fulfil any dream you have,” he advises.

“You have more time in your personal life than in the gym. You’re in the gym for three hours. What do you do when you’re not in the gym? How do you live? How do you eat? How do you rest? When do you go to bed? Are you weighing your manhood out to the point where you got no strength? Having a career is management. It’s discipline. I conditioned myself early in my life to reap the benefits now. I think long-term.”

STRETCH – REGARDLESS OF YOUR AGE

Hopkins stretches his muscles – or assistant trainer Danny Davis manipulates them on his behalf – before every training session. This is not only to allow greater agility and flexibility in the ring, but helps to prevent injuries especially, as Hopkins happily points out, when one is advancing in years.

“The worst thing to do is when you got to go to fight and you’re injured. Why wouldn’t you want to go into the ring healthy? Stretching is important in any sport.”

Team Hopkins are as diligent in the recording of training output as Bernard is in the work itself. This attention to detail and the desire to retain the gathered information for future benefit emanates from the veteran boxer.

“I’m a guy that likes details,” Hopkins attests, sounding admirably obsessive. “The details are important because they give me a foundation. So when my guy writes down that I did 15 or 10 or eight rounds and we add it up and get closer to the fight, I have a blueprint and I know if I feel too good to pull me back, or if I feel too bad to ease off the rounds a little. Everything is documented.”

His “guy” in this context is Stephen Parker, an associate of Hopkins for over 18 years. He began documenting Bernard’s travails around five years later and has never stopped, continuing the ‘if it ain’t broke’ theme espoused by his boss.

“I started out doing fitness work with him, getting him in shape then I would write down things like how many miles he’d run, how many rounds he’d spar, how many rounds he’d shadow-box, jump rope and do exercises – I could determine when he was really in shape,” Parker says, excitement evident in his voice. “I even counted the amount of punches he’d throw each round. Recording everything, if he did a lot that week he could take off for a day and relax or do easy work in the gym.

For more on how to train like Bernard Hopkins and other big names from combat sport, download Total Fight Training from the Boxing News app, available from iTunes, Google Play or www.pocketmags.com.