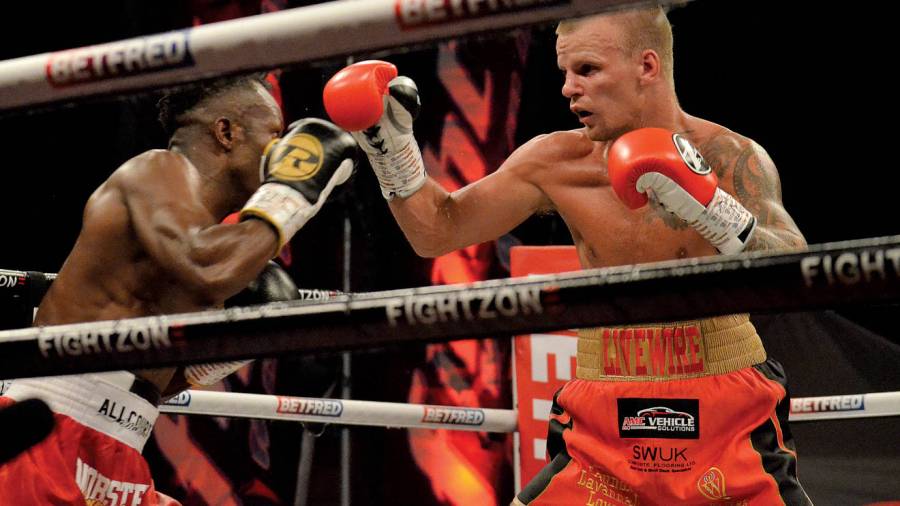 THERE’S a good night of British title action in Telford on Saturday night (June 11). BT Sport take their cameras to the International Centre for a show that features a pair of 50/50 fights that are anticipated by the trade and the locals.

Liam Davies will have hundreds of fans cheering him when he bids to become Telford’s first British champion. The 26-year-old bids to dethrone super-bantamweight champion Marc Leach (18-1-1).

Salford southpaw Leach was hugely impressive when winning the belt at the York Hall in February with a unanimous verdict over Streatham left-hander Chris Bourke. Bourke (10-0) did break his hand in an early round – the third or fourth – but the Peacock gym didn’t draw too much attention to that.

They didn’t want to take away from Leach’s performance and even with two hands, Bourke would have struggled. Bourke found Leach was quick to the punch, hard to hit and quick to counter. He left Bourke’s eyes bruised, his nose broken.

That points win made Leach the first British champion from Salford since Jamie Moore. Moore and Nigel Travis train Leach.

Davies is part of Errol Johnson’s BCB stable. He is the son of Tristan Davies, whose 14-1 pro career peaked with winning the Midlands Area lightweight title and was troubled by cuts.

The textbook Davies, who won European Schools bronze in 2009, had a hard 10-rounder last time out, eight months ago.

He shipped a few punches from spirited Nicaraguan Dixon Flores (17-7-3), a former contender at 115lbs, before taking over last October. That was the first time Davies has been past six rounds, Leach has been 12 in two of his last three, has also completed 10 rounds three times.

Davies was ruled out of a fight with Liverpool banger Andrew Cain in April by a shoulder injury and was then paired with Leach for the British title.

The fight was set for Derby on May 20 before the show at Pride Park football stadium was scrapped after Demetrius Andrade pulled out of the top-of-the-bill fight with local Zach Parker.

Davies believes he has too much “hunger and desire” for the champion and, at 5ft 9ins, he’s around three inches taller than Leach. Davies, also heavier handed and a good finisher when he has his opponent hurt, may feel he can break down the champion, but as Qais Ashfaq (8-0) and Bourke have discovered, Leach is hard to pin down. He has good anticipation, reflexes and movement and his punches come from everywhere.

Davies is rather easier to locate – he stands upright, relies on his feet for his defence – and we can see Leach being too quick and slippery and keeping his belt with a points win.

One of the best domestic dust-ups seen in a British ring in 2021 was the rematch between Birmingham’s all-action Ijaz Ahmed (10-2-1) and Quaise Khademi (8-1-1) last August.

That ended in a split draw for the vacant British super-flyweight title and they meet for a third time on Saturday night.

Ahmed won a 10-round majority decision in their first fight last February. The third fight was pencilled in for last December, but Khademi was ruled out with a cruciate ligament injury.

Ahmed has kept busy with routine wins over Alejandro Torres (2-6) – his first stoppage – and Luke Merrifield (0-7). Khademi, who missed out on boxing in April through illness, has made a change since they last fought, leaving coach John Tandy for Richard Sawyer.

The East Ham-based Afghani says that with Sawyer in his corner he will stick to his hit-and-move game plan and box with less emotion. Khademi says that against Ahmed last time: “There was a lot of emotion. He gave me my first loss. I wanted to hurt him.”

As is to be expected, both thought they did enough to win last August. Ahmed feels Khademi stole a few rounds off him. He told Boxing News: “If you watch it you will see I won rounds convincingly and when he won rounds he didn’t work as hard as me.

“I would work my socks off throughout the round and then he would get a burst of energy, throw a flashy combination and win the round.”

Ahmed says he plans 12 rounds similar to the fifth of that rematch when he was able to close the gap, make Khademi trade and had him looking disorganised briefly. Khademi looks back on the seventh as his blueprint, a round when he drew matador-style cheers from his supporters. Many of the other rounds could have gone either way.

Ahmed did his best work up close, Khademi did better when there was more space between them and both had their moments in every round.

Khademi did have his successes on the inside – that’s why he chose to stay there – but knows that when they box rather than brawl, it’s much harder for Ahmed. His rival had good spells when he switched southpaw and perhaps he will box more as a left hander this weekend.

Our guess is there will be more fighting than boxing – and that Ahmed will win narrowly on points after another fight-of-the-year contender.