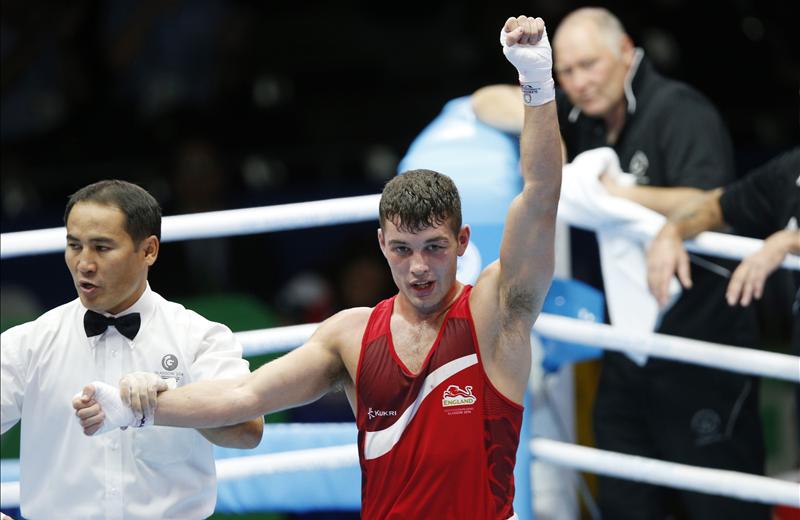 ON the first day the weigh-in is longer than usual. You get two hours because they’ve got to get loads of people through. It’s seven until nine am. After that, this week at the Commonwealth Games, it’s been eight until nine am. It’s been quite late. It’s normally earlier than that at some of the majors.

The routine starts weeks before, bringing the weight down nicely, monitoring the guys closely in the days before they compete. We educate the boys all the time about having lots of fibre in their diet, focusing on low-GI carbohydrate, slow-release carbs like healthy, clean foods that are quite filling and wholesome. We don’t worry about the weight of the food, we’re more worried about the composition of it. Then it’s a contradiction because all of a sudden when it comes to the time of the competition the nutritionist is saying you don’t have to focus on what’s in the food, you now focus on what food weighs.

We’re not having real changes in body-fat in 24 hours, it’s more about how much water’s going in and out, what the weight of the food is, how long it spends in your gut.

We start the process a few days before, monitoring the weight closely. That helps us out nicely because the night before the weigh-in we know what weight everyone’s going to bed at, weknow exactly what everyone’s losing over night. Just by monitoring that and collecting that data we can comfortably say to one, ‘You can be half a kilo over or .6 over, .7 over, .8 over,’ the big guys even a kilo over because we know they’re going to shift that in a seven-hour sleep.

On the morning of the competition, I’ll go and check the scales – that they’re perfect with my scales so that we know what we’ve weighed in on is the same as the official weigh-in and our guys can have a bit of a lie-in. It happened in Delhi where the official scales didn’t work. Most of the guys wake up a bit under anyway, so they can have a mouthful of water before they get to the weigh-in.

As soon as we’ve weighed in, the guys will take on some rehydration, most of the weight that they’ve lost overnight is just dehyrdration. We know how much they lost overnight, we know how much they lost the day before. Most of them will have 500ml of a rehydration electrolyte solution,some carbs, some electrolytes, so half a kilo straight away. They’ll have another half a kilo for breakfast. Breakfast will be mainly carbohydratefocused, with a little bit of protein as well. It all depends what time they’re competing. If they’re out early afternoon some of the guys will want a big breakfast because they’ll know they’re not going to have enough time to eat again before they fight. It might be a big breakfast at eight or nine o’clock and then a tiny little snack at 11am because they’re going to box at 12 or 1pm. If they’re on late afternoon, they’ll have a normal breakfast, a normal lunch and a light evening meal for these late fights.

We always like to eat together. It’s an individual sport but we’ve got quite a good team ethic. The coaches are great and they build a real nice team culture so everyone will sit down together at breakfast.

It’s a minefield in there. The dining room in the Athletes’ Village is the size of a football pitch, it’s huge. There’s everything you could imagine, good, bad and worse. So the first few days are a bit of a task to chaperone the guys around the dining room. But they’re all mature lads. There are coffee shops all over the place with cakes, it must be all for the endurance athletes living on carbs every day. With our boys it’s carbs specifically for the bouts and that’s about it really.

As soon as they’ve finished in the ring the first thing they do is get checked by the medical guys. Before they start to warm down or have a massage, they get on the scales and then we make a decision about what we’re going to put back in. In reality it’s purely about muscle recovery. It’s about replacing some of the fluids lost and having a bit of protein to recover the muscles.

We use other things like cherry juice, which really helps with their sleep and gets rid of muscle soreness. There’s loads you can do. We’ve got some night-time recovery drinks, slow-release proteins that you can take before bed and that’ll release over six hours. They can use those before bed. We use a lot of fish oils. How much fluid we can put in is all dependent on weight, if their weight’s good they take as much as they need.

It’s rare in the GB squad that anyone skips after a bout to manage to make weight. Skipping after a bout is not about weight management, it’s about flushing all those waste products out from the bout, clearing lactic acid, keeping the blood flowing. It’s a cool-down process. That combined with things like icebaths, compression garments, a good night’s sleep is all for the fighters’ recovery.

Scott Fitzgerald had started boxing at 81kgs. He eventually made it down to welterweight and won the gold medal at the Commonwealth Games, his first major international tournament.

“It took a while for me to get down, taking this weight off after being 83kgs at my all-time highest. I’m feeling really good with the help here,” Scott said. “It’s been simple making the weight here. I have three meals a day, all with carbs in. I’ve done it really well for the first time in my life.”.

Mark Ellison said, “It’s been great for Scott Fitzgerald because he’s struggled with the weight in the past. He’s been 69kgs as long as we’ve known him but he never had the education and the strategies around how to manage it properly. He’s been brilliant he’s followed it to the letter and he’s felt the benefits. He’s been fresh every day. He’s had three square meals every day and had loads of energy.”