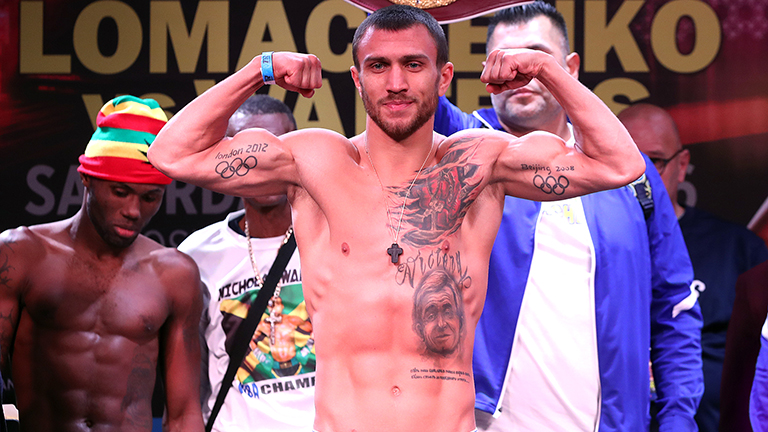 After Vasyl Lomachenko captured the WBA lightweight title, his promoter Bob Arum said the Ukrainian will return to action in August and will stay at 135lbs. Garcia is the current WBC lightweight champion and regarded as a pound-for-pound contender. Undefeated in 38 contests and a four-weight world champion, Garcia could be Lomachenko’s toughest test. Garcia’s size and power would make for a thrilling encounter with the speed and movement of Lomachenko. The undefeated American has stated his interest in the match-up before and “High-Tech” returned fire accepting a potential challenge. Possible barriers could prevent this showdown as Garcia has a long standing rivalry with Top Rank which saw him take a two-year lay-off from the ring in protest while first he has to get past IBF champion Robert Easter Jr in a unification bout set for July 28.

Beltran holds the WBO version of the lightweight title having beaten Paulus Moses over 12 rounds in February. The contest would act as Lomachenko’s first unification bout and with Beltran having a record of 35-7-1 at the age of 37, “High-Tech” will more than fancy his chances. Lomachenko previously held the WBO world title at featherweight and junior-lightweight so the Ukrainian will be keen to add to his tally.

Despite Manny Pacquiao already having a WBA ‘regular’ welterweight world title match-up with Lucas Matthysse on July 15, a rumoured showdown between these two stars has been brewing for some time. A large part of the talks have stemmed from Bob Arum who is keen to make the fight happen. Arum has previously stated a winter fight between the two is a possibility, but with Pacquiao campaigning at 147lbs and Lomachenko just moving up to lightweight the bout looks likely to take place at 140lbs. Pacquiao has been Arum’s most prized possession for the last decade. However Lomachenko is a rising star, this fight would likely be the passing of a torch.

Current WBA super-featherweight Gervonta “Tank” Davis is 20-0 at age just 23. Promoted by former five-weight world champion Floyd Mayweather, Davis looks set to become one of boxing’s rising stars. A showdown between Lomachenko and Davis has been talked about but with the two at different stages of their career talks have never really escalated. Mayweather has previously stated he wants “Tank” to fight the Ukrainian. Despite all signs hinting at the undefeated Lomachenko continuing to campaign at lightweight or above, Arum cited after his win against Linares the size advantage in favour of Venezuelan was a problem, meaning a drop back down in weight can’t be ruled out just yet.

Despite a seemingly slow start Linares dropped Lomachenko for the first time in his career at the end of round six. The Venezuelan rallied until he was stopped via a body shot in the 10th round to end the contest. However the scorecards were split with one judge having Lomachenko ahead, one in favour of Linares and the other a draw. The fight was entertaining for fans and acted as Lomachenko’s toughest test to date. After the bout in a post-fight interview Lomachenko stated he would welcome a rematch with Linares with the Ukrainian possibly wanting to win a return leg more convincingly. Linares claimed he believed the bout was stopped prematurely and would likely take confidence from the closely contested fight.