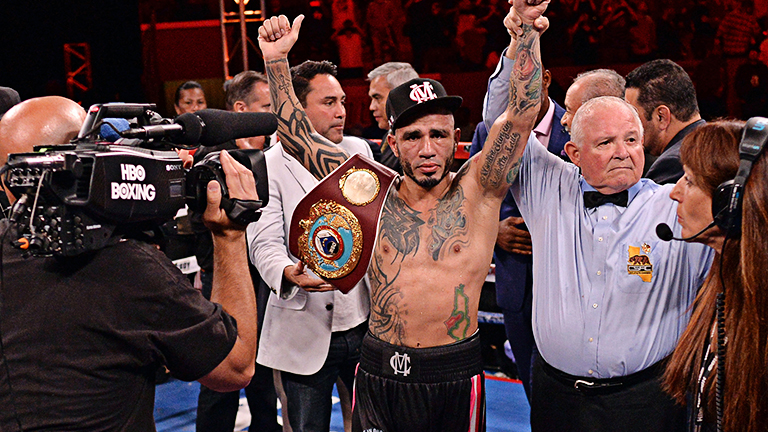 Who should Miguel Cotto face in his final fight in December?

FOLLOWING Miguel Cotto’s unanimous points victory over Yoshihiro Kamegai for the vacant WBO super-welterweight title, the Puerto Rican legend has confirmed that he will have one more fight in December before calling time on his long and illustrious career. Here, we list five potential opponents for the four-weight world champion.

After the win against Kamegai, Cotto’s esteemed trainer, Freddie Roach, boldly declared: “We want the winner of Canelo-‘GGG’.” It would certainly be by far the most high-profile clash on offer to Cotto. However, with Golovkin and Alvarez fighting for world middleweight honours next month, and Cotto having been reluctant to compete at 160lbs in the past, weight could be an issue. The Puerto Rican’s old foe Canelo would seemingly be more willing to accept a catchweight contest than Golovkin.

There have been strong rumours that this could be the most likely farewell fight for Cotto. Lemieux is handled by Golden Boy Promotions, like Cotto, but once again, weight could be a problem with this one. Lemieux – a powerful, heavy-hitting middleweight – would surely have to meet Cotto at a catchweight below 160lbs, otherwise it is unlikely Cotto would entertain this matchup.

Khan ticks a lot of boxes in that he is a famous figure, exciting in the ring and of a similar physical stature to Cotto. This clash would appeal to fight fans all over the world, and would certainly provide Cotto with a fitting stage on wish to end his incredible boxing journey.

With Smith and Williams engaging in a rematch in late October – in an eliminator for Cotto’s newly won WBO super-welter strap – it would require a quick turnaround for the winner to then face Cotto in December. However, for the money that would be on offer, it is more than likely that either of the Brits would be delighted to accept the invitation.

The supremely skilled Cuban is the top dog at 154lbs, so a meeting with Cotto makes sense. However, as Lara has found out to his detriment in the past, many of the sport’s big names have often considered him to be more trouble than he is worth in terms of risk and reward, as he is an extremely tricky competitor, but not a mainstream attraction.