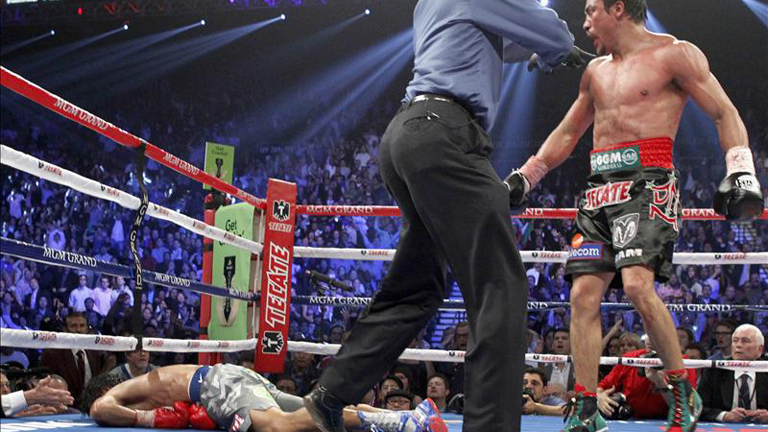 Another technical knockout, but Groves was in no state to continue after Froch ended their bitter rivalry infront of 80,000 at Wembley Stadium.

An ancient Foreman became the oldest heavyweight champion in history by coming from behind against Moorer with a pile driver right hand.

McCallum tagged Curry with a fight-ending left hook as Curry wheeled away, stretching him out on the canvas.

A left hook out of nowhere shattered Jones’ aura of invincibility. Though Jones found his feet and the fight was waved, he soon fell back over.

Having taken a beating for three rounds, Jackson drew Graham onto his wrecking ball right hand.

The Mexican hero ended his long-term rivalry with Pacquiao in dramatic fashion, flattening Manny with a destructive counter-right hand.

Martinez avenged his decision loss to Williams by sending him face-first into the canvas with a huge left hand.

Though Hatton claims his preparation was poor, the perfectly-timed left hand which left him horizontal was phenomenal.

Behind on the cards, Marciano rendered Walcott unconscious with a monstrous right hand, the ropes propping Walcott’s body up on his knees.

Robinson unleashed the ‘Perfect Punch’ – a lethal left hook – to remove Fullmer from his senses and gain revenge for the loss Gene handed him a few months before.