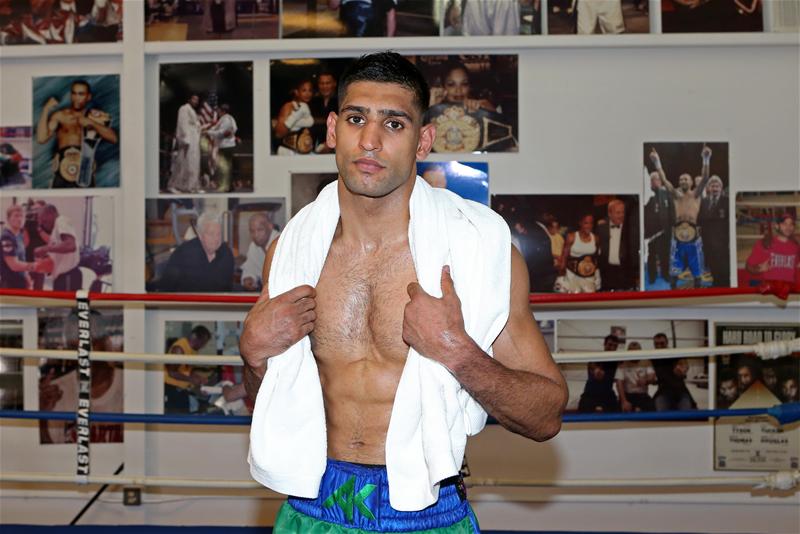 Tony Brady is not one for the limelight, but he's helping get the best out of Khan

“I’M a skinny guy who tries to keep his size up, that’s where my head’s at when I train.”

Tony Brady is the hired muscle in Team Khan, the main man’s strength and conditioning coach who has overseen a successful start to Amir Khan’s welterweight campaign.

Brady hasn’t boxed, but he’s been involved in the sport at a high level since he entered as one of the early strength and conditioners that were hired before it became a uniformed appointment for the top fighters.

Boxing was slow to listen when sports scientists came calling, but Brady says he knocked at the right time.

“I think that’s why I was able to sneak in when I did back in 2002 and a lot of guys were coming from more old school trainers and the functional stuff was just getting into play” he said.,”We were using more stable work, applying more physical therapy stuff to it, applying movements and starting to diversify. I just feel like it was a changing of the guard for how people train and I came along at the right time.

“I started in boxing with a few guys but the main guy I worked with a few years ago was Diego Corrales. And in my first fight with him he was making 130. He was 5’11”. If you’re going to be a bigger guy fighting in a smaller weight class it’s all about discipline because you have to give your body just what it needs and nothing excessive in order to stay within the confines of that weight class.

“He [Corrales] worked with [Alex] Ariza for the Floyd Mayweather fight and then I worked with him. I worked with Joel Casamayor for their first fight, then there were some issues with the camp – I was with Joe Goossen at the time – and we switched to Diego’s camp for the rematch. I was with Diego for the second Casamayor fight, for the [Acelino] Freitas fight, and I was in the corner for the [Jose Luis] Castillo fight, the rematch – which didn’t go our way.”

Ariza, a controversial character in the sport, also used to work with Khan.

“I don’t know everything that he does,” said Brady. “I don’t judge a guy on one exercise or little bits and pieces of their nutritional theories, I judge it by the whole programme. Guys sometimes look at what I do and try to paint a picture but you really can’t unless you see the whole programme, how you put it all together, what specific exercises you do, why, the time, how you work around the boxing schedule… This is a unique job. You have to put the right programme together. I don’t know his full programme but his record speaks for itself. He has a good resume. Whether or not I would do the exact same things, probably not but maybe. But his resume is strong.”

So too is Brady’s. His star students now include Khan and top super-middleweight Andre Ward and ahead of Khan’s fight with Devon Alexander, Brady praised his man’s work.

“Amir excels at everything, he’s an athlete,” he said. “That’s what I like about him. His speed, the movement, his handspeed, the way he can bounce around the ring, you can see he’s fast, but he’s strong also. He can squat 250lbs and can control it. I also work with Andre Ward and he’s the same, Amir can compete with him and those guys – I think – are the cream of the crop in boxing and they challenge each other.”

What does Khan find more difficult?

“It’s the same thing all fighters struggle with,” Brady replies. “Any sport like this is repetitive stress so it’s postural issues because you’re overtraining in one direction for a sport like this, so anything you can do to straighten your back, pull yourself back… Being in the stance all the time can cause imbalance so it’s keeping him balanced all the time. But he excels. He’s an athlete. You get in there and work with a guy like him you realise why, this is an elite level athlete. It shows.He works very hard. I don’t push guys until they throw up. If a guy’s throwing up it might mean that maybe they need to be in better shape before they come and see me. Amir, you can push him to the limit and you have to hold him back or he will keep going.”

Brady said Khan has mixed strength and conditioning with an improved knowledge of nutrition that has enabled him to move up in weight with impressive results against Luis Collazo.

“It’s a combination of strength and conditioning and nutrition,” he went on. “I was surprised he’s been at the high level for so many years now but he still had so much to learn. He’s learned a lot nutrition-wise, how to make that an asset, using that to make things go better for you and to stay in better health, keep your energy levels where they need to be, especially when you’re cutting weight off to feel your best and so your body can work to its potential. He’s a student. I try to teach, my style of training, I try to get my guys to understand why he’s doing something just in case so if I’m not there, he knows what to do and if he ever stopped working with me he’d take that stuff with him and be that much more knowledgeable for the next guy who comes in.”

Khan has, in the past, talked of fighting up a light-middleweight – but Brady reckons that would not be worth doing.

“He could but I don’t think it’s necessary because his body’s very comfortable right now,” he said. “He could, I don’t see the need. Some of those guys at ’54 are really big. He spars with some guys up to 160, but I’ve been around guys like [Erislandy] Lara, Demetrius Andrade, [Alfredo] Angulo and guys like that. He could move up, he could deal with those guys but I think ’47 is the perfect weight for him.”

Download the latest Boxing News, including an exclusive interview with Khan and preview of Khan-Alexander.