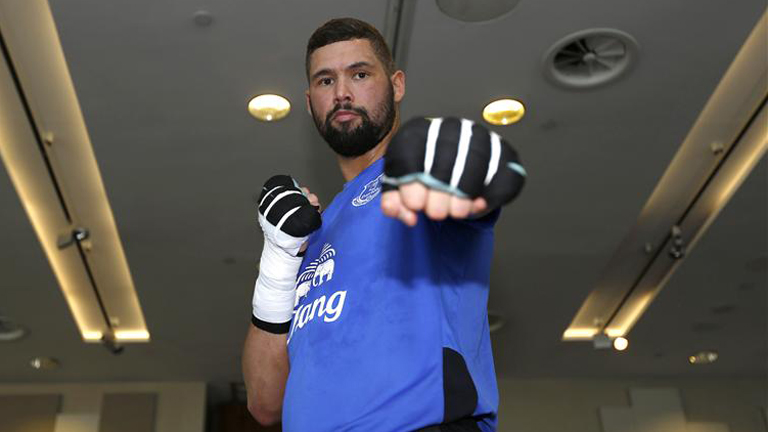 If it wasn't for MIchael Griffin the David Haye fight might not be happening, Tony Bellew insists

TONY BELLEW has been stopped once in his career, back in 2013, when WBC light-heavyweight champion Adonis Stevenson turned back the Scouser’s challenge in six rounds. Several of Haye’s supporters, and Haye himself, point to this contest as evidence that Bellew will not be able to withstand a heavyweight’s punches. But Bellew insists he had boiled down to make the 175lb limit to such an extent he was in exceptionally dangerous territory, and recently thanked the referee, Michael Griffin, who stopped the bout with Stevenson, for saving his life.

Bellew was reunited with Griffin in December, at the WBC Convention in Miami, and just a few weeks after the March 4 showdown with David Haye was confirmed at a bad tempered press conference.

Bellew – now WBC champion at cruiserweight – has nothing but respect for Griffin, and the official gave the Englishman plenty of encouragement.

“Michael Griffin came up to me and said ‘I’m so happy you’ve become world champion. Every time you hit Adonis, the noise he was making, you was hurting him’,” Bellew explained. “I thanked him for that, and said the better man won, and he said, ‘No, you don’t realise. You were the closest man to ever beat him that I’ve seen, you were hurting him, and I’ve refereed a lot of his fights.’

“I said ‘Thank you, but I want to say something to you. You saved my life that night.’ He said ‘What do you mean?’ I said, ‘You saved my life, thank you.’ He said, ‘You were doing fine by yourself.’ I said, ‘No, I weren’t.’ He [Stevenson] hit me with a shot and I didn’t see it, and I was asleep on my feet, and if he’d have been allowed to take the next punch when I’m not braced… As boxers we brace ourselves, we see punches coming, we turn ourselves away from the punch and we know what’s coming. But if the lights switch out, if a man is hit when he can’t brace or prepare himself, that is when the damage is done. I went like jelly in that ring, and he was probably one punch away from ending my career. That referee saved my life, and I said that to him. That was what I was like in that weight class.”

Bellew’s subsequent form at cruiserweight, where he is unbeaten in eight fights against largely world class opposition, has proved the choice to move up in weight was the right one.