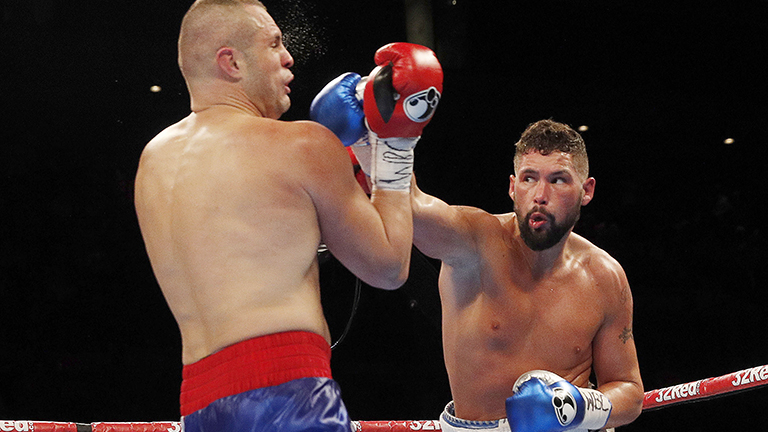 In his own words Tony Bellew takes aim at David Haye

I just dealt with him, no one’s ever dealt with him like that before. Don’t get me wrong, it wasn’t my best performance, I took too many risks and I won’t fight like that again, I can guarantee you that, but I got rid of him in a really exciting manner and in a way nobody had predicted I could do.

I took some clean shots and at this weight we are small heavyweights and you can’t afford to take the shots I took. People talk an awful lot about my chin and that I go down, but people have to remember that I get up. BJ caught me clean, I just didn’t feel like he had the power to hurt me, but he was strong, don’t get me wrong. The power that Ilunga Makabu had was something else and I felt like he could hurt me every time he hit me but with Flores and the other cruiserweights I’ve just not felt that.

I was setting him up for the counters, I wanted to give him a bit of confidence because the last thing for a fighter like me is that I nail him hard quite early and he goes into a shell. So I sometimes have to give them something so they throw and he did that. I’m happy, he’s been in with some really good fighters. David Haye had never even buzzed him in sparring, he’s dealt with heavyweights, he’s been in Shannon Briggs camps, Wladimir Klitschko camps, he’s been all over the place and nobody’s been able to do that to him. For me to just blast him in three rounds, I’m really happy with it. It’s unheard of someone doing that to him.

The stuff after the fight [confronting David Haye ringside], that’s business kicking in. There’s the boxing side, but with the business side I also get carried away myself sometimes. I’m a little embarrassed and I shouldn’t have really acted the way I did, but I’m an emotionally charged person and when the emotions are involved I just get hyped. I don’t think it’s the ideal way for a WBC champion to act, but it is what it is. I can only apologise to anyone it offends. People know me, they know I’m a level-headed guy and I’m down to earth but when there’s emotions involved, crazy stuff happens. It’s not a disaster, it just doesn’t look good. It’s not WWE, it’s professional boxing. It has created a huge amount of interest in the fight though.

It’s not a real dislike for David, it’s nowhere near on the level it was with the fella from Wales [Nathan Cleverly]. It’s just that Haye’s regarded as probably the best cruiserweight this country’s ever produced and I’d like to challenge him for that. That’s what it’s about to be honest. It’s definitely not a personal thing. There are various ways I think he can be beaten. He’s human, I know there’s this weird aura of invincibility about him but he’s the same as all of us. He’s very vulnerable himself to a shot and I’ll be totally honest, I wouldn’t take nowhere near as many risks as I did against BJ Flores. I’d be a lot cuter, a lot cleverer and I’d use my brain early doors. He’s a brilliant fighter, he’s great at what he does but ultimately he has flaws and he hasn’t been in a competitive fight for a long, long time.

This column was originally published in Boxing News magazine