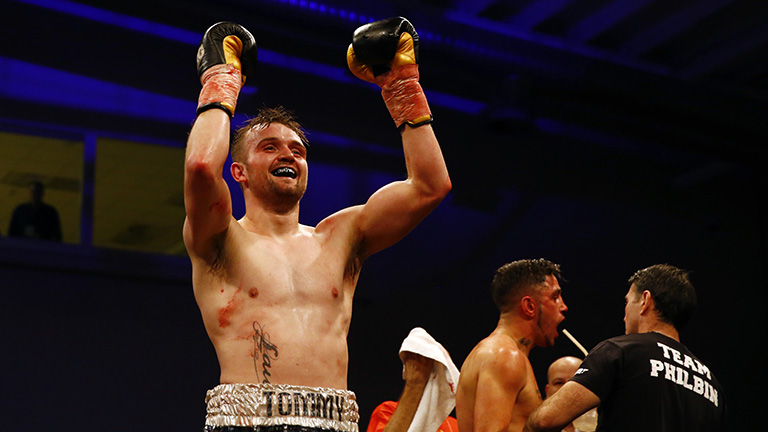 AFTER coming through a brutal ten round war against fellow Scot Rhys Pagan, Tommy Philbin has got his sights set on a British title.

In his first bout at super-middleweight, Philbin overcame an immensely determined Pagan, who’s grit pushed the Kirkliston man the full distance. Philbin out-boxed his opponent though and showed technical flare, in a standout Celtic title clash, to take a unanimous decision.

Tommy told me more about that battling performance, and about Rhys Pagan. “I’d seen him fight one of my old gym mates before, so I knew it would be hard but I didn’t think it would be as hard as it was to be honest! It was a really really good fight”.

With a new coach and a new weight class it’s been all change for Philbin, but he seems happy with his new regime and hungry for progress in the ring. “I moved to Billy Nelson’s gym in April… he’s a cracking coach, very knowledgeable with a great boxing brain. I felt great. I made the weight easily actually.”

To get his hands on the Celtic title was “massive” he says, adding “I’ve got two young kids – my daughter’s three and my son’s five. I was winning that belt for them and to be on the TV so I could show them… it was good.”

Having shifted from light-heavyweight to super-middleweight Philbin is stepping into a thriving division and, as the division’s new Celtic champion, he has his sights set on going one better and becoming British champion.

Having started boxing at nine and competed around the world as an amateur, fighting the likes of Callum Smith and Frank Buglioni in the amateur ranks, Philbin certainly has boxing pedigree. He also names rising star Josh Taylor as a former club-mate and notable fighters like Stephen Tiffney and David Brophy as stable-mates.

Tommy’s been happy to get valuable rounds with Brophy and thinks that his former opponent, George Groves, will win out in the fight that’s got all super-middleweights, and boxing fans at large, talking.

“I actually think Groves [will win]. I think it will be hard for Groves at the start because of Eubank’s speed but I think Groves will be too big and too strong and maybe stop him late, or take it on points.”

Tommy Philbin is appearing next on MTK Scotland’s December 16 Christmas Cracker promotion and says his training is progressing well, “me and Billy are working on a few things,” he says enigmatically.

Tommy’s opponent is yet to be named but he was keen to point to Tiffney’s appearance on the card too, as he takes on unbeaten super-featherweight, Lewis Paulin. “I see Tiff completely outclassing him and stopping him. Lewis is a good fighter but I think Tiff is on another level.”

He argues that Tiffney will be “at least a British Champion,” and adds, “I’ve grown up with Tiff as well and I’m not just saying this because he’s one of my mates, but he is so good. What was he, 7 and 0 and he fought Troy James? He’s a very good operator.”