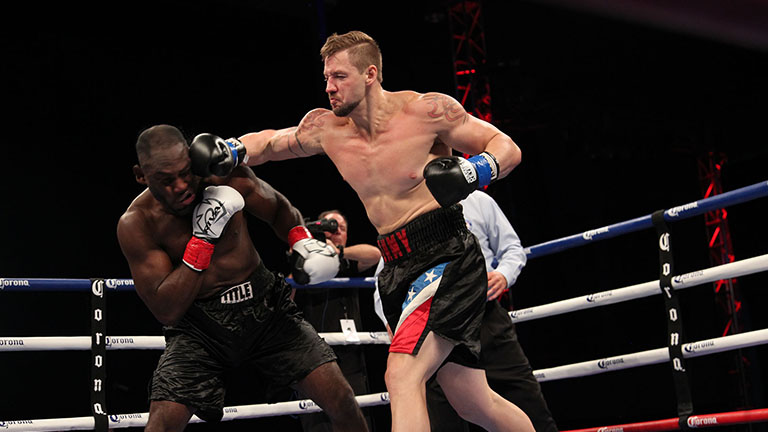 FORMER WBO World heavyweight champion, Tommy Morrison, kicked off his career in the late 1980s with eleven straight knockout victories. On Friday night, in Miami, Oklahoma, his son Trey Lippe Morrison went one better than his late father, stopping Ed Latimore in the first round and improving his record to 12-0. All of his wins have come by way of knockout inside of four rounds.

Part way through the first, Lippe Morrison landed a thudding right hand in the center of the ring that dropped Latimore. The Oklahoma native followed up with a powerful combination that sent his stunned opponent to the canvas once more. Latimore beat the count a second time but the referee stopped the fight with 41 seconds left in the first round.

“I didn’t expect it to end this quick,” said Lippe Morrison after the fight. “I knew it might, but I didn’t plan on it. It felt good to drop a guy with my left hand. I never had the accuracy or quickness with the left that I do know. I now feel that I am equally adept with both hands. My left is like my right.”

Unlike his father, who started boxing at the age of ten, Lippe Morrison didn’t put on a pair of gloves until he was 24 years old. He is fresh – very fresh. But his background as an elite-level athlete – Lippe Morrison played college football at the University of Central Arkansas- is proving to be an asset as he attempts to ascend the heavyweight ranks. Working with hall of fame trainer, Freddie Roach, certainly doesn’t hurt either.

“I feel I may have opened some eyes,” continued Lippe Morrison. “But that’s in large part to Freddie Roach. I feel I’m improving thanks to Freddie. I’m throwing quicker, snappier punches and the coordination between my footwork with my hands is way better. All that is because of Freddie.

“I wasn’t going for the KO but I’m glad it happened. I could not have done it without Freddie, that’s for sure. I’ll be going back to California in a week and then right to the gym.”