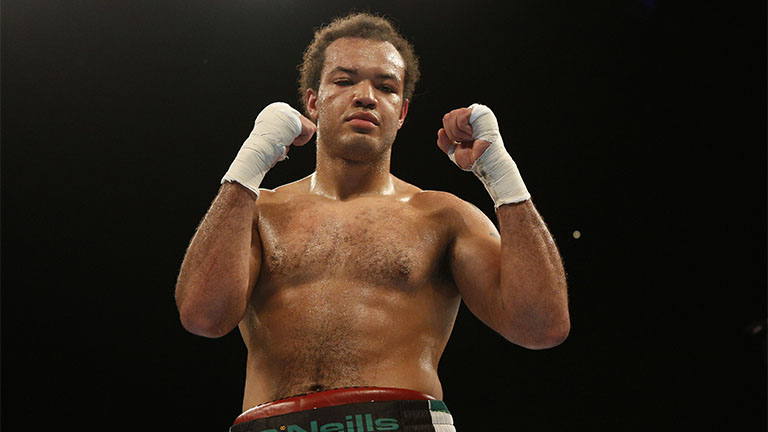 BELFAST cruiserweight Tommy McCarthy won a split but fully deserved decision over former Italian champion Fabio Turchi at the PalaTrento in what the main event of a show presented by Matchroom and Opi Since 92.

The 12-rounder started slowly with Florence’s Turchi on the front foot but already in the second round a straight right stunned the Italian southpaw. Turchi was the aggressor in the third round also but McCarthy remained calm, boxing efficiently from the back foot and countering with straight right and right hooks.

Finding it difficult to reach the target, Turchi lost his composure, leaving his foe to pile up points by boxing effectively from distance.

In the sixth Turchi forced the pace, drawing McCarthy into a slugfest in mid-ring but his left eye was already swollen, courtesy of McCarthy’s straight right.

In round seven a head clash left Turchi with a nasty gash on his left cheekbone and although the Italian tried to raise again the rhythm in the eighth by working the body he had no notable results.

The left eye was completely closed and checked two times by the ring doctor called by Spanish referee Francisco Alloza Rosa. Turchi tried to use his vaunted power and overhand right crosses but McCarthy was able to maintain his composure under fire, countering again with precision.

At the end of 12 hard-fought rounds, judges Massimo Barrovecchio (Italy) and Victor Loughlin (UK) both had McCarthy ahead with a fair 116-112, while Guido Cavalleri (Italy) rendered 116-112 for Turchi, unbeaten in his previous 17 fights.

Matteo Signani, 40 years old and from Cesena, won the vacant middleweight European belt with a win over the Armenian Gevorg Khatchikian, 31, living in Heerlen, Netherlands. A fairy tale conclusion favoured by two judges in a debatable home decision.

Signani is a very passionate guy who has been Italian champion and failed in a previous attempt at the European title. He fought very bravely, favoured by a slow pace. He tried to control the fight while the Khatchikian was circling the ring but the Armenian was the most effective puncher with his straight right hand.

The Italian had his best moment in the middle rounds, upping the rhythm with a good use of his left jab. But Khatchikian regained control with his more precise and powerful rights.

Cut on his left eyebrow from the 11th round, Signani fought a furious last session, letting his hands go and hurting several times the Armenian with his left hand. Judges Robin Dolpierre (France) with 115-113 and Fabian Guggenheim (Switzerland) with 116-112 gave him the European title while Francisco Alloza Rosa had Khatchikian ahead 115-114.  Referee was Victor Loughlin.

Featherweights Francesco Grandelli from Turin and Reece Bellotti, from Watford but of Italian heritage, gave the fans the best fight of the show in a 10-round classic boxer vs puncher match-up.

This writer had the fight even but many rounds were close. Judges Francisco Alloza Rosa and Guido Cavalleri scored 96-94 and 96-95 respectively for Grandelli, while Victor Loughlin had Bellotti ahead 96-95. Referee was Massimo Barrovecchio.

Grandelli, 25, is a former Italian champion with limited power looking to step up in class. At first he went around the ring trying not to offer a target to the heavy-handed Bellotti, switching frequently from his orthodox position.

Bellotti soon realised he had to close the distance and work the body, using very hard uppercuts with both hands. Grandelli, who has fast hands and was perfectly prepared, made good use of his left jab, adding a nice right uppercut in the fifth round to stop the pressing Bellotti.

The Watford man worked the body in the sixth, also landing a right hook on Grandelli’s jaw that hurt the Italian boxer. Bellotti also enjoyed good success in the seventh and eighth.

Maybe nervous because of the WBC open scoring system (a minor title was on stake) that revealed the scores after  eight rounds – the fight was even for two judges – Bellotti forced the action in the last two rounds, losing composure and giving Grandelli the opportunity to counter effectively with both hands. A couple of punches stiffened Bellotti’s legs slightly and the English fighter lost the last two rounds.

The Verdict Big win away from home for McCarthy, but Bellotti just misses out.