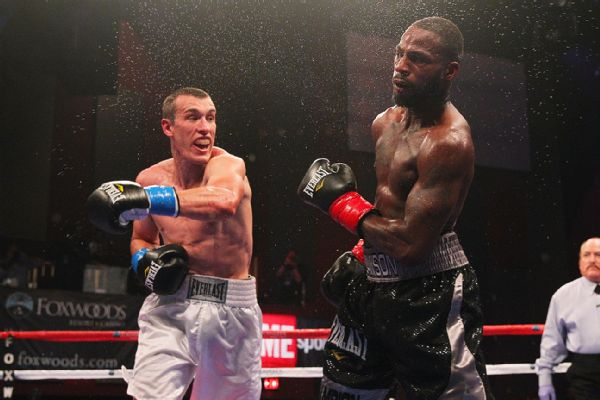 HUGE betting underdog Tommy Karpency of Adah, Pennsylvania shocked former world light-heavyweight champ Chad Dawson on Saturday night, winning a 10-round split decision in “Bad” Chad’s hometown of Connecticut. Improving to 24-4-1(14) with the biggest victory of his career, and “one of the best moments in my life”, Karpency now hopes for further big fight opportunities.

Tommy has boxed in Britain before, losing to Nathan Cleverly in 2012, and he says he would “love” a fight with Carl Froch.

Q: As you said post-fight, you feel you did more and landed the more telling blows. But with the fight being in Dawson’s hometown, did you feel you’d get the decision?

Tommy Karpency: “You know, in my heart, I know I won and I knew then I’d won. But boxing, sometimes the judges are not friendly. But this time they got it right. I landed the more effective blows and all he landed on me were jabs – that was it.”

Q: You did some good counter punching in the fight, was that your game-plan going in?

T.K: “Our gameplan going in was for the very best Chad Dawson. He’s on the comeback trail and he was on weight and in shape for the fight. But I only had two weeks of sparring, which is no way enough for a fight of this magnitude. The counter punching, that started after the first round. I said to myself, ‘hey, I can box with this guy.’ I had the speed. And also, as I’d not had that much time to get ready, I knew I had to make my punches count, so I threw a lot of counters. At times, after I’d buzzed him in the earlier rounds, I really wanted to attack him, but I knew that if I didn’t get him out of there, I might not have enough left in the tank to get through the fight. And I held back a bit. I really think that if I’d had more time to get ready for the fight, I’d have walked him down. He never hurt me or fazed me once.”

Q: What’s next for you, and do you feel the sky is the limit for you after this big win?

T.K: “Yes, the sky is the limit. Before this fight, ESPN had Dawson ranked as the No.6 light-heavyweight in the world, and Ring Magazine had him at No.5. And I beat him over 10 rounds in a boxing match; it was a controlled performance. I proved that I belong with the elite at light-heavyweight. I want to fight the best in the world. I’ll go anywhere and I’ll fight anyone. You’re from England – I’d love to come over and fight Carl Froch if he wants to fight at light-heavyweight. He’s the main man right now. What people might not know about me, is the fact that I had no amateur experience. I began boxing at age 19, and I’ve learnt from my losses – to Nathan Cleverly, to Andrzej Fonfara and to [Karo] Murat. Now I’m a better fighter and I’m finally seeing the hard work and the sacrifice pay off.”

Q: How much notice were you given for the Cleverly fight back in 2012?

T.K: “I was actually given quite a bit of time for that fight. I have no excuses, I was beaten by the better man. What surprised me was his punch output, his volume of punches. I have no excuses there, but I wasn‘t as good then as I am now.”

Q: Sergey Kovalev crushed Cleverly as you know – how do you see Bernard Hopkins doing against Kovalev when they meet?

T.K: “I see that fight going two ways: either Bernard Hopkins has an early night, or Kovalev has a very frustrating night. I’m anxious to see, is Kovalev the elite banger he’s appeared to be? We really don’t know yet. I’m interested to see what happens when he [Kovalev] fights someone he can’t hit.”

Q: And who is the best in the world today at light-heavyweight in your opinion?

T.K: “I’ve gotta go with Hopkins. He’s the master. Kovalev is a close second, so we’re going to see who’s the best on November 8.”

Q: You’re on a three-fight win streak and it must have been satisfying for you to avenge your very first loss, when you outpointed Rayco Saunders three fights ago?

T.K: “It was and it felt great. The first fight between me and Rayco was a very close and competitive fight. The rematch, he wasn’t on my level at all and that shows me how far I’ve come as a fighter and how much I’ve improved.”

Q: Ideally, when would you like to box again?

T.K: “I’ll fight whoever, whenever. I don’t have any specific date or name in mind. I’m always in the gym, in shape, so I’ll see what opportunity comes. But I want to fight the best in the world. It’s just a ring, with two men, and it doesn’t matter where the fight takes place. I’ll leave it to my manager, Pat [Nelson], who has steered me right this far. We’ll keep going the way we’re going and I’ll keep improving as a fighter.”

Q: Were you at all bothered by what Dawson had to say, that the decision against him was B.S and that he was robbed?

T.K: “I have a lot of respect for Chad Dawson. He was probably frustrated at having lost. But like I said, I know in my heart that I won the fight. He might feel that way too, but I know I can put my head on the pillow and sleep well tonight.”

Q: Would you fight him again?

Q: Finally, Tommy, you were a 25-1 underdog going into the fight! Did your friends have any bets on you?

T.K: “(laughs) You know, after the fight, a few of my friends called me and said I was such a big underdog, but that they didn’t risk any money on the fight, even if they are my friends and all! But I was a huge underdog and the fight ended up being a major upset.”