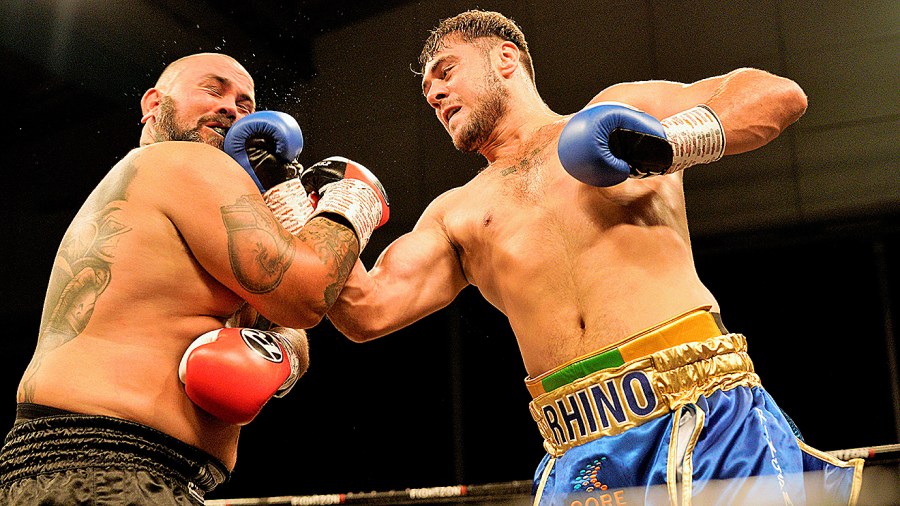 Tomlinson beaten for the first time but joy for Allen on the undercard, writes Andy Whittle from ringside

DON’T say it too loudly around Leeds in the run up to this weekend’s show but Mexican visitors to these shores are on something of a roll at the moment – and certainly don’t mention Mexico to promoter Dennis Hobson and his team if you happen to find yourself in their company as they must be heartily sick of their bill toppers coming unstuck against the Latin hombres.

Previously unbeaten welterweight Anthony Tomlinson was the latest to fall victim when at Ponds Forge he was counted out by referee Howard Foster 85 seconds into the ninth and penultimate round of his bout against experienced 33-year-old Mexico City resident Dante Jardon. Back in 2013, and still a super-featherweight, Jardon had been halted himself in the ninth by Takashi Miura while challenging for the WBC belt in his only previous trip overseas.

There wasn’t a deal of daylight between the pair in the early rounds as both waited for their opponent to commit but Jordan had been finishing rounds strongly and from a fifth round that saw him heavily bloody Anthony’s nose he began to look as if he might just silence the locals.

Tomlinson, on the front foot, recovered a little lost ground in the sixth but by the eighth was spitting out blood and with the brisk pace of earlier slowing he was being clouted by increasingly regular clubbing rights by an opponent growing quickly in confidence, until one such punch sent him over backwards. Anthony was up to one knee as Mr Foster reached ‘seven’ but made no attempt to beat the count.

Conisbrough heavyweight David Allen was back punching for pay again in a scheduled four against heavily tattooed Italian Andrea Pesce who was suffering a disappointing run of form.

The 36-year-old Roman was rocked by a clubbing right in the opening moments and it never improved from that point. Well beaten in the opener he took a knee after coming under particularly heavy fire mid-way through the next before a further spell of pressure on the resumption prompted the intervention of Bury referee John Latham 50 seconds shy of the half-way mark.

After registering three straight inside the distance victories Chorley super-middleweight Mark Jeffers went in against Michal Ryba of Czech Republic in a scheduled eight and one wondered if the visitor, with all but one of his six victories coming inside the distance, might just provide the Magherafelt born puncher with a sterner test. As it turned out he did but he was bested from start to finish by the increasingly dominant Michael Jennings-trained man, who ran out an 80-71 winner. Ryba was counted by referee Brook late in the fourth when after shipping a right hook only the ropes prevented him going over.

Local super-featherweight Sufyaan Ahmed, beaten last time out whilst contesting the Central Area title, was hopeful of a return to winning ways against Birmingham novice Jahfibus Faure but he came unstuck as Faure, landing the more eye-catching single shots and busier down the straight was awarded a 39-38 victory by referee Andy Brook.

Busy Lee Connelly from Killamarsh in Derbyshire went the distance for the second successive week, losing out 40-36 to popular Sheffielder Levi Kinsiona who, in another bout overseen by Mr Brook, kept it long behind the jab.

In bouts over four-twos, unbeaten pair Stevi Levy and Katie Healy hang on to their 100 per cent records. King’s Lynn’s Stevi was up first in a bout overseen by John Latham and she ran out a 40-36 winner against Bratislava’s Claudia Ferenczi who, happy to lean on and grab whenever the opportunity arose, only really came to life late on after a head clash left her cut by the eye.

Birmingham’s Healy, having outpointed Ferenczi on her debut back in May, mirrored Stevi’s achievement by doubling up the jab, pressing throughout and taking all four rounds against Poland’s Karina Kopinska. Andy Brook refereed.

Leaving the vest behind, North Shields puncher Thomas Hodgson, National champion in 2017, was the latest to exchange pleasantries with Blackburn’s Naeem Ali and in front of a large following he turned in a cracking performance, one of the best debuts I’ve seen for some time. Referee Mr Brook scored 40-36 for Hodgson who bested Ali by quite a distance.

Verdict: Good to be back indoors in Sheffield but no happy ending in the main event