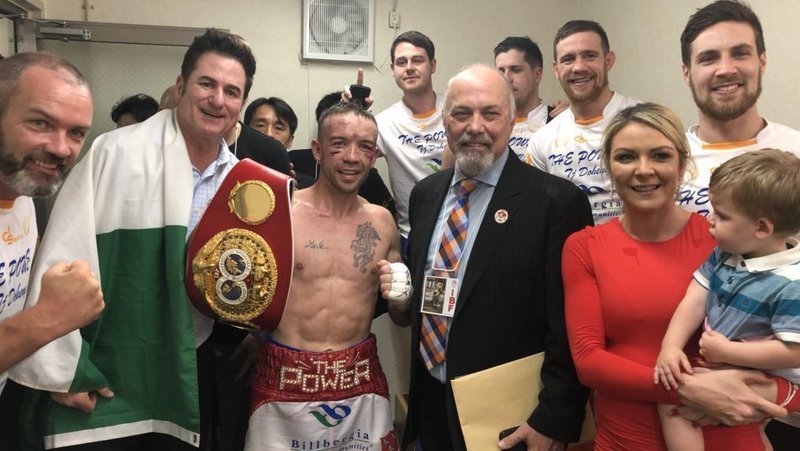 TJ DOHENY became Ireland’s third active world boxing champion when he defeated local favourite Ryosuke Iwasa to lift the IBF super-bantamweight title at the Korakuen Hall in Tokyo. After 12 rounds, all three judges favoured Doheny via scores of 117-112, 116-112 and 115-113.

TJ Doheny defeated Carl Frampton as an amateur way back in 2006, and now wears the world belt once owned by the Northern Irishman after a courageous display on foriegn soil.

Ryosuke was the favourite and the oddsmakers appeared to be on (and in) the money during the early going as the Japanese champion opened a deep gash under Doheny’s eye at the close of the second round. As is often the case between two southpaws the action was scrappy, and as Doheny swung wildly and inaccurately, it looked like his 19-fight unbeaten streak might reach its end.

But the Portaloise man – who moved to Australia after turning professional in 2012 – started to adapt. By the middle rounds the action was cleaner and Doheny operated smartly behind his jab. The home fighter’s body was also targeted with accurate wind-sapping blows.

However, it was a tight encounter throughout. Doheny continued to exhibit steady and educated pressure but Ryosuke, despite fading down the stretch, remained a threat. The Irishman ended the bout with injuries to both eyes.