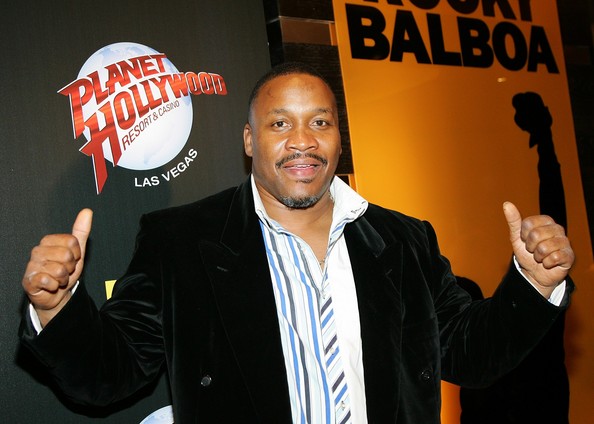 THEY were collectively known as “The lost generation of heavyweights,” and they rose to prominence in the 1980s, vying for prominence in a decade ruled first by Larry Holmes, and then by Mike Tyson.

Men from largely impoverished backgrounds names Michael Dokes, Pinklon Thomas, Trevor Berbick, Greg Page, Tony Tubbs and Tim Witherspoon took turns holding one or more of the available ‘alphabelt’ titles as they attempted to pull in some of the money that was out there for the big men of the sport. A number of these fighters from “the lost generation” are now dead – Dokes, Page and Berbick all going out in particularly sad and gruesome fashion. Yet one man, a gifted fighter who was arguably the best, or, if you prefer, the king of T.L.G.O.H, is alive and kicking and doing very well in life.

Known as “Terrible” Tim during his long career (the nickname given to him by the incomparable king of all kings, Muhammad Ali), Witherspoon also has some story to tell. And the Philadelphian, now in his late fifties yet looking years younger, has told it in a book available exclusively via www.timwitherspoon.net just in time for Christmas.

Witherspoon, who briefly held both the WBC and WBA heavyweight titles, experienced just about as much as is imaginable for any prize fighter. Yet through all the bad times (and there were good times too), Tim has come out of it all pretty much unscathed. One of the lucky ones perhaps? Certainly, when you look at the sad fate that met some of ’Spoon’s former ring rivals, Tim survived those days of stealing, of intimidating, of cheating, of drug taking and of guns and of jail time with no obvious ill-effects showing. Drugs especially all but destroyed so many of the 80s heavyweight rulers that were controlled by Don King, yet here is Tim today – whether he indulged in that lifestyle or not (as will no doubt be revealed in the book) – looking, sounding, and feeling great.

The life story has been a long time coming to the page and there are, as Witherspoon told me recently, many “shocking revelations” in the bio that was co-written by the former champ and Ryan Danes.

“It’s my life story, it’s about my family, my upbringing, my boxing career, my times with Don King – everything,” Tim says of his book, entitled “Terrible Times.”

“This is the first time I’ve been able to tell my side of the story and it’s been long overdue. It’s taken so long, partly because some of the people involved are serious people, serious people! And some of them are still alive. I had to wait, so that nobody would get hurt by what’s in the book. During my boxing career, which really began in 1976, a long time ago, I had to deal with so many serious people. During my career, I was told to my face a number of times, ‘you’re gonna fight or else!’

“Now I’m putting my story out without hurting these individuals. I fought during what they called ‘The lost generation of heavyweights,’ with guys like myself, Mitch Green, Tony Tubbs, David Bey and other guys. But there was only me who was willing to stand up and talk against what we were going through; about how we were being mistreated. It was due to what we went through that guys like Bernard Hopkins and Floyd Mayweather had a chance to flourish. Today, it’s harder for a fighter to get ripped off, by a promoter or by anyone else.

“There are things in there that will make you go, ‘wow!’  It was a crazy time. It’s a crazy story and it should have been told a long time ago.”

I’m pretty sure that great job of selling his book will assure Tim plenty of buys during the Christmas season. Yet when recalling his long career – pro debut in 1979, final fight in 2003 – Tim has already shared some fascinating things. Indeed, after reading this lot, you may well salivate over what could well be waiting to be discovered inside those pages.

Here are some of Tim’s anecdotes:

Witherspoon on his epic fight with Holmes:

“Larry Holmes jumped over a chair to try and get at me (in 1983, ahead of their world title fight won by Holmes via 12-round split decision) and he also threw a towel in my face. But they never let it get out of hand, but if it had it would have been more publicity for the fight and we’d have sold more tickets!

“I was a young kid in that fight, and I didn’t really know what was happening. That fight came real quick in my career (just 16 bouts in). I asked my team ‘Are we really going for the title already?’ But I took him to a real close split decision and a lot of people thought I’d won. Put it this way, nobody has ever told me I lost it. But he was real experienced, that was a big factor in the fight, that and  because he was chasing Rocky Marciano’s record (of 49-0). That was great publicity and it was in all the papers. They weren’t going to let a young kid like myself come in and ruin that.”

Witherspoon on the best KO’s he scored:

“My knockouts of James “Quick” Tillis and James Broad were right up there for me. But my best win, which came by late KO, was over Frank Bruno in England. I knew more than Bruno. I chopped wood and stuff like that for that fight and I was in shape. They gave me 12 cases of orange juice in London – my team never knew about it – and that put some weight on for me. Anyway, looks can be deceiving. I was in shape. Bruno had a great team around him, but I knew more than he did. Plus, I had a much better defence and of course I could punch.

“The Bruno fight was a special time for me, my best win. But I couldn’t believe the negativity that a whole lot of people had for Bruno in his own country; his countrymen didn’t believe in him. If all of the English fans, and I mean all of ‘em, had gotten behind him, maybe he’d have done better. But there was so much negativity aimed at Frank Bruno and that affected him I believe. He was a gentleman, Bruno – he called my hotel the day after the fight to see if I was okay. It was a tough fight.”

Witherspoon on watching the incredible George Foreman-Ron Lye fight – one of his favourites – at home on T.V in 1976:

“The George Foreman-Ron Lyle fight is a real classic, have you seen it? We watched that live on T.V at home and we were all going crazy, and then my sister turned the T.V over! My brother went crazy and as he got up he hit his head on the T.V! He cut his head and needed stitches (laughs). That was a crazy fight!”

“I was getting paid so much money to work with Ali. I couldn’t believe it. I asked his team, ‘Is this all for me?’ It was great to be around Ali, even though he was getting sick by then (1980). He told me to hit him in the head in sparring, and I told him no way was I gonna do that. I made sure I only hit him in the body. They all knew Ali shouldn’t have fought Larry Holmes, but the fight went on. Holmes beat a sick Ali. Ali gave me my big break and he was the one who started calling me “Terrible Tim!”

“I sparred Gerry Cooney at The Catskills. My trainer told me how to deal with Gerry Cooney: to position myself the right way and to do certain things, and I did pretty well. I sparred with him but it didn’t last that long. I’m not gonna say what happened, but I did pretty well. He had busted up all his sparring partners apart from me.”

“People were afraid of Don King. He had a lot of money and a lot of power. I believe he had mob connections of some kind. He robbed me bad in the Bruno fight!”