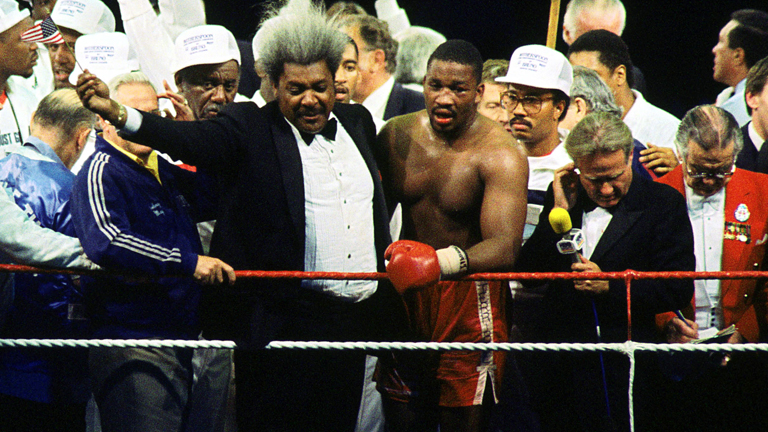 THE nation that once rooted against “Terrible” Tim Witherspoon appears to have fallen in love with him.

“I’ve been over to Britain so many times, so many people know me,” said the fun-loving Philadelphian who had two spells as a world heavyweight titlist in the 1980s. “I have so many friends over there, in Sheffield, Doncaster, London…”

Witherspoon is the most gregarious of guests, equally at home at plush hotels and working men’s clubs. Wherever he goes, he enjoys the company of people, and if he’s paid enough, “Terrible” Tim might even get the gloves on and “playfully punch someone in the face.”

There have been some bizarre exhibitions in recent years, including one at a social club in Wolverhampton that was like a scene from 1962 film Requiem for a Heavyweight. Witherspoon faced ex-Midlands Area cruiserweight champion Nigel Rafferty and the support act was an Elvis Presley impersonator.

Three decades ago, Witherspoon gatecrashed a British boxing party. The joke from across the pond had been for years: “If all the heavyweights in Britain were laid out end to end, I wouldn’t be at all surprised,” but, with his physique and punch, Frank Bruno demanded to be taken more seriously. Though he capitulated against James “Bonecrusher” Smith in 1984, Bruno remained a national treasure and with clever matchmaking, he climbed back into contention at an exciting time for the division.

With the backing of £15m from American broadcasters HBO, promoters Don King and Butch Lewis were trying to unify the heavyweight titles.

Michael Spinks was the IBF champion after twice beating Larry Holmes, Trevor Berbick had the WBC belt, and Witherspoon was the WBA titlist, with the late Cus D’Amato’s protégé, the fearsome Mike Tyson, closing in on a shot.
Witherspoon had taken the WBA title from blubbery Tony “TNT” Tubbs, and after traces of marijuana were found in the new champion’s post-fight blood test, a rematch was ordered.

The public and television bosses had little interest in seeing a repeat of that soporific 15-rounder, and Tubbs was offered money to step aside in the hope that a more watchable and lucrative defence against Bruno could be agreed.
Bruno was well placed in the rankings having bombed out the respected Gerrie Coetzee with right hands in just 110 seconds – a result that gave him “a certain aura,” according to HBO Senior Vice President Seth Abraham – and after negotiations between Mickey Duff, Bruno’s promoter, and King, the fight was set for Wembley Stadium on Saturday
July 19, 1986.

Witherspoon enjoyed his first trip to London. Too much. He told Boxing News: “I was sharp before I came to London, but when I got there I relaxed a bit too much. I had never been to London before and I did train hard, but I ate and enjoyed myself too much as well. We ended up changing hotels and moving to Basildon. As soon as we got there, somebody delivered 12 cases of orange juice to my door. I was drinking it after training and my trainer saw what I was doing and said: ‘What? There’s sugar in this!’ I was heavier than I should have been.”

On the scales, it looked a mismatch.

Bruno was a sculpted Adonis, while Witherspoon wobbled like a sleepy-eyed walrus. The bookmakers were convinced. They made Bruno, the younger fighter by four years at 24, a slight betting favourite. Witherspoon saw things rather differently.

“I got a lot of confidence from watching Bruno’s fights,” he said. “I knew he was limited. He was powerful, but I had a good defence. I thought all I had to do was get in shape and hit him on the chin. But when I hit him on the chin, he took it.”

And when Bruno hit Witherspoon on the chin in the early rounds, he felt it.

“He did hurt me,” admitted Witherspoon. “He caught me with a left hook to the top of the head in the third round and I stumbled. Don King told me afterwards he was going crazy. He thought I was going to lose. It was a hard fight, but I was having fun too. It wasn’t as hard as it looked.”

What it looked like was a gruelling slog. Tim fought with more urgency after swelling appeared under his left eye in the eighth, and inflicted a similar injury on Bruno as the action ebbed and flowed.

After 10 rounds, Witherspoon was ahead on the scorecards – by margins of three, three and two rounds – but with five rounds to go and the champion’s left eye swollen almost shut, there was still hope for Bruno and the 40,000 fans who chanted his name.

Early in the 11th, both connected flush with heavy punches – and it was Bruno who gave ground.

“He was fatigued,” said Witherspoon. “That was my chance and I went for it.”

Witherspoon slung a huge right hand that crashed onto Bruno’s jaw and made his knees dip dramatically, then drove him into a corner.

With the challenger sitting defencelessly on the ropes shipping right hands, the towel came in and Venezuelan referee Isido Rodriguez waved it off.

“I had better tricks than Bruno,” said Witherspoon. “He was in phenomenal shape, but didn’t really have a plan. His punches were all jab, right, left hook, and his defence was just holding his hands up. I beat a lot of guys because I just knew more than a lot of them.”

Witherspoon had a better boxing education than most. He took up the sport at “20 or 21” after injury prevented him completing his sports scholarship at Lincoln University in Missouri and pursuing a possible career in American football.

“All my friends back home were boxing,” said Witherspoon. “My brother Anthony, [former IBF 154lb champ] Buster Drayton. There were so many good fighters around Philadelphia in the 1970s.”

Witherspoon decided to join them and had “five or six” amateur bouts before turning professional.

In “Slim” Jim Robinson, he had a knowledgeable coach. Robinson fought Bob Foster and sparred Sonny Liston, while Witherspoon, when still a novice pro, sparred Muhammad Ali, or what was left of him, before he fought Larry Holmes in 1980.

“I can’t believe they let the Holmes fight happen,” said Witherspoon. “I knew Ali was sick. I couldn’t hit him hard in sparring because I sensed something was wrong. It was too easy. I was thinking: ‘This is Muhammad Ali, it can’t be this easy.’ He was easy to hit and as the weeks went on, he didn’t improve.

“He got mad with me because I wouldn’t hit him hard to the head. I hit him as hard as I could to the body, but I only ever slapped him to the head.”

Witherspoon got his chance to challenge Holmes in just his 16th fight – and he almost beat him. Graham Houston, at ringside for Boxing News, remembered: “Tim really hurt Holmes, but just didn’t press the fight enough and allowed Holmes to come back with the jab and steal the decision, which was an unpopular verdict of course.”

For Witherspoon, boxing is all about defence – or what he sometimes calls “slick tricks.” Those slick tricks – his right hand was cupped against the left side of his chin to protect himself from right hands, and he was able to outjab bigger opponents – enabled Witherspoon to be competitive on the fringes of world class into his forties, before finally retiring in 2003.

Historians might remember him as an unfulfilled talent which, given that he was a two-time world champion, says much about his ability.

Witherspoon was never the most driven of fighters – and didn’t like the business, telling the New York Times during his career: “It’s like we’re racehorses. They race us until we drop and then they shoot us. And if we win, they tie a blue ribbon around our neck.”

Looking back, he said: “When I started getting ripped off, I didn’t really want to fight and that’s
why I didn’t reach my potential.

“I only made $95,000 from the Bruno fight and I was supposed to get $2m. I knew I had to make a living, but it was hard to focus on boxing when I knew I wasn’t going to get paid what I was due. It’s hard to do boxing and the boxing business.”

Witherspoon took Don King to court in 1992 – “I wanted to bring him to justice” – and was awarded £1m. “People say to me: ‘You beat Don King’,” said Witherspoon, “but I don’t think so. It was a $20m law suit, but on the advice of my lawyers, we settled on $1m. But I don’t want to spend the rest of my life saying: ‘Don King this, Don King that.’ I saw him at a function in Las Vegas a few months ago and hugged him. It’s in the past.”

Witherspoon would rather look ahead, to Kash Ali’s next fight, among other things.

The Rotherham heavyweight contacted him on Facebook and after a few training sessions together, Witherspoon was in Ali’s corner at York Hall in Bethnal Green.

Ali improved to 10-0 by chinning Midlands Area champion Paul Butlin in the dying seconds of their four-rounder with a right hand not dissimilar to the sort Witherspoon clobbered Bruno with three decades ago.

“I didn’t have a whole lot of time with Kash,” said Witherspoon.

“I was trying to teach him to block and slip and throw the overhand right – and that was the punch that knocked the opponent out. Kash has potential. I just need to be with him all the time.”

Witherspoon, who has a daughter with an English woman, is sure to get plenty of bookings while he’s here.