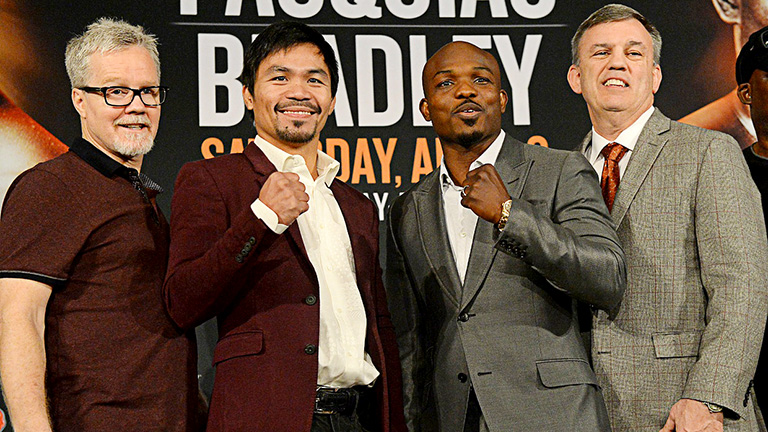 But the WBO will afford the winner of Manny Pacquiao vs Tim Bradley 'special recognition', writes Olly Campbell

TIM BRADLEY, 31-1-1 (13), has vacated his WBO world welterweight title ahead of his April 9 clash with Filipino superstar Manny Pacquiao, citing an inability to fulfill his mandatory obligations.

Bradley had been ordered to face New Yorker, Sadam Ali, 22-0 (13), though in signing for a more lucrative third meeting with Pacquiao, was forced to officially inform the sanctioning body by letter of his position.

“As you know I will be fighting Manny Pacquiao on April 9, 2016 in Las Vegas, NV,” Bradley wrote. “To accept this fight invariably means I cannot comply with my mandatory obligation and must forgo the mandatory against Sadam Ali, as ordered by the WBO. This is a difficult decision, but one I have to make to give fans the best fights as well as allow myself the toughest and biggest fights possible from both a competitive and financial perspective.”

It’s not all doom and gloom for ‘”Desert Storm” however, as despite the loss of his world title, WBO president Paco Valcarcel has informed Bradley that the sanctioning body will honour the winner of the Pacquiao fight with a “special recognition”.

“You have been an outstanding, honorable and loyal WBO junior welterweight and welterweight champion of the world and the doors of the WBO will always be open for you,” Valcarcel wrote Bradley in reply. “I am pleased to inform you that we are preparing a special recognition for the Pacquiao vs. Bradley III winner — two remarkable fighters and worthy ambassadors to the WBO. Wishing you all the best.”