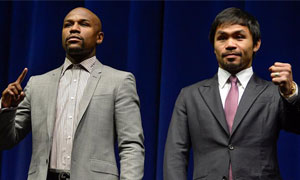 WITH just over a week remaining before Floyd Mayweather and Manny Pacquiao are set to collide in Las Vegas, tickets for the MGM Grand extravaganza have gone on sale to the public. But the chances of scooping entry to what looks likely to be the richest boxing match in history are unlikely.

The labyrinthine hotel and casino, situated on the edge of the Las Vegas strip, hosts the battle inside its Garden Arena but only 1,000 tickets – costing between $1,500 and $7,500 – have been made available to the public. It’s thought that the other 15,500 spaces will be divided between the two camps, the promoters, and the MGM’s rich and famous clients. It’s expected that no ringside tickets – with a face value of $10,000 – will go on sale and have been changing hands for $250,000.

There had been some confusion – and concern – over the late sale of tickets but Pacquiao’s promoter Bob Arum insists the fight was never in danger. The battle for boxing supremacy, and all the spoils in the welterweight division, has been five years in the making and the source of much frustration among the boxing world. Amid fears of the fight collapsing again, after reported arguments between Pacquiao’s Top Rank and Mayweather Promotions, Arum said that “all issues” had been resolved.

It’s estimated that the fighters will split a bounty of at least $300m, but those hoping to witness the eagerly awaited showdown will have to be content with watching on a screen unless they too have piles of cash at hand.