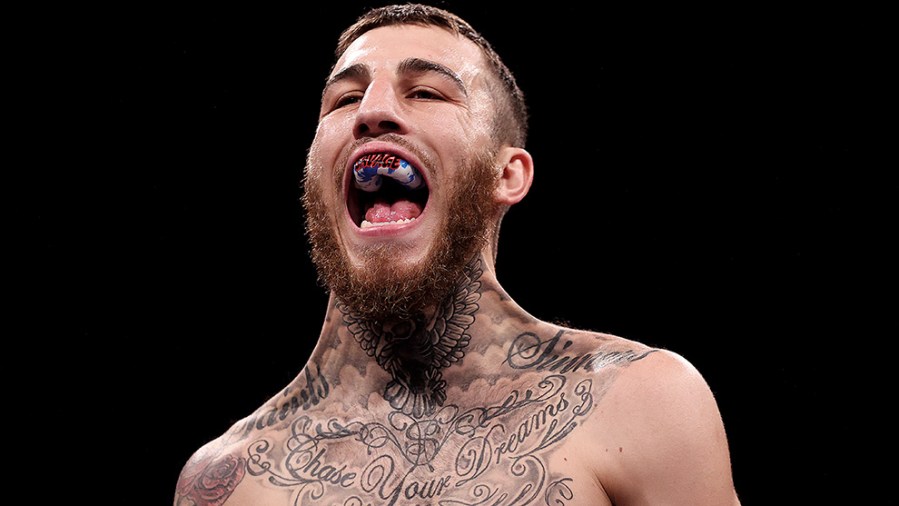 Crowd-pleaser Eggington readies himself for another thriller but Wilson Bent and Denny could steal the show, writes Matt Christie

SQUINT when you’re watching Sam Eggington fight and, with a little imagination, you’ll be transported back in time to the 1920s when fast-paced slugfests were very much the order of the day. The svelte Midlander’s love for exchanging full-bloodied thumps to the face would have seen him thrive in an era when boxers would get knocked out one week then flatten some poor sap the next.

That all-action, carefree style makes Eggington, still only 28, both a credit to the sport and a concern. The amount of humdingers he’s endured during his career likely won’t do him any favours when he’s old and grey but, regardless, there surely isn’t a more consistently exciting British fighter active today.

The aptly nicknamed “Savage” embarks on his 39th professional outing on Saturday night (June 25) at the Coventry Skydome – his third consecutive appearance at the venue – when he takes on Polish hope, Przemyslaw Zsyk, in a 12-round super-welterweight contest. It will be sanctioned by the IBO as a ‘world title fight’ even though Eggington – whose last two fights took place at middleweight – is rated 13th in the lightly-regarded sanctioning body’s 154lb rankings and Zsyk is down at 40th.

It marks Sam’s return to Sky Sports after a three-fight spell wowing TV audiences on Channel 5, beating Ashley Theophane, Carlos Molina and, in our British fight of 2021, emerging from a barnstorming war of attrition with Bilel Jkitou with his arms raised. He’s retained the services of promoter Mick Hennessy who engineered Eggington’s return to both form and prominence. Trained by the walking, talking boxing encyclopaedia, Jon Pegg, the 28-year-old is enjoying something of a renaissance after a period of indifferent form seemed to signal the end of his time at the top.

Back in 2017, when he was a darling of Matchroom and a favourite of Barry Hearn in particular, the career that began with a desire to be a journeyman looked set for lift-off after he pummelled Frankie Gavin, ended the career of Paul Malignaggi and ripped the European welterweight title from Ceferino. But then it all started to go wrong. He lost three of his next six, culminating in a one-sided defeat to Liam Smith.

But Eggington, a master of dusting himself off and trying again, then won four on the bounce to secure a top of the bill spot at Matchroom HQ against Ted Cheeseman in August 2020. Coming just a week after British boxing had been allowed to restart following the first wave of the pandemic, watching Cheeseman narrowly outpoint Eggington in a toe-to-toe thriller was a much-needed tonic. That was the last time the Midlander appeared on Sky Sports and the broadcasters will be hoping for more of the same in Coventry.

Zsyk, 18-0 (6), is highly-regarded in Poland. This will be only his second excursion outside of his country – he has visited the UK in the past as a tourist – and the first time he has fought away from home. Nonetheless, he expects to have some travelling support in the arena. But a look at his record suggests he’ll struggle against someone as accomplished and experienced as Eggington.

“I don’t think anyone can now accuse me of [just] fighting weaklings,” he said. “He [Eggington] has 31 wins, which is a lot. I know I am able to win the match. I watched his fights and he is really good.”

Zsyk, 30, seems to lack serious one-punch power but is a busy, come-forward fighter. He tucks up when in close, fires his jab and hooks from a crouch. To call him defensively sound would be a stretch, however. His style, typically ‘European’, would appear to be one that Eggington thrives against.

The pick is for Eggington, presuming this isn’t the fight when all the wear and tear becomes glaringly apparent, to grind out a late stoppage in a typically crowd-pleasing affair.

As has become Boxxer’s custom in recent events, there is an enticing domestic ‘trade fight’ on the undercard. Coventry’s River Wilson Bent, 12-0-1 (5), and Rowley Regis’ Tyler Denny, 13-2-3, embark on a welcome return of their November ruck ended in a technical draw after six-and-a-half rounds. The vacant English middleweight title will again be at stake.

At the end of their first encounter there were brief celebrations for Denny when the referee stopped the fight due to a bad cut on Wilson Bent that had opened in round six. Denny believed the wound had been caused from a punch, Wilson Bent claimed foul while the referee ruled an accidental clash of heads. The cards went three different ways – Denny up on one, Wilson Bent leading on another while the third had it all square.

Replays seemed to show that Denny was in fact correct, that the offending collision had been initiated by Tyler’s left hand. It was hard luck on Denny who afterwards told Channel 5 cameras that he wanted to retire in protest to the injustice. We can expect the sequel to be a heated affair.

Wilson Bent had the edge in speed back then but it was Denny’s tenacity that seemed to be pulling the fight in his direction at the end. Both will know what they need to do to win. Wilson Bent will look to box smartly and not be drawn into the physical battle that Denny triggered last time. It’s a tough ask in a bout that could genuinely go either way.

Tentatively, we go for Denny to replicate the success he was having in the first fight and win a close, and perhaps contentious, decision after 10 rounds.

Another 10-rounder sees Slough’s highly-regarded Adam Azim, 4-0 (3), take a step-up of sorts against 24-year-old Belgian Anthony Loffet, 8-1 (2). Azim, 20 years old and trained by Shane McGuigan, looks like a star in the making. Loffet, to be frank, does not. Azim should be able to win this one inside schedule.

Also on the card are two recent winners of the Boxxer Series, Cori Gibbs and Dylan Cheema. Gibbs, 16-0 (3) and 28 years old, should be too fresh and skilled for 35-year-old Spaniard Carlos Perez, 17-6-2 (2) over eight and expect the flashy Cheema, 5-0 (1), to barely break a sweat in his four-rounder with Stu Greener, 3-8 (1). Another straightforward victory should go Karriss Artingstall’s way as the Olympic bronze medallist makes her debut against robust Lithuanian veteran, Vaida Masiokaite, 2-16-5 (1).