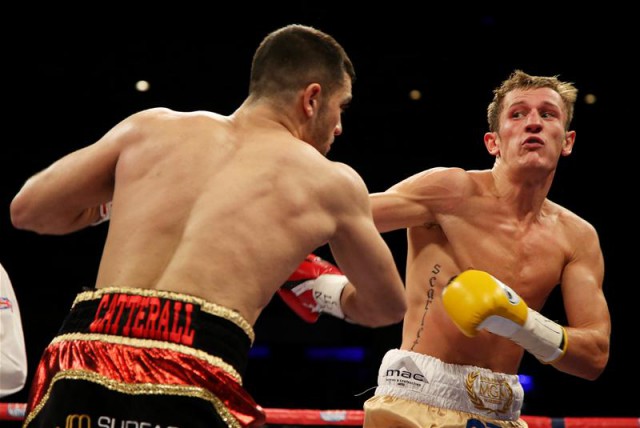 To rebuild after a devastating loss, Thomas Stalker has linked up with trainer Danny Vaughan, writes John Dennen

THOMAS STALKER, the captain of Britain’s last Olympic team, suffered a devastating defeat when he fought Jack Catterall in October. To rebuild he has joined forces with trainer Danny Vaughan.

“Nothing went right for me. I was just ashamed at how bad I boxed,” Stalker said of the loss. “But its not like I’m not with [Seamus Macklin] now I got beat. He didn‘t have the time as much, he‘s based back in Birmingham. I‘m staying in Marbella. I’m happy I’m with Danny Vaughan. I’ve got a big year coming up. I’m trying to do lightweight as well for this fight. I’m going to weigh at 9st 12lbs and see how I feel.”

He’ll be doing his strength, conditioning and nutrition with Jason Lowndes, aka “The Taffanator”. “I didn’t diet in camp,” Stalker explained. “I was three pounds over on the morning of the weigh in. I ended up going two pounds under… It’s my own fault. That’s not why I got beat. Obviously I didn’t turn up on the day, I boxed terrible. It’s a learning curve now.

“Taff’s done my diet plan now. He does all my food. So it’s nice to have a plan and see the weight gradually coming off.”

Thomas insists, “I got beat by the better man on the day but I’m just saying you’ve got to take everything serious… Every time we sparred I thought I was the better boxer but in the fight I just couldn’t get away from his jab. I was getting hit with everything.

“I have good timing but his timing was a lot better, he was beating me to the punch and that doesn’t really happen with me. But it happened in the fight.

“You’ve got to give respect to Jack and he did really well in the fight.”

Catterall will continue to work his way up the rankings. He boxes Cesar David Inalef on the March 6 bill headlined by Paul Butler at the Echo Arena in Liverpool. Stalker will fight on the same show against Michael Mooney.

“It’s an up and down sport but nothing went right for me on the night. I’m going to come back from it,” Thomas promised. “I’ve got a great team behind me, great people behind me. It’s just rebounding back now and getting back to the top. Derry Mathews has lost nine fights, he’s now fighting for a world title. That’s inspiration to never give up and always stick with it, that says it all really.”