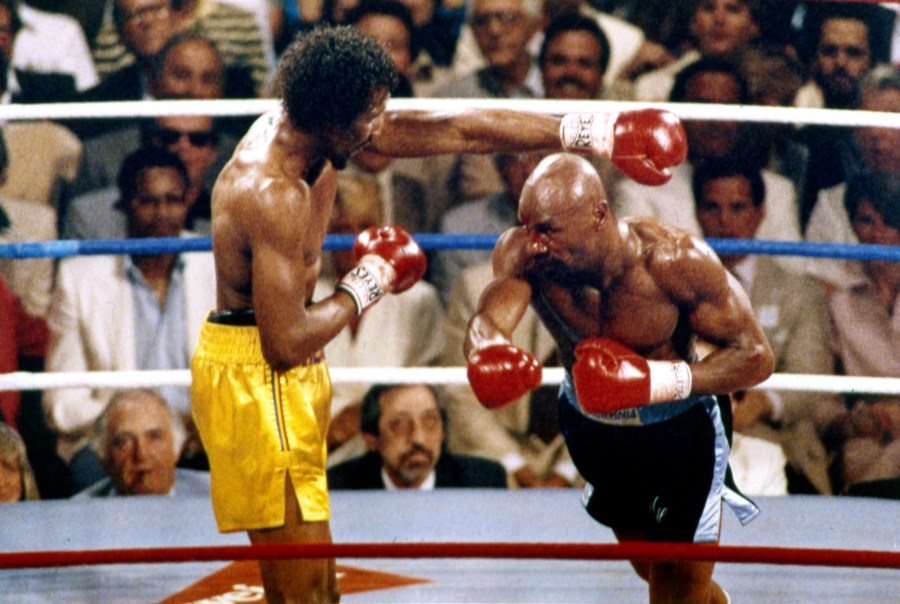 "I was so tired after the first round it didn't take much to knock me down after that," Thomas Hearns told James Slater

ORIGINALLY dubbed, quite simply, “The Fight,” the world middleweight title showdown between defending and undisputed champion Marvelous Marvin Hagler and former WBA welterweight champion and reigning WBC light-middleweight boss Thomas “The Hitman” Hearns was later given the tagline of “The War” by promoter Bob Arum. What unfolded that magical night inside Caesars Palace in Las Vegas was very definitely a fight and a war.

When looking back, Hearns, who always made it a priority to leave the paying fans feeling happy with the fight they had witnessed, was glad he was half of what is often called the greatest fight of all time:

“I’m definitely very proud to have been a part of that fight, for the part I played in it,” he said previously.

Hearns stunned Hagler with his vaunted right hand, temporarily forcing Marvin’s legs to dip, the champion having to hold until his head cleared. But with the power shot, Hearns had all but seen his most effective weapon taken out of the fight. His right hand was broken and this severely handicapped his chances of winning. Today, “The Hitman” feels the KO victory would have been his had his hand not buckled under the combined force of his own withering power and the granite in Hagler’s skull.

“Oh yes, most definitely. I knew I had to get it,” Hearns says of the stoppage win he is sure he’d have got had his hand not failed him.

“But I was so exhausted after hitting him all those times and throwing so many punches in the first couple of rounds – I hit him so hard in the first round. After that, I was so tired, it didn’t really take all that much [from Hagler] to put me down.”

Hearns, whose legs began to appear rubbery in the second-round, wasn’t the only man in the ring who was feeling the pace. Referee Richard Steele recalls, all these years later, how “spent” he was at the conclusion of this short yet incredible fight.

“I was shocked at the ferocity of that fight and the pace they set,” the retired ref said previously.

“I always made sure I stayed in shape, I did my running and everything, but after the second round, I was exhausted. I remember thinking to myself, ‘there’s no way these guys can keep up this pace.’ I was spent myself. It was just three rounds of toe-to-toe action.”

After the incomparable opening session, the fight raged on for a further five minutes, with the two men unleashing yet more vicious punches on one another in mesmerising fashion, before an exhausted Hearns finally fell. There was much drama crammed into the three unforgettable rounds. Somewhere during the furnace-like action of that opening round, Hagler had suffered a cut on his forehead. It wasn’t until the third and final round of the fight that the blood began pouring to the extent that referee Richard Steele felt the need to inspect the damage. It was at this point in the fight that Hagler worried how “they would try to take the fight from me.” Hagler never trusted the officials, robbed as he was sure he had been in previous bouts. A timeout was called by Steele as the ringside doctor checked Hagler over. It was here that Marvin is supposed to have uttered a few memorable words that have been quoted many times over the years.

Steele said Hagler did not, in response to being asked if he could see okay, say, ‘I ain’t missing him, am I!’

“No, he never said that,” Steele revealed. “He said to me there was no way he was going to lose the fight on a cut. I told him, ‘Hey, I have to get a medical opinion.’ I took him to the doctor and he let him fight on and Hagler came on to knock Hearns out.”

A dead-tired Hearns was badly staggered by a lunging Hagler right to the head, the blow sending him reeling to the ropes. The rampaging champion had not been fooled by Tommy’s attempts at feigning not being hurt. Hagler instead poured it on and found the finish he was looking for in that sizzling third round, his follow up work sending Hearns crashing to the mat. It was over and no-one who saw the fight would ever forget it.

It wasn’t until years later when Hearns’ legendary coach Emanuel Steward, having refused to try and tarnish Hagler’s victory in any way, spoke out about the broken hand his fighter had suffered as well as the tale of when a Hearns hanger-on made the mistake of giving the Kronk star a leg massage in the dressing room before the fight. This, Steward said, badly weakened Tommy’s legs (causing them to begin disobeying him in the second-round). Today, Hearns is reluctant to blame the leg issue for his loss.

“Well, things like that can happen in boxing,” Tommy says of the massage error.

“But Emanuel was still in my corner and we still believed we’d win the fight. But I knew I needed to do it quick. I knew I couldn’t go the distance; there was no way I could go 12-rounds. I couldn’t box that many rounds, I was so tired. So I went for the knockout.”

Hearns has nothing but respect for Hagler today. In fact, Tommy says there was no real bad blood in the lead up to the brutal eight minutes they were to share in the ring.

“No, there was no real disdain at all. We talked quite a bit [in the run up to the fight] and we had a lot of respect for each other. It was just a fight to see who the better man was, it was real simple: someone had to lose. I just didn’t want that [a loss] on my record!”