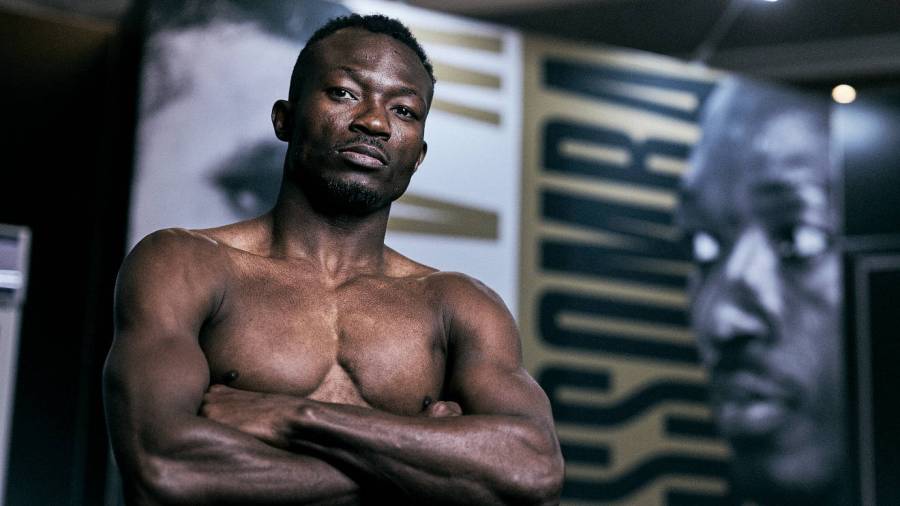 THOMAS ESSOMBA has been too used to losing. The Cameroonian hasn’t won a fight since 2019. But that, he insists, is going to change. He has moved to a new gym, joining Grant Smith in Sheffield and he is going into a winnable contest against Michael Nielsen in Denmark on Saturday (April 9).

“It’s been a hard time, it’s been a very hard time,” Essomba tells Boxing News. “I moved to Sheffield to get better training.

“I’m very fit. I’m very confident for the fight. Very, very confident,” he continued. “It will be no easy fight but I have to win. I’m 100 per cent sure that I’m going to win.”

Though he might not have won his last three contests, Essomba has been fighting the very best in Britain. He lost a 12-round decision to Sunny Edwards, who went on to become the IBF belt-holder. He drew with Thomas Patrick Ward in a creditable performance and lost a decision to Marc Leach, now the British champion, last year.

“When I fought Marc Leach, if I had the trainer I have right now, I should beat him very easily. Because I’m in really, really good shape now. I believe that that shape will help me to beat anyone,” Essomba said. “I think my fight was a bit harder than that fight [against Chris Bourke] to be honest. When I watched that fight it was so easy for him, I didn’t expect that. I know Marc Leach is good… You have to make him miss, if he misses I think he will be more easy for you to box.”

He is open to that rematch. “Of course, if you have an opportunity I will have it, I will take it. No problem for that,” he added.

It was a former opponent, Sunny Edwards, who has helped Essomba more than any other. He manages him and brought him to trainer Grant Smith. “[Sunny] was the first person I asked if it was possible to find me someone for training, I definitely wanted to move,” Thomas said. “He helped me a lot.

“The best way for me to be better was to move.”

Essomba has also been helping Edwards with sparring. “He’s a very talented boxer, very, very talented, and to train with someone like him, I think every single time I have sparring that gives me more motivation to do better,” he said.

Essomba’s journey through boxing has been trying. He started out at a simple gym in a small town in Cameroon. “Boxing is the only thing I know in my life. I started boxing when I was little and I didn’t have a chance to learn something else,” he said. “When I went in the boxing gym, I saw a guy who was little like me, he was training. Before that I was playing football. I was little but I was very good at football. So when I went to the gym for me in my mind I said it’s good for me to learn how to be strong.

“If someone hurts me I can defend myself. So when I started boxing it was just for me to learn how to defend myself so I remember after two weeks’ time the guy who took me there stopped coming to the gym. Me, I continued, because I definitely wanted to learn how to be strong. A couple of months later I started to be very interested, the coach started to like me and said boxing can change my life.”

“The place where I was born, a small town, the club didn’t have material like gloves, like a bag, they don’t have material stuff,” he added. “No punching bag, no gloves, no ring. It was difficult but you just deal with it. The first time I saw a ring was when I did the national competition. That was the first time I was in a ring. Every time I was sparring it was just on the floor.”

He was a successful amateur, boxing for Cameroon at two editions of the Olympic Games. After London 2012 he stayed in the UK. “I was scared to go back because the problems became very, very bad. It was why my Olympics in 2012, I didn’t enjoy it,” Essomba explained. “Our team, our federation said once someone loses in the competition they’re supposed to go back straightaway and that made us scared. It was a very, very hard decision to be honest.

“You leave all your family, all your friends. This country, when I first came I couldn’t say nothing in the language. It wasn’t my language. My first language is French. I didn’t know nothing in English so it was a very difficult decision when we took it.”

He based himself in Sunderland, assisted by people who helped him learn English and Phil Jeffries, one of his first managers. “It was very strange for me. Everything was strange, everything was difficult,” Essomba said. “I remember when I first moved there, I think it was in December, I remember I went to the town, I couldn’t see nobody. I started to cry… In Cameroon there’s parties everywhere, there’s music everywhere but when I went to town here in Sunderland, oh my goodness, nobody. I will never forget that day.

“The first year, second year was very, very hard for me.”

He’s moved to Sheffield for another new start. He believes he will reset his career. “I still believe I have big, big things coming,” Essomba says. “I believe that anyone who comes in front of me right now, I will beat him. Because that hope. From 2015, 2016, I lost hope. I started to lose hope because it was very difficult. Right now my hope is coming back. It’s coming back. Stay focused in training and I believe everything will be fine.”