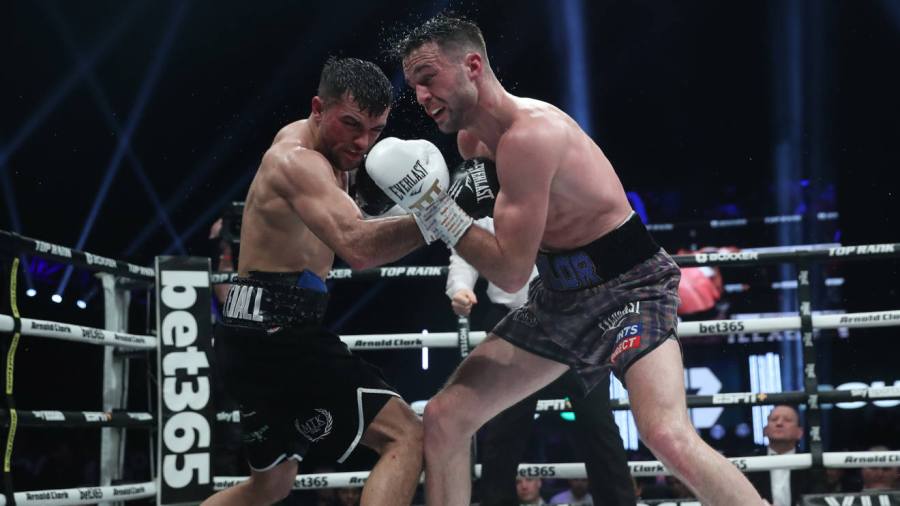 Josh Taylor has left the door open to a rematch against Jack Catterall, but Catterall is still to be convinced, writes Elliot Worsell

THE only thing worse than two of the three scorecards delivered after the 12 rounds shared by Josh Taylor and Jack Catterall in February was the terrifying prospect of the two of them never sharing a ring again.

A rematch, after all, appeared in the moment to be not only important but obvious. It was obvious before the scorecards had been read – the assumption being that Catterall was about to get the decision and Taylor, the dethroned champion, would seek immediate revenge – and it became all the more obvious, and indeed necessary, when two judges colluded to make a pig’s ear of the result and leave Catterall, the presumed victor, apoplectic in defeat.

At that point, with emotions running high, all anyone could think about was the two super-lightweights later reconnecting to right this perceived wrong. Such thoughts were not meant to denigrate Taylor, who remains a fantastic super-lightweight champion and all-round fighter, but what’s right is right and that night, having produced, for my money, the best performance in a British ring so far this year, Catterall deserved at least some acknowledgment of this.

In the end, though, he was left with nothing. In the end, so distraught was he by the decision, he exited the ring without even having the chance to express to the world the extent of his disappointment.

As for Taylor, a picture of relief, the aftermath of fight one was all about damage limitation. He claimed he had won the fight, the decision therefore correct, yet the feeling around ringside let him know this was not an opinion shared by anyone outside his team, and this, a backlash of sorts, caused the feisty Scotsman to double-down on his conviction. It led to him cutting a stubborn figure at the bout’s conclusion, unwilling to give his beaten opponent much in the way of credit.

Rather than a rematch, all the talk at that stage was of Taylor moving up in weight. He said, having beaten Catterall, there was no need to do it again, a statement successful in riling both Catterall and the many others irked on the Mancunian’s behalf.

They went their separate ways after that and then, for weeks, went back and forth on social media, slyly and sometimes not so slyly delivering digs, at which point the saga appeared destined to become one without any kind of satisfying resolution – for either of them.

Thankfully, though, four months on, Taylor, the one still in the driver’s seat, looks to have had a change of heart. Speaking to The National, he said, “The only reason I’m staying at junior-welterweight is I want to fight Jack Catterall again. I don’t think it was the wrong decision (in February) but I want to shut everyone up. I want to prove that was an off night for me and that I’m one of the best fighters on the planet.

“Because of all the stick and abuse I’ve been getting, and the way Jack’s been, too, mouthing off and moaning, I just want to shut his mouth.”

Quite the about-turn, this change of heart – and mind – could simply be attributed to the reaction to fight one and a desire, on the part of Taylor, to remove all the subsequent noise. Or, conversely, it could be because Taylor, 19-0 (13), has looked around and decided there aren’t any options more appealing – financially speaking – than running it back with Catterall in Britain later this year.

For the rematch, after all, is an entirely different proposition than the fight Taylor prepared for in February. Now, with so much backstory and needle between the pair, it has become in its own right something of a super fight, at least domestically. Whereas before, back in February, few were all that enamoured by the idea of Catterall, Taylor’s WBO mandatory challenger, getting his shot at gold, now they are positively foaming at the mouth to see him get his deserved second chance.

Moreover, from Taylor’s point of view, as well as the financial upside to this newfound and unlikely rivalry, there is every chance he will find himself motivated in a way he never was first time around, when, like everyone else, he was expecting to swat aside Jack Catterall with little difficulty.

Whatever the reason, a u-turn is the right move to make. Beat Catterall in a rematch – properly beat him this time – and Taylor will have turned a routine title defence, which is all it was in February, into one of the defining triumphs of his career. He will, as he said, shut up the noise and the criticism and, in doing so, restore his otherwise pristine reputation.

For that to happen, though, Catterall, 26-1 (13), first needs to be convinced Taylor is serious. Taking to social media in response to Taylor’s earlier comment about staying at 140 pounds, he wrote, “Tartan Tornarsehole (is) all bark (and) no bite. I’m still waiting for an offer… I’m ready to go. I don’t believe you really want it.”

And so it continues.