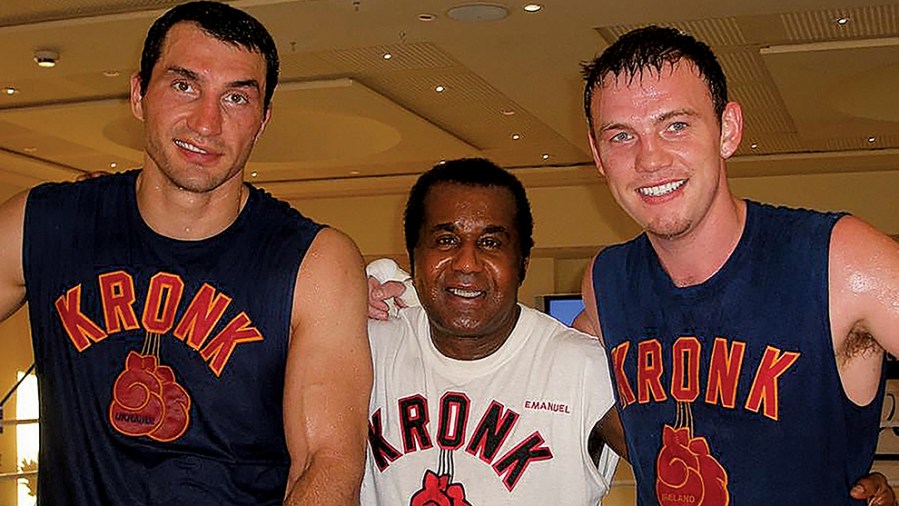 The great Emanuel Steward died 10 years ago this week, yet his presence and impact on the sport can still be felt, writes former WBO middleweight champion Andy Lee

Even though it’s a lifetime ago the 10 years since Emanuel Steward died have gone so quickly – I’m still saddened that he’s gone. All of the great memories lead to a range of emotions – I’m grateful to have had them, and I still get a lump in my throat.

I’m lucky to have spent so much time with him – and at the end of his life. I bring him up all the time, and I constantly think about him – I always revert to, “What would Emanuel do?” As a mentor, coach, cornerman and commentator I was guided by the perfect man. Even under Adam Booth, when I was changing my style and getting away from the Kronk’s, when I was in difficult spars I’d always fall back on what Emanuel would have instructed me to do.

Just to be around him was an education. It was boxing, 24 hours a day, seven days a week. I lived with him in his house – our bedrooms were on opposite sides of the hallway. SugarHill Steward was there; Johnathon Banks; Aaron Pryor Jnr; and everyone was calling him from all over the world. It could have been Don King or Bob Arum – these phone calls would always be happening, and he’d fill you in on what was going on in the ring, in the gym and also on the inside of the sport. If he were here now he’d be in touch with Wladimir Klitschko, and well on top of what’s going on there in Ukraine.

He was always programming his fighters. When he’d be talking to you directly or talking to the press within earshot of you, he was programming you and thinking. He said it himself – you have to be a psychologist as well as a physical trainer – you have to know the fighters. He liked to spend a lot of time with his away from the gym to get to know them, their families and their backgrounds; to see how they lived, and get a feel of the type of person they were.

Outside of my parents, Emanuel’s the biggest influence in my life. In a sense, myself, Johnathon and Tony Harrison have become synonymous with him; SugarHill even more so. We all learned and took different things from him, and I think he’d be proud of us. He’d be very proud of SugarHill and how he’s transformed Tyson Fury – he’d really wanted to train Tyson – which is similar to the way Emanuel changed Wladimir.

There used to be a photograph on the wall in the hallway at his house – it was him as a young man with three kids, aged eight or nine years old. Two of them grew up to be world champions, and one of them was an Olympic gold medallist. They were Tommy Hearns, and Stevie and Milton McCrory. Emanuel’s wife Marie and daughter Sylvia are doing a fantastic job in building a new Kronk legacy and supporting young kids in Detroit today. It’s a tough city, but the perfect breeding ground for fighters.

Emanuel could spot talent a mile away. I can remember him saying, when Dmitry Salita was still fighting, to SugarHill, “Stay close to Dmitry, he’s going to be a big player in boxing someday.” He could see how he was going to be – things he said all of those years ago are still coming true today. There was also a bit of mysticism about him – Samuel Peter used to call him “The Wizard Man”. He was born on 7/7; there were seven letters in his first name; seven letters in his second name. He was into numerology. There was a bit of magic about Emanuel; there was just something about him you couldn’t put your finger on.

He changed the course of my life, from being a very good amateur in County Limerick, Ireland – relative obscurity – to Detroit to train alongside “The Hitman” and all of these great fighters, and then travel the world with him and train besides Wladimir, Jermain Taylor, Chad Dawson, Miguel Cotto, Kermit Cintron, Cornelius “K9” Bundrage and more. I was living my dream, and it was because of Emanuel.

These great people come along once in a lifetime. He was a great character – a true class act – as comfortable talking to homeless people in the street as he was to the biggest lawyers, promoters and politicians. He was one of the most generous of people – with his time and money – I’ve ever met in my life, and his reputation, legacy and legend has grown.