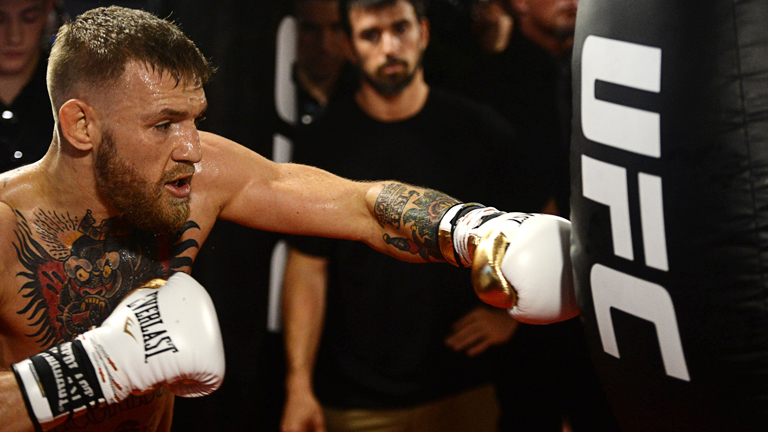 The McGregor-Malignaggi footage was not 'leaked'

The McGregor-Malignaggi sparring footage was not ‘leaked’

ACCORDING to an alarming number of people, 25 seconds of edited footage is enough evidence to prove Conor McGregor will beat – or, at the very least, trouble – Floyd Mayweather when they meet on August 26.

The Irishman’s notorious spar with former world champion Paulie Malignaggi made yet more headlines when UFC President Dana White uploaded two separate clips from it onto social media. The first shows McGregor landing punches on a visibly tired Malignaggi while the second is of the alleged ‘knockdown’, where Paulie hits the deck.

Conor and Paulie had two sparring sessions in total, one which lasted eight rounds and the other 12. The footage offered up is hardly enough to draw any concrete conclusions from, but countless fans and observers are now arguing McGregor’s perceived success against Malignaggi – who, let’s not forget, is working the fight for broadcaster Showtime – shows that he can in fact box. Malignaggi, 36, himself has admitted he was nowhere near fighting shape, given that he retired from the sport back in March – hardly an accurate barometer with which to measure against Mayweather.

Also, various outlets described the footage as ‘leaked’ – that is just completely false. The clips were put out by McGregor’s promoter as yet another tool to boost sales. They are neatly edited and ideal for sharing on social media – they caused a huge stir, and will have undoubtedly convinced more people to buy the fight on pay-per-view. They also seem to have shortened the betting odds, with Mayweather now available at a ludicrous 4/1 on.

Beyond that, they mean little – the clips have no bearing on the outcome of the fight.

TWO major undercards were announced – that of Mayweather-McGregor and Joseph Parker vs Hughie Fury.

The May-Mac supporting cast is a strong one and was well received by fans and media alike. Nathan Cleverly vs Badou Jack, Gervonta Davis vs Francisco Fonseca, Andrew Tabiti vs Steve Cunningham and Shawn Porter vs Thomas Dulorme are all intriguing fights and should go some way to pleasing the more hardcore fans who loathe the main event.

The Parker-Fury card was met with noticeably less excitement. Joe Murray and Matty Fagan meet in a crucial British lightweight eliminator while Josh Wale defends his British bantamweight title against Don Broadhurst. Both are decent domestic battles but the undercard lacks big names.

It goes to show that, no matter how big the main event, fans are still eager to see a solid card underneath it.

The card of the year will be shown in the UK

THE September 9 show in Carson, California which is stopped by Roman Gonzalez’ rematch with Srisaket Sor Rungvisai was picked up by Sky Sports, who will air it in the UK.

Gonzalez’ shock loss to Sor Rungvisai was one of the best fights of the year so far and their return is highly anticipated. Before he lost, ‘Chocolatito’ was considered the best fighter on the planet and he is eager to reclaim that mantle.

Estrada and Cuadras, who both lost compelling decisions to Gonzalez, are set for an electric fight of their own, which has plenty on the line. Then there is Inoue, the division leader who would make an ideal opponent for the Gonzalez-Sor Rungvisai winner.

Former world champion Brian Viloria also features on the bill, which is arguably the best of the year so far. For a while, it looked as though it wouldn’t be picked up by a UK broadcaster, so it was encouraging to see Sky scoop up the rights. Eddie Hearn had previously told us that the channel will feature more international shows, and this one is an excellent addition to their schedule.