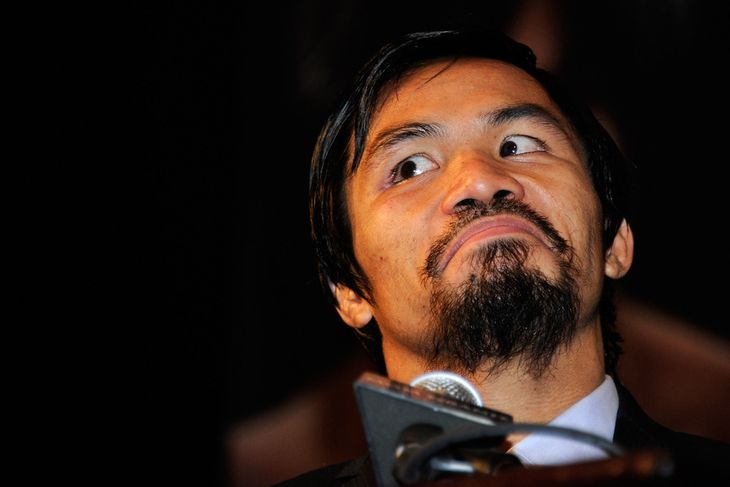 MANNY PACQUIAO has always lived life on the edge.

It’s a big part of who he is and what he’s accomplished. The same daredevil mentality that drives him inside the ring permeates every facet of his life, including the management of the fortune he’s earned with his fists.

According to Forbes magazine, if you include the estimated $30m from commercial endorsements, Pacquiao has made in excess of $300m. That is a staggering amount of money, but exactly how much of it is left is something even Manny might not know.

Although he certainly leads a lifestyle befitting a superstar and employs a huge staff, that’s only a part of a financial boondoggle (Google it) that is consuming money faster than Manny can make it.

Pacquiao’s generosity is legendary. People line up at his doorstep looking for a handout on a regular basis and are seldom turned away empty-handed. He has financed businesses for various members of his extended family, virtually all of which have failed to turn a profit.

In February Pacquiao attended a groundbreaking ceremony for a church he is building in General Santos City that will cost him around $6.7m.

Even more expensive will be his campaign for a Senate seat in 2016. Pacquiao was elected to the House of Representatives in 2010 and re-elected in 2013. It was estimated that his campaigns cost roughly $6m in 2010, and slightly less in 2013 because he was the incumbent. He also finances the campaigns of friends and family running for lesser offices on the same ticket.

“Running for Congress will cost Manny a lot more than running for a seat in the House of Representative, at least $10m” said Ted Lerner, an American journalist who has lived in the Philippines for 20 years. “If anything ruins Manny financially it will be politics.”

Then there is a draconian tax situation currently in Appeals Court that alleges Pacquiao owes 3.2bn Philippines pesos in back taxes, penalties and surcharges. That’s approximately $724.5m, an unfathomable sum that is more than twice the amount he’s earned.

One can’t automatically assume the massive purse from the Mayweather fight will solve Pacquiao’s financial difficulties. Manny’s promoter, Bob Arum (who has been know to exaggerate from time to time) recently said he believes there’ll be around $300m in the pot, and that Pacquiao’s 40 per cent would be about $120m. How much Manny actually takes home is anybody’s guess, but even if it is every dollar, which is virtually impossible, it would only put a dent in his tax bill if his appeal is rejected.

Desperation can be a powerful motivator, and that includes monetary desperation. It was poverty that launched Pacquiao into the world beyond the nipa hut of his boyhood and an enthusiastic disregard for his physical safety that carried him to the top of his profession.

Meanwhile, despite the threat of financial ruin and the Floyd Mayweather fight rapidly approaching, Manny is rumored to be hunting for a new Beverly Hills mansion in between workouts at the Wild Card gym.

With little regard for yesterday or tomorrow, Pacquiao is still living way out on the edge – just where he’s always been and exactly where he needs to be to beat Mayweather.

THE REAL PACQUIAO by Nonito Donaire