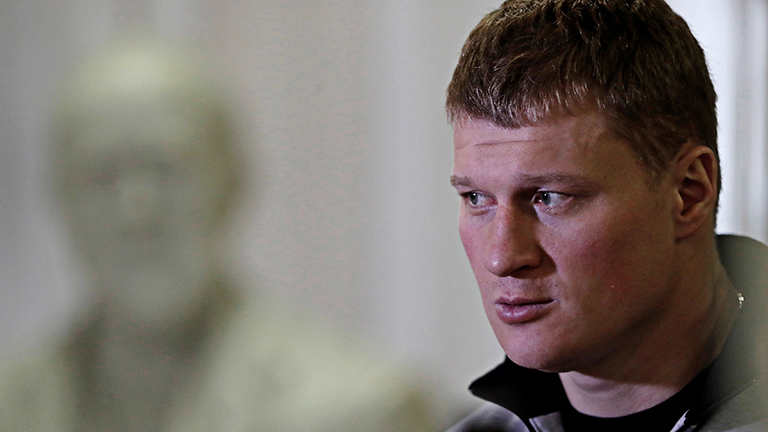 Joe McNally, the coach, never encouraged his boxer, David Price, to swerve Saturday’s (March 31) bout against Alexander Povetkin, a Russian who has twice failed drug tests, but struggled with it, morally, when it was signed two months ago. Now, having realised there has been no drug testing at all during their respective training camps, he is sick to the stomach.

“There’s been no testing involved in this whatsoever,” McNally revealed to Boxing News this afternoon (March 29). “David certainly hasn’t been tested. He could have been eating f*****g tons of Canelo Alvarez’s Mexican meat if he wanted to.

“Povetkin hasn’t been tested – not once. I actually called UKAD (UK Anti-Doping) this morning (Thursday, March 29) and they couldn’t state to me whether they’d tested him or not. What they did tell me is his team signed up through the British Boxing Board of Control to be tested. But to me that means f**k all. If I had it my way he would have been VADA (Voluntary Anti-Doping Association) tested a long time ago.”

David Price, of course, is well accustomed to fighting drug cheats. He fought Tony Thompson in 2013, and then fought another, Erkan Teper, in 2015. Both times he was stopped. Both times he discovered the extent of their dastardly ways only after he licked his wounds and attempted to rebuild a broken career.

But this situation is different. This time Price is armed with knowledge gleaned from past experiences, yet has still decided to accept the Povetkin fight because it represents an opportunity, a well-paid one at that, and could lead to even greater ones in the future.

Which is why when McNally says the fight shouldn’t be happening, his comments need to be prefaced by the following: in an ideal world. In McNally’s version of boxing, one in which drug cheats are suitably punished, he’s correct, a fight like Povetkin vs. Price shouldn’t and wouldn’t be happening. But here, in the real world, he and his fighter, if they want to make it in a rigged game, are resigned to their fate.

“I haven’t been tested once,” Price confirmed on Thursday. “I’m not going to complain about it, though, because last time I did I got persecuted (following a 2011 interview in which he said he’d been a pro boxer nearly three years and never had a random test, the testers did all they could to interrupt his routine – relentlessly test him – for the next six months). I shouldn’t have said anything.

“Joe phoned UKAD this morning and asked them if Povetkin had been tested and they said they couldn’t disclose that information. But it’s not even in my mind at this point. The fight is on regardless, isn’t it? I might be gullible but I don’t believe he’d do it again. I’d like to think he has learnt his lesson and won’t take the risk. He has too much to lose.”

Gilberto Mendoza, the president of the World Boxing Association (WBA), the sanctioning body with whom Povetkin is rated number one at heavyweight, has ranked his fair share of reformed drug cheats over the years. But it’s hardly his fault. The drug-taking, that is. Come down hard on the heavyweights and he’d stand to lose six of his current top fifteen. He’d also lose Saturday’s WBA intercontinental heavyweight title fight.

“Secondly, there are a lot of positives in the game. One of them is Povetkin [who failed tests for ostarine and meldonium in 2016]. He has since volunteered for testing and has been negative.

“But it is difficult to have a unified policy on this matter. Local jurisdictions and sanctioning bodies, they all seem to do things in a different way. For example, we banned Luis Ortiz, because it was his second time failing a test, and the fight with Deontay Wilder still went ahead for the WBC title. Our punishment was disregarded by the other sanctioning bodies when it should have been backed up.”

The WBC accepted Ortiz; the WBA accepted Povetkin. Two wrongs and all that. Still, Mendoza is of the belief that the Russian, his sanctioning body’s former champion, is now a reformed man who has been bombarded with random testing for the best part of two years and is, like a good boy, keeping his head down. Which is to say, Team Price, and anyone who asks if Povetkin has been tested in the last eight weeks, should keep theirs down, too.

“Povetkin is in the voluntary testing pool with VADA,” said Mendoza. “He has been tested [before the Price fight]. In the last two years he has been regularly tested.”

Tired of interviews, keen to return to his hotel room (better still, Russia), the only time Alexander Povetkin looked at me, five questions in, was when the subject of performance-enhancing drugs was brought up. Asked if he had been tested ahead of his fight against Price, the question was translated into Russian and his answer was then repeated back to me in English, at which point our eyes briefly met.

“The doping test was an issue in this fight,” Povetkin said. “It should be done by the British Board of Control and we did the test here yesterday, and we will do another one after the fight. We don’t know what David Price is doing but we did one yesterday.”

Worried I might have misheard, or something might have been lost in translation (did testers – presumably UKAD – really wait for him to arrive?), I looked for confirmation he was tested on Wednesday.

“I’m enrolled in the ‘Clean Boxing Program’ but, no, I wasn’t tested by VADA for this fight.”

Granted, VADA can’t test every champion and contender about to engage in a professional boxing match. It costs too much, both financially and in terms of manpower, for this to ever be a realistic possibility. It’s admirable, too, that Povetkin is enrolled in VADA’s ‘Clean Boxing Program’ and wears the distinction as if it’s a 20-metre swimming badge. But is it not somewhat remiss of VADA to waive testing either boxer in a bout that involves one who has twice tested dirty for performance-enhancing drugs and another who has twice suffered devastating knockout defeats to men on performance-enhancing drugs?

Oversights happen; human error can be forgiven. But this is turning the house upside down to look for your glasses when they were resting there on your head all along. This is missing the signs, if not looking the other way entirely.

“Money talks,” said McNally. “You’ve only got to look at that Netflix documentary, Icarus, to open your eyes to it all. It’s rife in sport, especially in Russia. It’s a joke. That documentary sums up Alexander Povetkin in a nutshell. You’re being naïve if you don’t see it. PED use in the sport is rampant.”

Let’s get another thing straight: fight week tests won’t suffice. In fact, the only thing more pointless than a test on a Wednesday is a test on a Saturday night, half an hour after a fight. It’s been and gone by then – whatever it happened to be – and testers, those do-gooders ticking boxes, scribbling on plastic tubes and playing dress-up, are late to the party.

What’s more, a knowledge and awareness of testing inadequacy only serves to empower those who look to gain an unfair advantage. Give them an inch and they’ll take a mile. Catch them taking a mile but do nothing about it and you’re essentially punishing a disobedient child with a McDonald’s Happy Meal (and letting them keep the toy).

“Let’s not beat around the bush,” said McNally, “Povetkin is a cheat. He’s been caught not once but twice. He should be banned for life. He shouldn’t be sitting up there on that stage. End of story.

“If I was on that top table I would have said the same thing. He shouldn’t be here. He’s a cheat. It’s prizefighting and people’s lives are at risk when you step through those ropes. There’s no place for cheats in this sport.”

Oh, but there is. On the top table; on the poster; in the ring; on television; in the world rankings; in the history books. They’re everywhere. David Price knows this as well as any current boxer. But with zero protection from them, and with absolutely no power or say in the situation, what is David Price, or indeed any other prizefighter desperate to make a living, supposed to do?

Fight. That’s what. Fight even when they, and those around them, know they shouldn’t really be fighting.