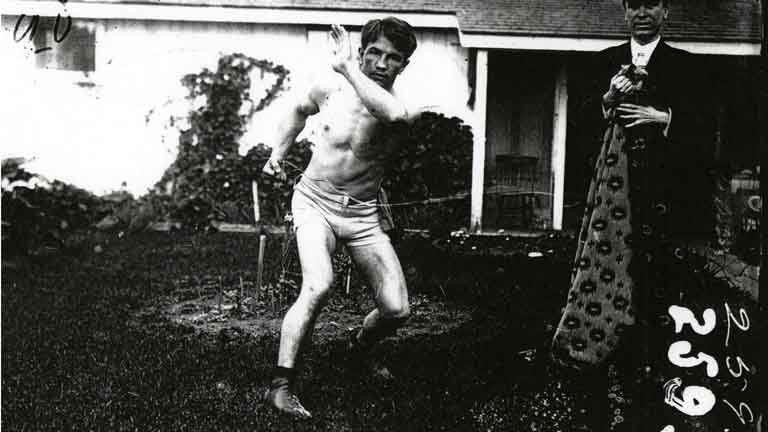 The incredible story of Ad Wolgast as told by Carlos Acevedo

LIKE another thunderous product from Cadillac, Michigan, the famous Shay locomotive, Ad Wolgast tore through the lightweight division for a few tumultuous years before derailing spectacularly in the kind of tragic circumstances all too common in prizefighting. If the appeal of boxing rests on its peculiar ability to dramatise – albeit on a small and unholy scale – certain bleak cultural touchstones – social Darwinism and the Nietzschean will to power, for example – then Wolgast can only be Exhibit #1. In his furious life, both in the ring and out, Wolgast resembled nothing if not a character from a Frank Norris or Stephen Crane novel, naturalism personified. Best remembered for his apocalyptic free-for-all against Battling Nelson in 1910, Wolgast also beat several world-class pros from 1908 to 1912, when prizefighting was in its brutal heyday, and before his peak was cut short by the hard logic of the ring.

At 16, Wolgast, son of a struggling farmer, left home to eke out a bootstrap subsistence throughout Michigan. He sold newspapers, shined shoes, and took on one odd job after another before finally settling on fisticuffs as a vocation. In 1907, after compiling a winning record across Grand Rapids and Petoskey, Wolgast moved to Milwaukee, Wisconsin, where he built a bloody reputation as a relentless brawler with a crippling left hook and a ferocious body attack. Two years later, Wolgast settled in California, the centre of the boxing universe after professional fighting had been banned in New York City in 1901.

In Los Angeles, Wolgast raised his profile to a national level with solid showings in a pair of no-decision bouts against Abe Attell and reigning lightweight champion Battling Nelson. If not for the swaggering shadow of Jack Johnson, who dominated headlines from coast to coast, Oscar “Battling” Nelson would have been the most famous fighter of his era. Nelson, who underestimated Wolgast before their first fight in July 1909, sneered at the cocky upstart every chance he got. Finally, seven months after their first encounter, Nelson agreed to meet Wolgast again, this time with the title on the line.

To skirt laws against “fights to the finish,” promoter Sid Hester scheduled Nelson-Wolgast for a preposterous 45-round limit, knowing full well that the final bell would never ring. What Hester did not know, however, was that Nelson and Wolgast would fight so savagely and for so long. On February 22, 1910, Battling Nelson and Ad Wolgast took what Theodore Roosevelt called “the strenuous life” to grisly extremes in Port Richmond, California. When they met at ring centre for final instructions from referee Eddie Smith, Nelson more than justified the nickname – “The Abysmal Brute” – Jack London had given him. “Let everything go,” he snarled. “No fouls.” Never one to shy away from a brouhaha, Wolgast enthusiastically agreed and the stage was set for one of the most famous bloodlettings in boxing history. Both men tore at each other from the opening bell, with Wolgast, six years younger, getting the early edge. After a few rounds under the raw sun, Nelson, already bleeding from his nose and his mouth, sported purplish lunettes above each cheek. As the fight progressed, his eyes swelled shut completely, and Nelson found himself tottering on the verge of defeat. Still, Nelson would not yield. In the 22nd round, Nelson dropped Wolgast with a right cross, but Wolgast was as tough as an arrowhead, and he resumed battering the champion from one end of the ring to the other. Finally, in the 40th round, Nelson, nearly blind and splattered with his own gore, could only paw feebly at the air. Smith finally intervened, hours after the combatants had first touched gloves and long after the squeamish crowd had called for pity.

“Why say anything else?” Wolgast asked after his struggle against Nelson. “Just say I am the strongest man ever to put on gloves.” Indeed, Wolgast was strong enough to defend his title at a pace that far outstripped his predecessor. Among the notable fighters Wolgast faced during his title reign were Frankie Burns, Joe Mandot and Owen Moran. His melee against “Mexican” Joe Rivers on July 4, 1912 was such a spectacular disaster that it gave Wolgast a succès de scandale to go along with his already legendary title-winning effort against Nelson. Against Rivers, a Los Angeles native, Wolgast reveled in the ferocity of hand-to-hand combat, what reporter Lester Bromberg once called his “magnificent obsession.” Bruised and bloody, Wolgast was trailing on points when he cornered Rivers against the ropes in the 13th round. There, the two fighters unleashed simultaneous punches – Rivers a slashing right to the jaw and Wolgast an arcing left hook below the belt – that sent both men crashing for a double knockdown. With Wolgast on top of Rivers, referee Jack Welsh began tolling the count, and at some point before reaching “10”, he helped Wolgast to his feet. An outraged crowd, soon primed to rush the ring, watched as Rivers was counted out for a knockout loss.

To Wolgast, his close call against Rivers was just another example of his iron will. “Double knockout, hell,” he said after the fight. “I was just too strong for him. Put it in the paper, none of them can take a beating like Wolgast.” But less than six months later, Wolgast was an ex-champion already making his shaky way to a bleak and black future that lay ahead of him. On November 28, 1912, Wolgast took a terrible beating at the hands of Willie Mitchell in Daly City, California, before fouling out in the 16th round.

Although Wolgast was still only in his mid-20s, the ultraviolence he demanded between the ropes was beginning to affect him. In those days, boxing was far less charitable than it is now. Referees were less merciful, gloves were smaller, and rounds went far beyond reasonable limits. Little by little Wolgast was disintegrating – both personally and professionally. His brittleness, at odds with a ring style rooted in brutishness, was a dark premonition of his ultimate fate. Over the course of his unruly career, Wolgast had been stricken by appendicitis, ptomaine poisoning and pneumonia. He broke his wrist, broke his thumb, suffered fractured ribs as well. Although he was still a box-office attraction – due to his dead-game attitude – the losses began to mount. More than once he broke an arm during a fight. Between 1913 and 1916, Wolgast struggled against one opponent after another.

By 1917, Wolgast was in a Milwaukee psychiatric hospital for what was euphemistically called a ‘nervous breakdown.’ In truth, Wolgast was already suffering from dementia pugilistica. In and out of institutions for over a year, Wolgast was eventually released from a California hospital in 1918. To the dismay of the press, Wolgast resumed fighting in the Southwest and California, where he took more punishment from an assortment of second-raters. Eventually, Wolgast would need medical care, but the kind of treatment he received would wind up in a ‘stranger than fiction’ file.

After World War I, when the blood-drenched trenches of Verdun, Passchendaele and Warlencourt familiarised the globe with both shell shock and mass mechanised slaughter, America, naturally, turned to whoopee in response. Indeed, even with Prohibition looming over the country, the nascent Jazz Age introduced the foxtrot and hedonism as national pastimes. And all that adolescent vigour produced an unusual cultural byproduct: the new cottage industry of rejuvenation as peddled by numberless quacks. Old medicine show standbys such as swamp root, snake oil and sarsaparilla were joined by miracles such as Worm Candy, Pepsin and Vim-O-Gen. While the American Medical Association was still in the midst of professionalising healthcare through state licensing boards and a public crackdown on charlatans, rogue doctors, often with degrees purchased from diploma mills, continued hawking magic powders and elixirs anywhere from gleaming office suites to the backs of covered wagons.

Then, like something out of The Island of Dr. Moreau, animal transplants via tissue grafts suddenly became part of rejuvenation mania. Already something of a story in Europe, where Dr. Serge Voronoff had been experimenting with monkeys, the bizarre act of surgically inserting animal glands into scrotums promised to reverse ageing and give men new life in the bedroom.

In America, the most famous fraud of all was Dr. John Brinkley, who wisely swapped monkeys – exotic animals to most – with goats, a common presence on farms across the country. Brinkley, a dedicated con man who began his bunco career in a travelling show before becoming an ‘electric medic’, triggered an entire sub-industry of goat gland peddlers at the dawn of the Flapper era. Seemingly overnight, rejuvenation clinics opened in one city after another.

Wolgast, only 32 in 1920, was now a physical wreck and as desperate as any septuagenarian hoping to recapture his libido. So he did what so many easy marks had done since the rejuvenation fad began a few years earlier: he went to see “The Goat Man”. In June 1920, Wolgast underwent surgery in a Los Angles clinic. His ‘doctor’, P. Livingstone Barnes, pronounced the operation a success. “Wolgast has been completely restored to health,” he said. “He is normal now and his muscles are in excellent condition… His memory, once shattered so that he could not remember names, dates, places or conversations, is again normal and I see no reason why Wolgast cannot come back.”

Even for such a permissive age, the fact that Wolgast was allowed to fight again after having been institutionalised was astonishing. But Wolgast insisted his comeback would be different. After all, he had modern science in his corner. “I am no longer an old young man,” Wolgast announced, “I have the physique and qualities of one in his early twenties.”

On September 6, 1920, only a few months after his operation, Wolgast took part in his last fight, a desultory draw against Lee Morrissey in San Bernardino, California. “The crowd booed the one-time champion, and he left the ring almost in tears,” reported The San Diego Evening Tribune. “He refused to comment at the end of the bout whether he still favours goat glands.”

Wolgast, whose record stands at 60-13-17, with dozens of no-decision bouts, never fought again. Now a shambling mess, he was taken in by Jack Doyle, a friendly promoter who allowed Wolgast to live on his compound and train, in his own delusional way, in his gym. A few years later, however, Wolgast was so far gone that Doyle had him committed to Patton State Hospital in San Bernardino. From 1927 to his death nearly 30 years later, Wolgast was confined in a succession of institutions and was largely forgotten.

Almost fittingly, violence brought Wolgast back into the headlines in 1949, when two sadistic employees of Stockton State Hospital assaulted the “Michigan Wildcat”. It was like something out of a Hollywood noir – Wolgast, enfeebled, scrawny, and now in his sixties, abused by sinister orderlies. The beating Wolgast took left him hospitalised, then bedridden for the remaining years of his life. No longer would he shadowbox in the hospital corridors, where he had continued ‘training’ in a haze for a phantom bout with his greatest nemesis – Battling Nelson. When he finally died, on April 14, 1955, it must have been a mercy, one of the few a man as proud as Wolgast was likely to accept. Oh, yes, it must have been a mercy.

Carlos Acevedo is the editor of Hannibal Boxing and was the founder of The Cruelest Sport. His work has appeared in Inside HBO Boxing, Undisputed Champion Network, Remezcla, and Boxing Digest Magazine. His stories A Darkness Made to Order and A Ghost Orbiting Forever both won first place awards from the Boxing Writers Association of America. He is a member of the BWAA and the International Boxing Research Organization. He has been writing for Boxing News since 2015.