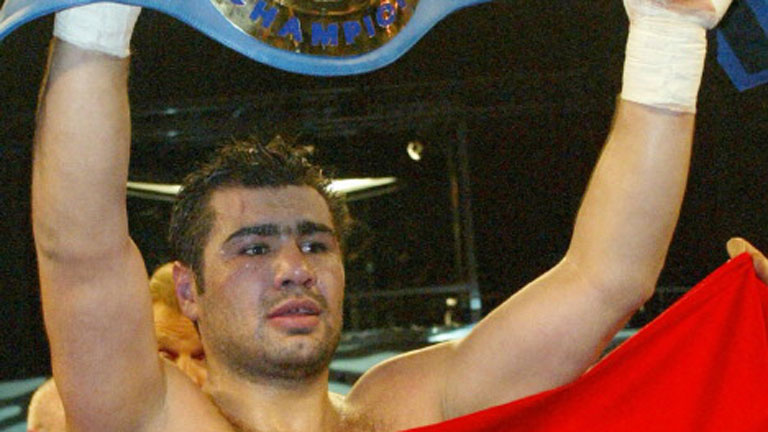 THE passing of former European heavyweight champion Sinan Samil Sam on October 30 2015 was not unexpected – rumours had been circulating for a number of days, particularly in the German and the Turkish media, that his health had deteriorated to such an extent that his death was imminent – but it was shocking nonetheless.

At the age of 41, his body ravaged by years of alcohol abuse and in desperate need of a replacement liver, Sam lost his final fight in an Istanbul hospital bed, surrounded by his family. Pictures posted on the internet revealed a grossly overweight figure, hardly recognisable from the fighter of a decade before. It was a tragic end for a man who, while never reaching the pinnacle of the sport, enjoyed a respectable career.

Ahmet Oener, later to become known as a promoter but at that point still an active boxer, engineered Sam’s switch to the professional code with Hamburg’s Universum Box-Promotion in 1999.

“The way he was brought to Universum was pretty much how Ahmet Oener got into management,” Malte Mueller-Michaelis, the former managing director of Oener’s promotional company, Arena Box-Promotion, told Boxing News. “He’d seen that a Turkish fighter had become the amateur world champion, and as there’s a large Turkish community in Germany, wouldn’t that be an opportunity? So Ahmet endevoured to get Sinan under contact.”

Sam arrived in Hamburg as a competent practitioner, but his ability alone wasn’t sufficient to propel him to the forefront of the German boxing scene.

“The conditions at Universum at that time were good, but Sinan wasn’t an easy case in terms of integration,” explained Mueller-Michaelis. “It’s important to speak German, and to give interviews. He wasn’t the showman, and unlike the Klitschkos, he really didn’t grasp how important his appearance was outside of the ring. He wanted to impress with his performances inside the ring, but that by itself isn’t enough for the German market. It’s enough to become an absolute sports star in Turkey, but not in Germany.”

Despite his lack of media friendliness, Universum were still able to steer Sam to the European heavyweight title. In October 2002, in his 16th bout, Sam relieved Poland’s Przemyslaw Saleta of the belt to set up an encounter with Britain’s Danny Williams.

Williams entered the ring in Berlin fully expecting to overwhelm Sam, but he was in for a rude awakening. His man down twice in the fourth round, and again in the fifth, Williams’ trainer Jim McDonnell was compelled to throw the towel in during the sixth as his thoroughly beaten charge was mercilessly knocked around the ring.

“I found him to be immensely strong,” reflected Williams. “Having seen him fight I didn’t think much of him. I thought I was going to jab this guy’s head off, I thought, ‘I’m going to beat this fat, overweight Turkish guy’, but then in the ring with me I felt his immense strength. He was a very, very strong fighter.

“It devastated me. Totally, it destroyed me. I remember, a few days after the fight I booked a ticket to go to America, on my own. I went there to spar in Gleason’s Gym. It really shook me up, that loss. It hurt me badly.”

Two months later Sam followed up with a seventh-round stoppage of another Brit, Julius Francis, but then things started to unravel. Consecutive losses, firstly over 10 to Juan Carlos Gomez the following September in the US and then, in February 2004, a disputed majority decision against Luan Krasniqi in a European title defence, signalled the end of his first stint at Universum.

A move to Sauerland Event offered Sam new perspectives, but by this time disillusionment with the politics of the sport had begun to set in. “You hear from your manager, who’s also your confidant, that you’ve been cheated and obviously you start to feel that they don’t want you at the top in Germany, and that is a source of frustration,” said Mueller-Michaelis of the Krasniqi fight. “On top of that came the loss against Gomez in the USA, and then a new start at Sauerland. He was never really happy.”

His tenure at Sauerland lasted less than two years. After beating an assortment of hand-picked opponents, Sam met Oleg Maskaev in a WBC final eliminator. Maskaev won widely on the scorecards and went on to become a world champion in his next fight by beating Hasim Rahman.
Sam returned briefly to Universum before joining Ahmet Oener’s fledgling outfit, Arena Box-Promotion in 2006. It was a small stable, and Sam was the biggest star.

“In many respects, when Ahmet founded Arena, he did it around Sinan,” explained Mueller-Michaelis. “Sinan was the first main event fighter. At that time he was a former European champion, and the basic idea was to bring him in and try to get him to the point where he could fight for a world championship. Sinan wasn’t in the best shape at that time, to be honest. But he was a very experienced heavyweight, and well placed in the rankings. Ahmet’s aim was to lead Sinan to a world championship.”

His recruitment also provided Oener with an avenue into the relatively unexplored Turkish market. In only his second fight for Arena, Sam was matched against Oliver McCall in Ankara in a WBC title eliminator.

“There weren’t any professional boxers in Turkey before Sinan, and we went there with the first professional boxing promotion in June, 2007,” said Mueller-Michaelis. “It was unique. At that time there was only Sinan, and after becoming the amateur World champion he had a very high profile in Turkey. We picked up on that when we were in Ankara. It was unbelievable how people reacted to him in the street.”

Despite the euphoria in his homeland, all was not well. Sam felt that he was being exploited, and his antagonism towards his promoter was palpable. In the end, he lost a unanimous decision against McCall.

“It was a fight which he should have won, but Sinan didn’t deliver what he needed to,” continued Mueller-Michaelis. “I don’t know if he was psychologically strong enough at that point to reach the very top. Ahmet gave him a chance with the world championship eliminator. You could sense the tension between them, particularly around the fight in Turkey where there were arguments about the purse.

“Ahmet knew that he wasn’t an easy character, but he always ensured that Sinan earned good money [when he was his manager]. When he became a promoter, he needed to earn the purses, and that’s when they fell out.”

He fought on, and even recaptured the European title against Paolo Vidoz, but his best days were behind him. Disillusionment and frustration played an ever-more significant role, and his reliance on alcohol became obvious to many of those around him.

“Fighters did mention that you could smell the alcohol on him during training,” said Mueller-Michaelis. “It was clear that Sinan wasn’t in optimal condition – he didn’t look like a well-trained heavyweight boxer.

“The physical deterioration was noticable, and I think that setbacks and the hand of fate would have contributed to the situation not getting any better. When you watch the last fight against Paulo Vidoz, even before the weigh-in Vidoz couldn’t really run, and neither could Sinan. The fact that the fight was for the European championship is shameful as neither boxer was in the kind of condition where you could describe him as a professional athlete.”

He was, you might argue, too reclusive to be a star. “Sinan had lived in Germany for a long time,” said Mueller-Michaelis. “He didn’t want to speak much. I think he could understand everything, but he avoided speaking. Since getting to know him, I never had a particularly close relationship to him because he wasn’t the kind of person who had a warm approach. He had a subtle sense of humour, but he remained distant. Maybe he was just a bit disillusioned by the world of professional boxing, and for that reason didn’t let anybody get very close to him.

“We mustn’t forget that Sinan was an amateur World champion. He had the disposition and the schooling to go a long way, and he won the European championship and had a very close fight with Luan Krasniqi. He belonged to the pinnacle of the European scene, and I think that while he was still with Universum, when Arena was founded, he was a bit frustrated and a bit disillusioned. The way professional boxing works, and the changing of promoters, leads to an athlete losing faith.

“Sinan was the entry to the business. Arena came from nothing, and Sinan was a former European heavyweight champion and somebody who came close to getting a world title shot. Ahmet played his cards well. After Sinan lost to McCall, Ahmet matched McCall against [Juan Carlos] Gomez, who had also joined Arena by then. Gomez went on to fight Vitali Klitschko for the heavyweight title.”

Others were granted the opportunities that Sam had craved. As well as Gomez and Maskaev, Krasniqi and Williams also went on to challenge for world titles.

For Sam, a career that had promised so much came to an unsatisfactory end, and he drifted away into anonymity back in Turkey. His name reappeared, briefly, in 2010 when it was reported in the German media that he was likely to die if he didn’t receive a replacement liver. Sadly, his recovery was only temporary.