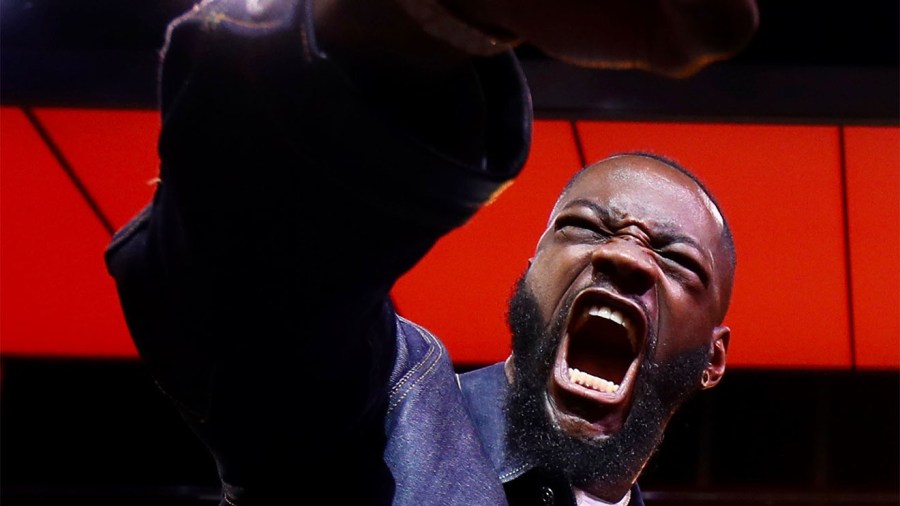 Back in 2013, Deontay Wilder was in London for sparring and took the time to show Elliot Worsell how he generates his mind-boggling power

IN 2013, Deontay Wilder told me he was all muscle, bone and skin. He then showed me the tip of his whip.

Nowhere near as sinister as it sounds, certainly less sexual, and entirely unrelated to cars, the whip in question was the technique behind a punch responsible for a 100 per cent knockout ratio and the tip, according to its owner, was the part of that punch that set it apart from those of others.

“Get back,” Wilder said, snapping into an orthodox stance beside a heavy bag, as if about to set off a firework. “Watch.”

Doing as I was told, what then followed was the revving up of a right arm, locked and loaded, and the letting go of a punch – a cross to most, an arrow released from a bow when belonging to Wilder.

Almost comical in its execution, Wilder made all the requisite noises before a right hand left its mark on a bag, the single object in the gym capable of standing up to it. “Back home we talk about my punches as being like a whip,” the heavyweight from Alabama, then 27, said. “And the most painful part of the whip is the tip. That’s where I do my damage – right at the end of my punches. The tip of the whip.”

Frank Joseph, a boxing agent, had earlier held pads for Wilder and now rued a sudden inability to hold steady a cup of coffee. As he waited for two trembling hands to return to normal, he rapped an endorsement over the repetitive beat of Wilder abusing the heavy bag. “You can tell how hard he hits just by looking at my f***ing hands,” Joseph moaned, offering left and right as evidence. “Whenever you hold pads for anyone with a dig, you’ll feel it afterwards. But I’ve never had the full-on shakes like this before. His power is frightening.”

I glanced down to find specks of coffee on the gym floor, poetically intermingling with the sweat falling from Wilder’s forehead. “My power is totally natural,” Wilder stopped hitting the bag to say. “I really don’t try to knock guys out. I’ve just always been able to punch hard and have always been strong. Even back when I was a 185-pound footballer, I’d lift as much as the biggest guys on the team. There I was, this little, skinny guy, doing everything the bigger guys were doing. Nobody could believe it.”

That day, and for much of that month, Wilder, brought over to spar David Haye ahead of his ill-fated fight with Tyson Fury, was going to do as he pleased. He hit things. He swaggered about the place. He preached. He yelled. He illuminated otherwise drab rooms with sound and colour. But best of all his punch power, once boxing’s Loch Ness monster, now, thanks to 29 consecutive knockouts, boasted newfound authenticity, which was likely what enabled him to showcase his wares in a London gym without any fear of being pulled him up for shoddy technique, beating up soft opposition, or simply making so much damn noise – “BOMB SQUAD!” – wherever he went.

Two years earlier, in fact, when Wilder first arrived in London to spar Haye ahead of the Englishman’s fight against Wladimir Klitschko, the six-foot-eight puncher would never have imagined holding court in the gym and teaching and preaching and going on about the tips of whips and dancing between rounds of sparring as though he happened to be at a family cookout with Cameo’s ‘Candy’ on the playlist. No, that Wilder, then 25, was a different proposition altogether. Raw and unsure of himself, he was full of basketball player athleticism but still in the process of figuring how to transfer it from hardwood to canvas. He was erratic. He was excitable. He was reckless. He kept Haye on his toes without treading on them or lifting him off them.

Outside the ring, he was congenial and well mannered. He was grateful for the opportunity. He was relatively unknown, approached only because of his size and amateur achievements (an Olympic bronze medal in 2008 was no mean feat), and behaved accordingly, travelling with no airs and graces, and acquiescing to Haye’s demands, at least in terms of social niceties, respectful of the fact it was his gym and city. He was a delight.

But in two years something had changed. By 2013 Wilder was different. Still a delight, the difference now was that you heard him before you saw him. There was a “BOMB SQUAD!” on every corner – a brave and dangerous mantra in this day and age – and Wilder arrived not as a sparring partner but as someone intent on showing how much he had improved and, in turn, showing everyone why he would soon become America’s next world heavyweight champion.

To this end, when he sparred, which Wilder did regularly that summer, he sparred like no heavyweight I had seen. Fists of thunder, veins of ice, he would nonchalantly rattle through rounds with Haye, Mariusz Wach and Filip Hrgovic as if the only repercussion of a misstep would be a grazed knee. For as serious as those men took the sessions, Wilder would be getting buck wild, whooping and hollering during rounds, winding up punches, forever loose. He would take to goading his sparring partners, begging for more, and would even attempt to inspire and motivate them if he sensed they were flagging, almost affronted by their indolence. “Come on, Champ, let’s go!” he would spit through his gum shield. “This is The Champ’s camp!”

So impressive was Wilder second time around you would search hard for flaws and mistakes if only to readdress the balance. You would become heartened, for example, whenever Haye landed a stiff right hand, or whenever Wach got up in his grill, attached his chin to his chest and accosted Wilder against the ropes. Sensing trouble, your eyes would then stray from the American’s gloves, and what he did with them, to focus instead on his legs, those spindly stilts propping up a 225-pound body, and you would begin to wonder how many rounds Wilder would last in a kickboxing contest, when these legs would be treated like footballs, or even in a competitive boxing match, when opposing someone large enough and good enough to crack him clean on the jaw. You would interpret the image of two legs smaller than yours as a sign he was human.

“I always say, ‘Don’t judge a book by its cover,’” Wilder explained when this was later put to him. “My legs look skinny, I know, but it’s all muscle. I’m all muscle, bone and skin. Think of someone like Thomas Hearns. That dude never had the biggest legs in the world but, boy, could he bang.”

Unable to argue, you then find yourself going back to Wilder’s competition, or lack thereof, in order to make sense of his confidence and record. You tell yourself that once he shares the ring with someone decent he will surely come over all flustered and unsteady – perhaps even come unstuck.

“Styles make fights,” was Wilder’s answer to this concern. “But so far in my career I’ve cancelled out all the styles I’ve come up against by hitting too damn hard. Once you get hit by my shots, style goes out the window, man. Someone like (Sergey) Liakhovich might look effective and durable against other guys, but he hadn’t tasted power like mine. And you saw what happened to him.”

If in need of reminding, what happened to Liakhovich was this: he was gone in 104 seconds, curled into the fetal position upon sampling a right hand. A position hardly exclusive to him, we have also since seen what has happened to Bermane Stiverne, Artur Szpilka, Gerald Washington, Johann Duhaupas, Luis Ortiz (twice) and Dominic Breazeale when struck by the tip of Wilder’s whip.

As for Wilder, what has happened to Wilder, 42-0-1 (41), is this: he has become WBC world heavyweight champion and a man of whom highlight-reel knockouts are expected. He is the same size, but all grown up. He is better today than he has ever been. He shouts even louder. He is somehow hitting even harder.

Some, in fact, now go so far as to call Wilder the hardest punching heavyweight of all time. He, though, continues to call himself a natural, attributing otherworldly knockout finishes to little more than muscle, bone and skin.