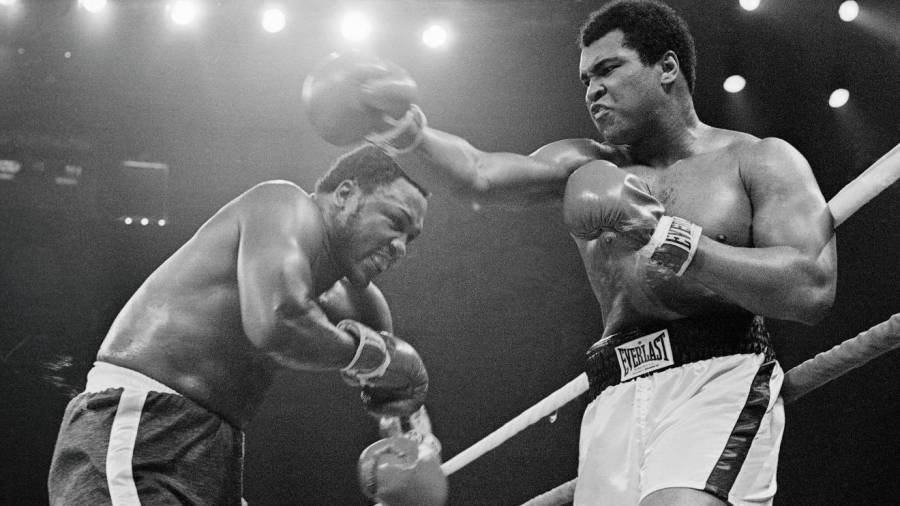 SURELY the greatest sporting rivalry of them all. Two great heavyweights, two very different characters. Ali was brash and quick-witted, Frazier quiet and proud. They were very different in the ring as well.

“The trouble with you, Joe, is that you can’t dance,” Ali told Frazier before their third fight, ‘The Thrilla In Manila,’ in 1975.

“But I can fight, though,” Frazier replied. And boy could he fight.

Their first meeting, at Madison Square Garden in March 1971, was the biggest event in boxing history, screened in 35 foreign countries, and had parallels with the first fight between Deontay Wilder and Tyson Fury in that it pitted the reigning champion (Frazier) against the lineal champion (Ali).

Both were unbeaten – Frazier had won all 26, Ali was 31-0 – and the rivalry became personal with Ali taunting Frazier by calling him “ugly” and “dumb”, and worse. Frazier answered with his fists, dropping Ali in the last to make sure of a unanimous points win.

The bad feeling between Ali and Frazier spilled over in the days before the rematch, both being fined $5,000 after they clashed when watching a repeat of the first fight together.

Ali ensured there was less drama in the ring, winning on points clearly. Next up was ‘The Thrilla In Manila.’

“It’s real hatred,” said Frazier in the build-up. “I want to hurt him.”

Ali appeared less motivated, distracted possibly by the company of his mistress in the Philippines.

“[Frazier] looked like he wanted to hit Ali during the instructions,” remembered Ferdie Pacheco, Ali’s physician. “Ali looked as if he were expecting a game of tennis.” As the fight went on, Jerry Izenberg, the renowned sports writer, sensed Ali and Frazier were “fighting for the championship of each other” and after 14 rounds of back-and-forth action in sweltering heat, neither could take anymore.

“Cut ‘em off” was Ali’s instruction to his corner, according to Wali Muhammad. “That’s how tired he was,” remembered Muhammad. “He wanted us to cut his gloves off. [Trainer] Angelo [Dundee] ignored him.”

Dundee was saved from making a decision because across the ring, Eddie Futch was calling over the referee. He had told Frazier: “It’s all over. The world will never forget what you did here today.”

Dundee said later: “Both guys ran out of gas, only my guy had an extra tank.”

THE only chance Swedish playboy Johansson had of defeating the 1/5 favourite appeared to be if he could land his right hand.

Johansson boasted: “No man can stand up to ‘Toonder’ (Thunder)”, and when he landed it on Patterson’s chin in the third round, he landed on his back. Patterson was still groggy and looking at his corner for advice when the fight restarted and Johansson showed him no mercy, smashing him to the floor for a second count.

There were seven knockdowns in total in the third round before the referee declared Johansson the new champion. History was in Johansson’s corner when they met in a rematch 12 months later. No heavyweight had previously reclaimed the title. Patterson was determined to become the first. He was quicker to the jab and his left hook kept Johansson’s right hand glued to his chin.

It couldn’t keep out Patterson’s left hook in the third round. Johansson went down and the force of a Patterson left hook later in the round left him unconscious. It was 10 minutes before Johansson could leave the ring.

Both were down in a dramatic opening round in the rubber match. First, Patterson went down from a right hand. The same punch had him over again and Johansson went looking for the finish. He ran onto a left hook and found himself on the floor.

Of the two, Patterson appeared the more shaken, but by the end of the third, he had Johansson cut around both eyes and had hurt him with body shots. Johansson responded to raise a swelling under Patterson’s left eye, but by the sixth, the Swede was fading and Patterson chopped him to the floor with rights for the full count.

OF the 32 rounds Bowe and Holyfield fought, one will always be remembered.

Bowe was the first to make a breakthrough in the 10th round of their first fight, in Las Vegas in November, 1992. Holyfield remembered: “Bowe hit me harder than I’d ever been hit in my life, an uppercut smack on the chin. I saw stars… they were dancing all around my head, like in one of those old cartoons.”

For around the next minute, Bowe threw everything at Holyfield, launching 40 full-blooded punches at him. Somehow, the champion stayed on his feet and Holyfield rallied, pushing back the heavier Bowe and slamming hard punches off his chin.

Bowe responded and they were hurling bombs at each other when the bell went. Bowe had more left in the tank for the final two rounds, dropping Holyfield in the 11th on the way to a unanimous points victory.

There was drama of a different kind in the seventh round of the rematch when Bowe, Holyfield and referee Mills Lane were almost joined in the ring by parachutist James Miller. In one of the most bizarre incidents in heavyweight history, he clattered into the ring lights at Caesars Palace, causing a delay of more than 20 minutes. On the resumption, Holyfield stuck to his game plan and boxed his way to a majority points win.

He then lost to Michael Moorer and Holyfield retired after a heart defect was diagnosed.

He returned to outpoint Ray Mercer and set up the rubber match with Bowe, who was coming off a satisfying knockout of former amateur conqueror Jorge Luis González.

Bowe looked close to victory against Holyfield after five rounds.

So concerned were the referee and doctor, they went to check on Holyfield in his corner. They decided he could continue and Holyfield met Bowe in the centre of the ring at the start of the sixth, made him exchange and dropped him with a left hook, hinting at an astonishing turnaround.

Every left hook Holyfield aimed at a shaky Bowe for the next few seconds missed and when they traded punches again in the eighth it was Holyfield who ended up on the canvas.

Up at ‘nine,’ he had nothing left and Bowe needed only two more clubbing shots to end a thrilling trilogy.

ONLY Frazier had previously beaten Ali and Norton shared a trainer with him, Eddie Futch. The old sage suspected Norton’s style was all wrong for Ali and so it proved. Ali’s jaw was left broken before a last round rally from Norton sealed the upset.

Ali would win the immediate return, just about edging ahead with a stirring effort in the closing session. The rubber match, the only one of the three for the world title, saw a back-and-forth fight that was again decided on the final round. Two judges had them level after 14 rounds, referee Arthur Mercante had Ali a round up.

Dundee told Ali: “Fight like hell, we need this round,” while across the ring the instruction to Norton was: “Don’t take chances. You have the fight won.”

Both boxed to orders and Ali, ever so contentiously, won unanimously on the scorecards.

SPROTT stepped in to challenge Williams for his British and Commonwealth belts at only five days’ notice in February, 2002, and was dropped and stopped in seven rounds.

The rematch went ahead in Reading, Sprott’s home town, 19 months later and ended in controversy. Sprott turned to the referee to complain about a low blow in the seventh and while he wasn’t looking, Williams flattened him with a left hook.

The Board ordered they should fight again and Sprott won by a single point, a decision that bemused many at ringside.
Williams complained to the Board, but they took no action.

SO gruelling was the first fight between these Midlands rivals in an eliminator for the British and British Empire (Commonwealth) belts, both ended up in hospital afterwards.

Gardner won that fight on points, Williams reversed the result in a rematch and the decider went the way of Gardner, a chicken farmer from Market Harborough, Leicestershire. Four times he dropped Williams in a five-round demolition.