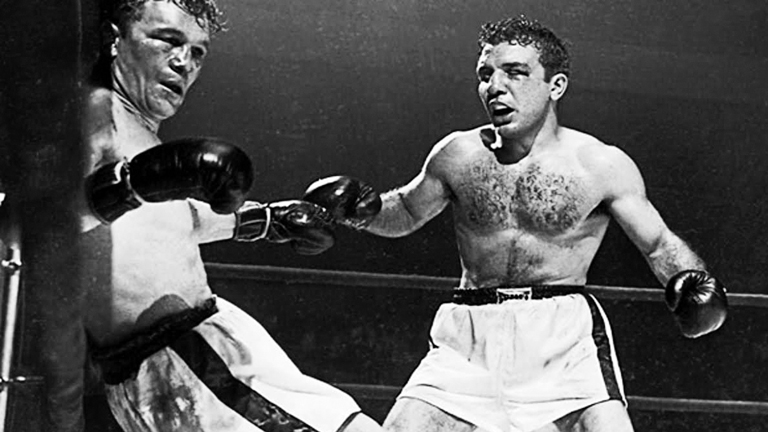 THERE’S a blurry video that had been popping up on the Internet for months, a bare-chested old man throwing slow-motion punches in a dimly lit room. It looks like he’s in a dream and perhaps he was, maybe dreaming of past glories, maybe trying to find out if he’s still got it. Jake LaMotta died on September 19 2017 at the age of 95 and shadow boxes no more. He was one of the last remaining links to another time, a time when Joe Louis was the heavyweight champ and every man wore a hat. The old scoundrel had outlived them all and now he’s gone.

In his fighting prime Jake LaMotta was an imposing presence. He had a chunky physique, accentuated by slabs of muscle plastered across his hairy chest and broad back. He wore a leopard-print robe into the ring and when the bell rang he went about his business with reckless belligerence. Nobody had an easy time with LaMotta, not even Sugar Ray Robinson. His life outside the ring was as turbulent as his fighting style. The son of an abusive father, Jake LaMotta grew up poor, street smart and wild. Trouble was inevitable. He spent time in a reformatory for youthful offenders but didn’t reform.

LaMotta abused women, including his wives, and beat a man so severely during a robbery that he thought he’d killed him, an event that haunted him for years. Guilt was the catalyst of his intractable fighting style. Jake felt he did not deserve to live.

That version of the “Bronx Bull” was just a memory when he strolled into The Ring magazine’s Manhattan editorial office one summer day in 1985. He was wearing a striped polo shirt and a wry smile. Except for a receding hairline and a few extra pounds around the middle, he looked pretty much the same as during his fighting days. A lived-in face like Jake’s is something you don’t forget and his low rumbling growl of a voice was instantly recognisable.

LaMotta, who would celebrate his 64th birthday the following month, was in a good mood. He had just learned that he had finally been voted into The Ring’s Boxing Hall of Fame, 44 years after his last fight. The former middleweight champion and the first man to beat Robinson had been denied the honour for so long because he’d thrown his 1947 fight with mob-managed “Blackjack” Billy Fox.

It was hypocritical to blackball Jake LaMotta when other fighters who had been involved in fixed fights were already enshrined, including George Dixon, Abe Attell and Kid McCoy. It seemed that LaMotta’s real sin was admitting his transgression. He did so in 1960 before a U.S. Senate sub-committee investigating organised crime’s influence on boxing. One gets the feeling that boxing’s establishment would have preferred he kept his mouth shut.

Despite all the punches he’d taken in 106 professional bouts, Jake LaMotta showed no ill effects of his former occupation. His answers during the wide-ranging interview that day were thoughtful, candid and at times humorous. He had been eking out a living as a stand-up comedian and couldn’t resist throwing in a little shtick when asked if he had any regrets.

“I would have never gotten married,” he said, laughing. “No. No. I got something out of each marriage. Teresa, my present wife, we’re very compatible. Every night when we go to bed, we both get headaches at the same time.”

Getting married was one habit LaMotta never kicked. When he died due to complications from pneumonia, he was married to his seventh wife, Denise Baker.

LaMotta’s rise from poverty began when he turned pro on March 3, 1941. By the time he fought Fox he’d already beaten Fritzie Zivic, Tony Janiro, Tommy Bell, Holman Williams, Lloyd Marshall, Bob Satterfield, Jose Besora and Robinson. Nevertheless, his refusal to cooperate with organised crime, which had a stranglehold on much of boxing at the time, was a problem he couldn’t solve with a punch in the mouth.

“I was the uncrowned champion for five years,” said LaMotta. “Nobody wanted to give me a shot … but time was running out. I was getting a little
too old. I wasn’t as good as I used to be. I had to make a decision. Either I lose the Fox fight or I don’t get a chance for the title. They offered me $100,000. I turned them down. I didn’t need the money. All I wanted was a chance to fight for the title.”

Even after LaMotta allowed Fox to stop him, it wasn’t until June 16, 1949 that he got the promised title fight against reigning champion Marcel Cerdan. The defining moment came in the first round when LaMotta, who was notorious for his uncompromising fighting style, threw Cerdan to the canvas with what historian Bert Sugar called “as pretty a hip roll as ever seen in a wrestling bout.”

Cerdan injured his left shoulder when he fell, making him virtually a one-handed fighter. The Frenchman struggled on until the end of the ninth round but didn’t answer the bell for the 10th. Jake LaMotta had finally fought his way to the top of the boxing world, but he’d had to give the Mafia $20,000 to cement the deal. The only money Jake made that night was what he won betting on himself.

There was supposed to be rematch, but Cerdan died in a plane crash on to way to New York from his home in France. LaMotta made two successful defences in 1950, winning a 15-round decision over Italian Tiberio Mitri and knocking out Laurent Dauthuille in the waning moments of the 15th round. Behind on all three scorecards, LaMotta staged a furious last-gasp rally, knocking out the French challenger at the 2-47 mark. It was quintessential LaMotta and the Fight of the Year. LaMotta’s joke about fighting Sugar Ray so many times he was surprised he wasn’t diabetic is a classic, but there was nothing funny about their six-bout series. Even though Jake only won the second fight, all six were hard fought and their fifth a split decision. A sixth with the title on the line was a box-office natural.

Robinson and LaMotta faced each other for the final time on February 14, 1951, in front of a packed house at Chicago Stadium. The champ went after Robinson in his usual swarming, roughhouse manner, while Sugar Ray backpedaled and countered. It was “guile versus guts, head versus heart and combinations versus courage,” wrote Sugar.

LaMotta was in the fight for the first eight rounds, but Robinson started to pull ahead in the ninth. From then until the bout was stopped in the 13th round, LaMotta took such a terrible beating that the fight became known as the St. Valentine’s Day Massacre, named after the gangland murder of seven men on the same date in 1929.

LaMotta never fought for the title again. His courageous stand in the final Robinson bout took everything out of him. He lost three of his next seven bouts and retired after Billy Kilgore outpointed him on April 14, 1954. As you might expect adjusting to life after boxing was even tougher than fighting Robinson.

“I was a little like Dr Jeckyll and Mr Hyde. When I was involved in the boxing business I was one character. When I went home to my kids I was a different character,” LaMotta said. “After my career was over, I still had two characters and I had to get rid of one of them. I was frustrated. Before, I used to take it out on my opponents. Then I started taking it out on my wives.”

It was the beginning of a downward spiral that resulted in LaMotta serving six months on a chain gang charge in 1958 after being convicted of introducing men to an underage girl in a Miami nightclub he owned.

There were many lean and unhappy years after he was released. The bit parts in movies and public appearances dried up. It got so bad that one Christmas Eve he wandered the streets of New York with just 35 cents in his pocket, ashamed to go home because he couldn’t afford gifts or a tree.

Things took a positive turn in 1970 when his autobiography, Raging Bull: My Story (ghosted by Joseph Carter and Peter Savage), was published by Prentice-Hall. The hard-hitting, tell-all book was well received, and in 1980 was turned into a movie directed by Martin Scorsese and starring Robert DeNiro as Jake. The juicy role earned DeNiro an Academy Award for Best Actor.

The movie portrayed LaMotta warts and all, emphasising his volcanic temper outside of the ring, including roughing up Vikkie LaMotta (portrayed by Cathy Moriarty) who was his wife at the time he won the title. “That was exaggerated,” said LaMotta. “I was a jealous guy and I belted my wives a couple of times, but if I really belted them, they wouldn’t have been alive.”

The movie put LaMotta back in the spotlight. Sentiments about him, at least among boxing fans, had clearly mellowed. When he was introduced at Madison Square Garden before Marvin Hagler-Mustafa Hamsho in October 1984, Jake received a tremendous ovation.

“It made me feel good,” said LaMotta. “The reason for that is that the American people, and maybe the whole world, are for the underdog. They figured I was the underdog.”

Shortly after the interview, The Ring held a luncheon in Manhattan where LaMotta was officially inducted. He wrote about it in the final chapter of his second book, Raging Bull II (ghosted by Chris Anderson and Sharon McGehee). “And now, 36 years after I won the title, I finally get inducted into The Ring magazine’s Boxing Hall of Fame… I guess it took a new, more forgiving generation to recognise my accomplishments in the ring in spite of what I had to do to get my rightful shot at the title.

“I stood outside a small midtown restaurant having a smoke before I went inside to accept my plaque. It wasn’t exactly the Hall of Fame room at Madison Square Garden, but it was good enough for me.”

The decision to give LaMotta his due wasn’t universally popular, but five years later he was among the inaugural class of the newly opened International Boxing Hall of Fame in Canastota.

For all the pain and misery it can cause, boxing is one place where even a man like Jake LaMotta can find a measure of redemption.