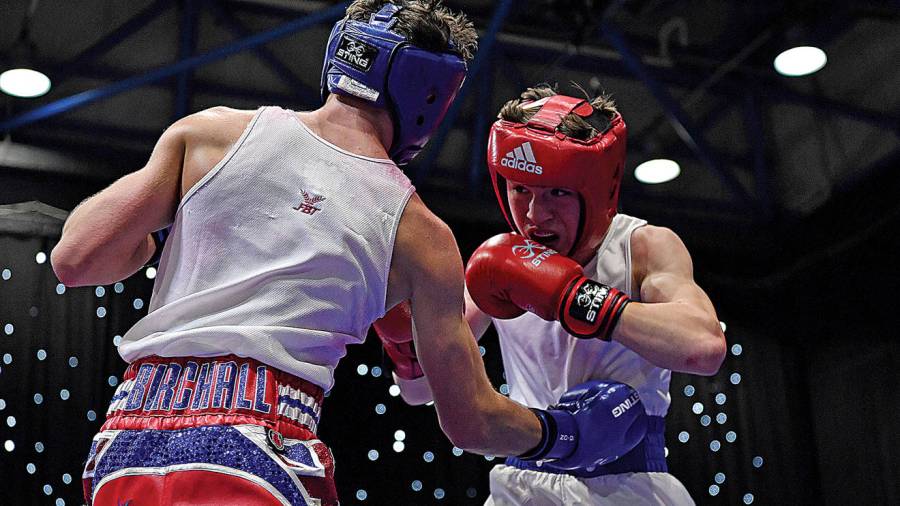 The England Boxing Youth championships concluded on February 13, with good showings for Sharpstyle and other clubs. Matt Bozeat was ringside in Barnsley

SHARPSTYLE southpaw Nelson Birchall starred when the England Boxing Youth Championship reached its conclusion over three days at the Metrodome. He won the Youth title at 60kgs with a unanimous points decision over Sherrington’s left hander Danny Lynch in one of the best of the finals. Though all five judges had Birchall ahead at the final bell, he had to work hard for victory. Lynch pinned him on the ropes for spells in both the second and third rounds, but Birchall landed clean punches under fire to get back to the centre of the ring. He stiffened Lynch’s legs in the third and followed up to hand him an ‘eight’ count. Birchall also took a count after being caught off-balance and proved he wasn’t dazed by getting on the front foot when the fight resumed, making sure of a third win in as many days and another national title.

Barnes and Osama Mohammed (Lions) had shared their previous four bouts and their 63.5kgs final was as tight as it promised to be.

Barnes switched stances and punched from his waist, while Mohammed was more orthodox, keeping his guard high and trying to land his jab.
Barnes was the quicker to find his range and finished better as well, landing several eye-catching uppercuts in the final minute to make sure of a 4-1 split verdict.

The 57kgs Cadet final between Varey, the 2019 European Schoolboy champion, and West Ham southpaw Connor Mitchell, the son of Kevin Mitchell, was desperately close. There could only have been a punch or two between them in each of the three rounds.

Three of the five judges had Varey landing enough clean rights to be ahead at the final bell.

Lawton, with father and former pro Scott in his corner, was a unanimous points winner over 2019 European Schoolboy champion Ellis Panter (Burton Park) in the semi-final.

Panter, who decided to bypass the Cadet class after winning the Junior title in Hereford last October, boxed well enough from the outside to leave the bout in the balance going into the last for me.

Lawton had more left in the tank for the final three minutes, closing the gap to land hard punches on the inside and leave Panter with his nose bloodied.

That set up a final against John Dugdale, who came through a ferocious final round against Andra Manning (Phil Thomas School of Boxing) in their semi-final to win unanimously.

Lawton kept Dugdale under pressure throughout, setting up everything with a long, thumping jab, and the 4-1 split verdict came as a surprise. Lawton looked to have clearly dominated the contest.

Clubmate Sophie Shore brought another title back to the Stoke-on-Trent gym, winning the 63kgs final against Abby Briggs (Hunslet) unanimously.

Briggs had won when they met in the semi-finals of the Junior championship at 70kgs last October, but at 63kgs, Shore came out on top, making sure with some thumping body shots in the last.

Tallon, possibly a shade fortunate to reach the final after Whitley southpaw Reuben Muston was ruled out in the dying seconds of their semi-final with a cut, unanimously outpointed Macauley Kelsall (Tom Hill).

Under pressure in the opening seconds, Tallon unloaded a blizzard of punches to body and head that left Kelsall with a bloodied nose by the bell to end the opening round.

Kelsall was back on the front foot in the second, while Tallon tried to find the openings for whipping hooks and uppercuts.

Tallon got his timing just right midway through the second round, finding Kelsall’s chin with a southpaw right hook to knock him off balance and force an ‘eight’ count.

On the resumption, Kelsall rallied and Tallon had to fight his way off the ropes before picking the cleaner punches off the back foot when the pace dropped in the last.

Luke Thomas (Phoenix Fire) outslicked Qasim Khan (One Nation) at 75kgs to win unanimously and up at 92kgs, Powerday Hooks southpaw Damar Thomas did a good job of keeping Zac Nearney (Cleethorpes Trinity) on the end of his long, straight punches to win unanimously.

In the last four, Whitworth boxed well on the outside and from the centre of the ring to outpoint Amy Nelson (Right Stuff), while Mackie jumped up a couple of gears after a close opening round against Libby Ellis (Rumbles) to dominate the last two and win unanimously.

Southpaw Aitchison was soon landing solidly with both hands and the referee gave McKay a couple of counts before waving the bout off.
In the Cadets, there was a split verdict at 63.5kgs where Dan Kerrigan (BoxSmart Elite) claimed the title with a decision over Yusuf Hussain (Burton Park).

The 4-1 vote went Kerrigan’s way after he finished strongly, but Hussain had his moments and never let Kerrigan find the rhythm he found in his semi-final win over Paddy Cash (Finchley).

Tall and slick, Kerrigan boxed his way home after listening to his corner’s instruction: “No more trading.”

Buttigieg had looked very stylish during his semi-final win over Sam Shillinglaw (Wolverhampton).

He walked Shillinglaw onto jabs, forced a count in the second and when they exchanged in the last, Buttigieg landed the harder shots to force another count.

He was never able to settle against Whittington, who got on the front foot at the opening bell and stayed there.

Whittington loaded up and Buttigieg couldn’t find an answer. Every time he tried to get his jab working, Whittington jumped all over him and when Buttigieg tried to punch with Whittington, he was forced to give ground.

John Mongans (Ardwick) had his supporters on their feet in the last minute of the 92kgs final as he threw everything he had at Dempsey McManus (Wodensborough).

McManus stayed on his feet and though Mongans looked disappointed after the 3-2 split decision went against him, McManus had put a lot more than him into the opening two rounds.

O’Donnell tried to control the bout from the centre of the ring, but Wood pushed him back into the corners and found his chin with enough clean shots to get the decision.

In the female final at 57kgs, Lia Crowe (Queensberry Police) stopped Anna-May Samuel (Maidstone) in the third round. The referee waved it after Samuel was left on rubbery legs by a pinpoint right to her chin.