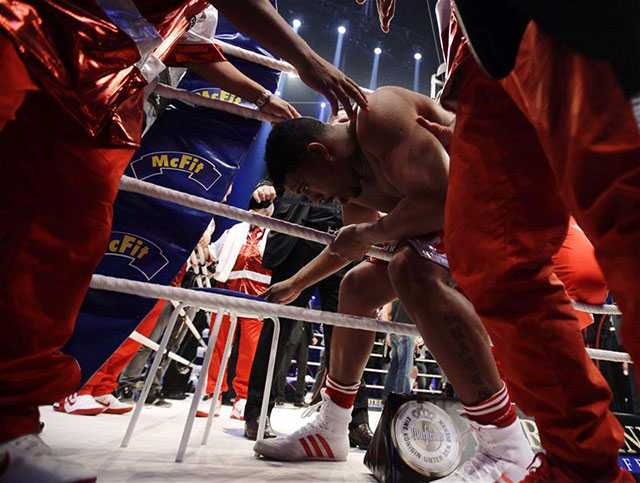 THOUGH the weekend’s euphoric setting in Belfast and the jubilant scenes in London marked a high point for some of Britain’s great boxing hopes, the sprawling Turkish metropolis of Antalya has likely ended the career aspirations of another.

Whilst Carl Frampton dazzled his legions of fans in the Northern Irish capital and Chris Eubank Jnr and Tyson Fury thrilled an increasingly entranced British public in the London Docklands, Odlanier Solis seemed intent on putting the sparse Turks in attendance to sleep at the Gloria Sports Arena. The smoldering ember of the Cuban’s once highly promising career finally looks to have extinguished.

The 34-year-old retired on his stall after eight depressing rounds in his latest feeble offering against 43-year-old American Tony Thompson for the dubious WBC Continental Americas heavyweight bauble. Having come unstuck against the same ageing foe 11 months ago, the 2004 Olympic champion had been granted an unlikely reprieve to right that wrong and prove he could still offer something within the recently revived heavyweight scene. Only he didn’t, and it increasingly looks like he cannot.

That his primary trainer in Miami, Jorge Rubio (who infamously presided over Amir Khan’s ill-fated 54-second calamity against Breidis Prescott) thought the Mediterranean sojourn not worthy of his travel expenses, depressingly shows how far ‘La Sombra’ had fallen.

The shameless neglect of a prodigious talent.

How can the man who mesmerized David Haye with his wondrous hand speed and footwork in the 2001 world amateur final, descend into such an inferior prototype as a professional, having sandwiched 2004 Olympic gold between three consecutive world amateur titles?

The former amateur starlet’s weight has long been a hot topic for debate amongst the boxing cognoscenti. Whilst the scales are rarely flattering to any soul, those used by Solis always seemed particularly vindictive, having regularly scaled in excess of 250lbs in the paid ranks. These numbers become even more baffling when considering he scaled under 200lbs when defeating Haye 31-17 in that aforementioned final. Whilst ‘the Hayemaker’ remained under the 200lb cruiserweight limit until his rapid destruction of Enzo Maccarinelli in 2008, Solis couldn’t and emphatically wouldn’t.

It’s never a particularly encouraging sign when a boxer weighs in at a career-high poundage for one of their most crucial bouts, just ask Dereck Chisora when he lost his ‘0‘ to Tyson Fury in July 2011, having tipped the scales at an eye-watering 18st 9lbs. (It’s arguable, that he’s never been the same since that Wembley reverse). Not to be outdone, Solis threatened to break them last weekend when scaling 19st 6lbs. For a man who stands a fraction under 6’ 2’’ tall, it’s about as far from peak physical condition as an apparently world-class athlete can be. If only his appetite for the gym matched his appetite at the buffet bar.

The majestic talent of Caribbean boxer Juan Guzman bares an unfortunate resemblance to that of Solis. Having ruled the world at super-bantamweight in 2005 and super-featherweight in 2007, the Dominican Republic native lost all discipline at the scales. The man nick-named ‘Little Tyson’ was last seen as a blown-up welterweight against 44-year-old American journeyman Kevin Carter last year, having received numerous fines from the sport’s governing bodies for failing to make weight in the ensuing years.

‘La Sombra’ started his pro career as he’d left the amateurs, cruising to 15-0 by wiping out former Haye victim Monte Barrett in two impressive rounds before labouring to a disqualification win over the woefully out of shape 40-year-old body of Ray Austin two fights later. Whilst not working at an energy-sapping pace or ploughing through the division like a teenage Mike Tyson had done in the mid-1980s, the Havana man had methodically manoeuvred himself into a mandatory challenger’s position for Vitali Klitschko’s WBC crown in March 2011.

In a bout many thought could signal a changing of the heavyweight guard, the fitness of Solis, or lack of, would once again rear its predictably ugly head. A bizarre first-round knee twist saw the bout halted in the opener’s dying seconds in front of 19,000 perplexed onlookers inside Cologne’s Lanxess-Arena. Whilst Solis denied his bulky frame had anything to do the incident, former amateur victim Haye was in no doubt that the incident was related to his dire conditioning, labelling it ‘embarrassing’ that someone could fight for a world title when so out of shape. Unfortunately he was 25lbs heavier still for his latest, and perhaps final bout on Saturday.

Whilst the first Thompson fight seemed like a generous olive branch from the WBC, a leg up when the Cuban had done little to deserve a fringe WBC title following three mediocre wins in as many years, the second represented a last chance in an increasingly crowded and raucous heavyweight saloon.

Saturday’s abject failure could and perhaps should represent the end of a pro career seemingly stuck in reverse gear. Even Mauricio Sulaiman’s extreme profligacy for sanctioning fees at the WBC would struggle to create another belt the Cuban to fight for now.

Whilst the picture looks increasingly luminous for messrs Frampton, Eubank and Fury, Solis’s outlook is shrouded in darkness; irrevocably heading into the sporting abyss rather than taking its place at boxing’s top table.

In the hardest game, nothing comes for free.