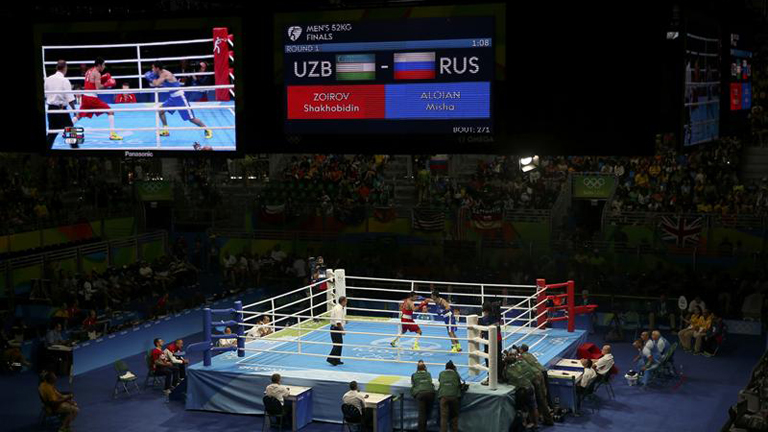 How technology might help address the issues with boxing scoring, writes John Dennen

THERE are always scoring controversies in boxing. The 2016 Olympic Games stirred up intense debate and of course professional boxing is hardly immune. But perhaps new technology could be the solution.

Boxing News spoke to Athletec’s Charles Burr, the creator of CORNER, a small device which folds into handwraps and is designed to measure the number punches thrown as well as their power and accuracy. CORNER has a function for sparring which calculates landed blows. Burr explained how that could be adapted into a new scoring system.

“It’s in development at the moment, it’s something that we’ve tested before. Essentially it’s just an extension of the system,” he said. “We’re able to detect different types of punches, we can dig deeper and actually look into how those punches are landing and start to see if it’s a clean hit, whether it’s a blocked hit or whether it’s a complete miss, all stuff that we can get out of the data, out of the signal. That’s something we have actually had developed but the main thing is putting time into testing and getting it reliable and 100% accurate.”

The main purpose of this function is to provide detailed, useful information on sparring. “The idea is that we see it being a huge benefit to sparring to have that more detailed insight, more detailed than what’s previously possible. At the moment a lot of top coaches will film sparring sessions. But with CORNER you’ll be able to give instant feedback and scoring as well so that you could make adjustments in that training session,” Burr continued. “The analytics will help coaches and fighters spot trends and habits in their practice. These may be certain combinations that they throw too much or when they typically begin to fatigue in a round or a session and then even what punches they tend to throw when they start getting tired. It’s definitely a lot more detailed than just filming sessions. It’s instant which I think is the big thing and accessible. I think being able to work out the accuracy of the shots that you’re throwing as well, how accurate are your hooks or your uppercuts and then also tying that to combinations and saying which combinations help me land those punches, which combinations do I have most success with. It’s all data that will be really useful for fighters who look into really understanding their own game.”

It works by drawing on the data of the devices in both pairs of gloves. “We can not only see what the signal looks like from the person throwing the punch but also the person who’s getting hit and how that data ties together. With all that data collected we can then draw a picture of what’s happened. If it’s a clean shot to the head or to the body, you wouldn’t expect to see much movement from the other person’s arms or you wouldn’t expect a big spike or a big impact on their arms, whereas if they’re getting hit in the shoulder or the glove or the forearm, it’s very clear that that’s a blocked punch,” Charles said. “This system could technically be readily applied to any scoring for competition.”

It could just be used to gather data on a contest. That for instance could be used by broadcasters to instantly gather accurate stats on the type and number of punches thrown and landed between and during rounds. Or could be used by boxing organisation to provide information to assess their judging or made available for their judges to use.”

“The technology will be there and it’s going to be readily available to fighters everywhere. So it’s almost going to be strange that you can’t see that data on TV,” Burr mused. “It could be a stepped process, it could be at first that data is fed to the judges to refer to, maybe they look at that and they can choose to use it in affecting what score they write down or they can completely ignore it but it’s there for their reference. Maybe it could even be a third judge or a fourth judge that contributes to that overall system.

“In some ways it might be a good starting point to benchmark the judging from what’s actually going on. There’s definitely quite a few ways about it. There’s no way that it’s suddenly going to be tomorrow there’s going to be no judges and it’s just going to be computers, it’s not going to happen, but there are still ways it can be involved in the officiating system. You see these technologies now in tennis and cricket and in other sports and the way they brought it in was saying you can challenge a call or you can use it to refer to but ultimately there’s still a human interpreting that data. I kind of see it in the same way as how this might start in boxing.”

The sport is notoriously subjective. But technology like this might be the way to bring it a step closer to objectivity.

The sparring function will be an additional feature but the CORNER device to measure individual training sessions will cost £49.99 and is available to pre-order on Tuesday 20th September from www.thecornerapp.com