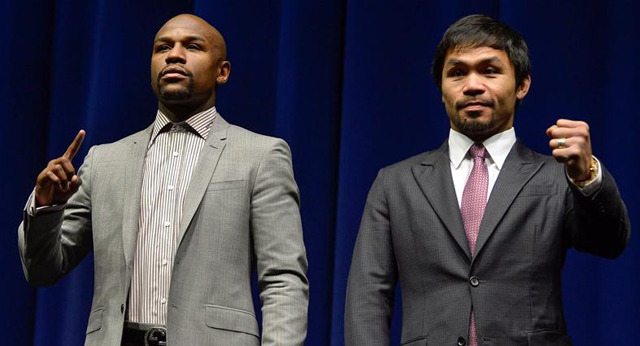 Alex Boyd examines the value in betting on Mayweather-Pacquiao

IT’S the final countdown. Europe frontman Joey Tempest’s most uttered lyrics now ring true to boxing’s ultimate fantasy fight night. With just six weeks remaining until the talking stops and the hands are meticulously wrapped, it seems an opportune moment to cast our eyes to the bookmaking landscape for the fight that will stop the world on May 2 in Las Vegas: Floyd Mayweather Jnr – Manny Pacquiao. (All prices quoted come courtesy of Betway)

Last week saw UK betting firms avoid the worst day in their history by the skin of their gnawing gnashers on Day 1 of the Cheltenham Festival, with Ruby Walsh’s last-ditch fall on Annie Power saving them a £50 million haemorrhage across the industry; it’s the turn of boxing punters to take dead aim at the lucky layers in a clash already being dubbed ‘The Fight of the Century’.

Whilst Mayweather-Pacquiao will do well to eclipse the original ‘Battle of the Century’ between Jack Dempsey and French war hero George Carpentier in 1921 and subsequent ‘Fight of the Century’ 50 years later at New York’s Madison Square Garden between Muhammad Ali and Joe Frazier, the May spectacular is as big as it gets in current boxing parlance. Whilst Ali and Frazier split a record-breaking $5 million down the middle in their first spine-tingling tussle 44 years ago, there’s rumoured to be an extra $245 million up for grabs in this latest Sin City extravaganza, and that’s a conservative estimate.

Since the fight was announced last month, it’s been one-way traffic at the bookmakers with the Filipino being backed off the boards into an industry top price 2/1 from sizeable odds of 3/1 a few short weeks ago.

Perhaps significantly, Manny has succeeded as a heavy underdog before, when terminating Oscar De La Hoya’s golden career as a 9/4 shot in 2008. In contrast, the underdog tag doesn’t sit well with Mayweather, so it’s just as well he’s never sat with it throughout his perfect 47-fight career.

Consequently, ‘Money’ is a skinny-looking 2-5 to go 48-0 (and move within one win of Rocky Marciano’s immortal ledger), incidentally the same price the self-proclaimed ‘TBE’ (The Best Ever) was to topple Ricky Hatton in 2007; we know how that one played out. Despite the prohibitive-looking odds, it looks sure to cajole the Vegas high-rollers, who will effectively view this as a 40 percent interest on their investment; a mite more alluring than the Federal Reserve’s near zero rate. Hardly a carrot-dangler for a fast buck.

Punters have clearly been unperturbed by the ‘Pac Man’s five reverses in a scintillating 64-fight 20-year career to date, which has seen him topple seven present or future Hall of Fame fighters across an eye-watering eight weight divisions, collecting world titles at every weight-gaining hop. No wonder the Filipino Congressman is so revered in his homeland.

Whilst Manny may have lost some of his primitive punching power that reduced both Hatton and Miguel Cotto to a bloody pulp in 2009 (the second-round knockout blow delivered by first class Filipino post against the Hitman was arguably one of the punches of the last decade) he was largely responsible for ending the career of controversial Mexican loose cannon Antonio Margarito in 2010 despite giving away nearly two stones in weight come fight night in his only foray into the light-middleweight kingdom. The eye injuries Margarito suffered that Dallas evening catalysed his retirement the following year after succumbing to Cotto in the Puerto Rican’s bitter revenge mission in the Big Apple.

Whilst displaying slightly greater caution in his advancing years, Pacquiao still floored Ruslan Provodnikov’s conqueror Chris Algieri half a dozen times in his most recent November outing, suggesting his padded mitts have not descended into the realms of powder-puff tickling just yet despite entering his 37th annum.

The Pac Man has the unusual distinction of inflicting one of the new millennium’s most savage knockouts and being vanquished by another. The former was the aforementioned Hatton finisher which sparked out the Mancunian for several scary minutes in 2009 whilst Juan Manuel Marquez returned the spiteful compliment in a 2012 Las Vegas epic. The stone-eyed Filipino idol’s shuddering face-plant in the dying embers of a thrilling sixth stanza emphatically ended their fourth encounter.

Given Pacquiao’s propensity to both deliver and receive seismic blows, the 9/4 on offer for an early bath for either future Hall of Famer could prove tempting whilst the firm quote 11/2 on Pacquiao to make history and halt Mayweather.

In contrast, Floyd’s infinitely more cautious nature has seen the man from Grand Rapids, Michigan be anything but speedy in vanquishing his recent foes. Since methodically breaking down and stopping Hatton in 2007, Money has mustered just one K.O in his last eight and that came in highly controversial circumstances against Victor Ortiz.

During that 2011 clash, the Queensbury Rules looked almost superfluous to proceedings as ‘Vicious Victor’ seemed intent on living up to his moniker when using his head more often than his hands. A clearly irritated Mayweather thought little of the token apology and delivered a right cross to close the show against a defenceless Ortiz, with referee Joe Cortez looking on in stunned disbelief at his naivety. If you fancy Floyd to conjure up a 27th stoppage of his unblemished career, snap up the 11/2 while it lasts.

However, given the pair’s advancing years and lack of recent fireworks, the judges’ scorecards could well get the full workout. This is reflected in the betting, with odds of 30/100 that the fight goes the distance.

Whilst Floyd appears to hold the aces in this seismic clash that has been five frustrating years in the making, he has shown areas of vulnerability in recent times. Cotto pushed him to a tight decision victory in May 2012 and induced claret to flow from Mayweather’s usually deadly eyes whilst Maidana’s rough-house tactics in their first clash clearly bothered the pound-for-pound king en route to a second successive majority decision triumph last year. The previous majority verdict against Saul Alvarez in September 2013 should be consigned to the dustbin of history as only the scandalous ringside scoring of a delusional CJ Ross prevented a landslide points win for the illusive Las Vegas resident.

With Mayweather generally happy to go risk-free in the twilight of a brilliantly-plotted career, it comes as no great shock that Floyd on points is no bigger than 4/7. However, given Pacquiao’s inherently more aggressive nature and inferior defence, the Filipino looks certain to take the fight to his illustrious but slightly gun-shy foe. Manny’s impressive shut-out of Brandon Rios and a fine revenge win over Tim Bradley prior to his 12-round beat down of Algieri, suggests there’s plenty left in the Pacman’s heavily-loaded tank.

With this in mind, the value bet in Vegas could well be Manny on points. You’d suspect a popular bet at a whopping 11/2, (almost trebling your odds compared to the outright win) although as one of gambling’s most infamous participants, it’s doubtful Money will be plundering his considerable fortune on that outcome.

SUBSCRIBE TO BOXING NEWS AND DON’T MISS A THING

LOTS MORE OPPORTUNITIES TO WIN BIG CAN BE FOUND HERE