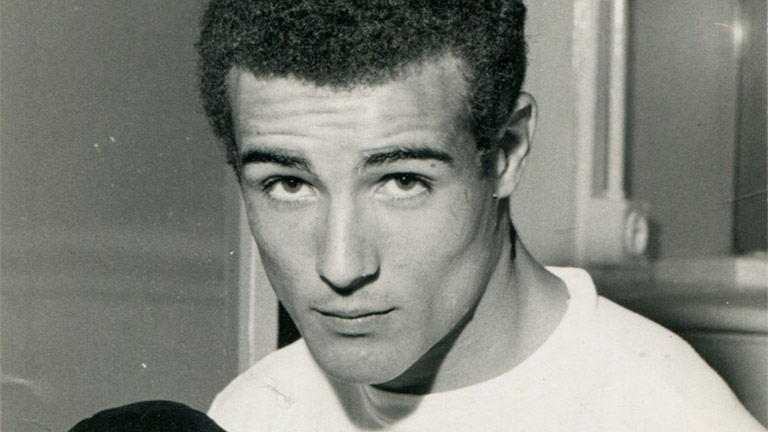 Despite his obvious talent, Jackie Turpin Jnr was hindered by a particular weakness, writes Miles Templeton

IN 1975 I remember walking across Newcastle Town Moor one afternoon right at the start of The Hoppings. At the time this was the biggest travelling fair in Europe and one of the attractions was the boxing booth. I watched as two men, one old and one young, were setting up the booth for the start of the week’s entertainment. The old man was Ron Taylor, originally from Merthyr and a professional during the 1930s, who was the proprietor of this, the last booth to operate within the UK. The younger man was Jackie Turpin Jnr, the nephew of the great Randolph and the son of Jackie Snr, who had well over 100 contests himself during the 1940s and 1950s.

At the time Turpin had had his licence pulled by the Board and he was working on the booths so that he could continue to use his fists to make a living. Jackie’s tragedy was that, although he could certainly dish it out, he had a lot of problems when under fire and his chin was very suspect. An early sign of this weakness came in the 1967 ABA final when he was dropped four times and stopped by Brian Hudspeth in a rip-roaring contest. He had displayed a dazzling style before he was tagged and looked like emulating his famous uncle in becoming an amateur champion at his first attempt.

He turned professional shortly thereafter, amidst much publicity, and during 1967 and 1968 he blazed a trail through Britain’s leading welterweights, winning nine on the trot and establishing himself as a huge favourite at the Civic Hall, Wolverhampton. In order to get these wins, however, Turpin had been flattened by Barry Coley, being hit after the bell, with Coley being disqualified, and he had been floored three times in the first round by Mickey Brooks before he came back to stop the Londoner in the second. He then lost four of his next six, with the last of them, in February 1970, being against the relatively light-punching Mickey Laud, who had Jackie down five times.

Advised to take a rest, Jackie was inactive for most of the year. He came back in November but struggled against Errol Francis before he then hammered Dave Moore in a round to see the year out. He looked to be back on track and his exploits in 1971 certainly proved this. He won all 11 bouts, 10 of them inside the distance, with five of those coming in the first round.

By the end of the year he was a top-ranked UK welterweight with an army of followers, a remarkably entertaining and exciting style and a high profile as a member of the Midlands’ most notable fighting family. He had also been voted the best young prospect by the Boxing Writers’ Club. He had the boxing world at his feet.

It all went wrong in his first contest of 1972. Matched against an American, Frankie Lewis, he took the bout despite recently recovering from influenza, and after winning the first round comfortably, things went suddenly wrong as the BN report highlights: “Disaster struck Turpin in the second. A left hook to the jaw shook him, and a right-hander that landed in the region of the left ear knocked him down. Turpin took a count of ‘nine’, but the punch seemed to chill his senses.” A second knockdown proved conclusive and Turpin was back to square one.

When I saw him helping Ron assemble his booth he was in the process of applying to be relicensed by the Board. They had a good, long look at him before allowing him to return. The result was predictable. He hammered Dennis Harbon in his first fight but was then floored three times and stopped by Bradford’s Jim Devanney. After that the licence was permanently revoked and Turpin, with his dreams unfulfilled, drifted into obscurity. For a short time he looked a million dollars.