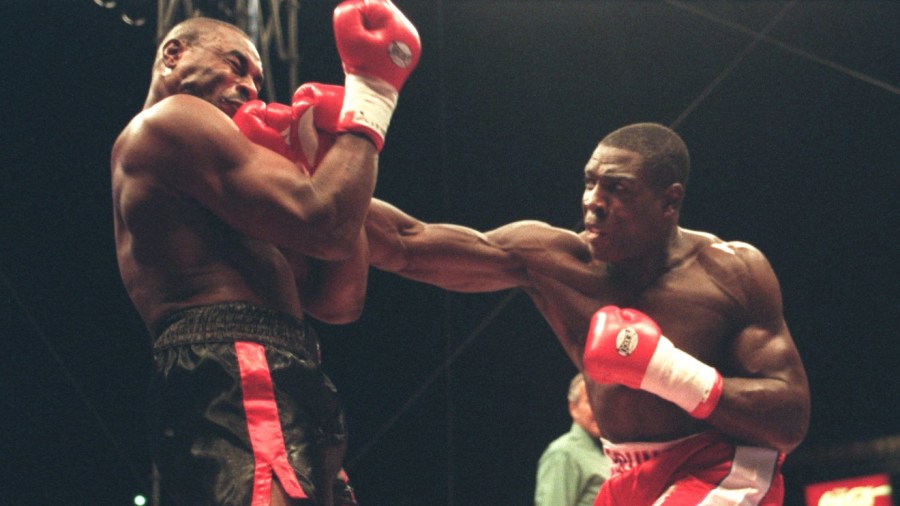 IN the land of hope and glory there are nights like Frank Bruno against Oliver McCall at Wembley Stadium. It was, as we all knew, the very last chance for Bruno that night. He had lost world title fights to Tim Witherspoon nine years earlier in the same ring, then Mike Tyson had ruined him and then Lennox Lewis hurt his pride. Bruno was 33, this was the end for Our Frank.

McCall had been a professional boxer for 10 years and an addict for longer. He had once been Bruno’s sparring partner; he had been a sparring too long, for too many fighters, we had thought and then a year earlier, just a few minutes down the road, he had knocked out Lewis to win the title. He was dismissed, remember, as a crack-fiend, rehab veteran and sparring partner before the Lewis fight. In the debris of that vicious night, McCall was upgraded to sparring partner who got lucky. Those are the facts, you know the facts. Here is the bad fairy tale part.

When McCall landed in London he opened up terrible, cruel and unnecessary wounds. Bruno was an “Uncle Tom”, he said and then he uttered the deathless: “I’ll take him out and try to do to him what he [Nigel Benn] did to my friend Gerald [McClellan]. This is not sport – it’s about vengeance and revenge.” It was a disgrace. Benn and McClellan had fought seven months earlier. You also know those facts.

Bruno was first in the ring, relaxed and I mean that. He was cool that night, his body loose as he kept moving, waiting for McCall. I was six-feet from the canvas, crowded in an old ringside press pit. We had landlines installed for ‘runners’ (filing copy during the fight). I was doing a 1,200 word runner that night for a Sunday paper.

McCall emerged, draped in towels and sheets and crying clear, heavy tears. He wiped and swiped at snot and tears as he took the long walk with most of his entourage of 27 at his side. Chief cheerleader on the night was Don King. We dreaded a Bruno collapse as his body froze after 10 rounds with another King fighter clubbing the national treasure to ugly, pitiful defeat. It would not be our first heartbreak.

‘I never said nothing about you. That was low’

Bruno was in front, boxing like a dream, blocking shots, dipping his knees and screwing up short rights. McCall’s face was cut, bruised, he looked sad and nobody in his corner had a single, solitary word to help their man. There was no comfort in that tiny caravan of confused souls that crowded round their troubled man, no solace and no genius to turn the lost cause in the breaks.

Somebody tapped me on the shoulder at the end of round eight: “It’s all over. Big Frank is gonna do it – he can survive this.” It was Frank Maloney, the manager of Lewis. He was genuinely pleased. But – there is always a ‘but’ in a serious Bruno fight – it was not over yet.

In the last minute of the 10th round the boxing demons started to seize Bruno’s body, to wrestle with his senses and the old, horrible highlights started to play in some of our heads: Bruno in front, slows down, American turns the fight over and Bruno is beaten. No, please, not again. In Bruno’s corner at the end of round 10 the men knew: Johnny Bloomfield knew, George Francis knew. They had six minutes of boxing and two minutes of rest to get their man through. The spoke, they grabbed his ears, they found his eyes, they pleaded.

In round 11 McCall cracked home a sickening left uppercut, Bruno’s swollen head came up, his body shook, a big crunching right then came in. Bruno held. At ringside Benn and Naseem Hamed were up, running the full length of their section, following the boxers, the crazy action. Frank Warren joined them with his own desperate pleas. King finally got up in the 11th and at the bell he went to McCall’s corner. Bruno was battered in that round – his mouth a bloody mess, his face disfigured. But, he was not broken. Bloomers and George had his attention in the corner.

“Three minutes, Frank.” And then 30,000 people roared the bell to start the last round. This was it.

The years of sacrifice, the years of derision, the insults, the failings, the fall-outs, the drama and the wins. Frank Bruno was fighting for far more than just McCall’s belt in that last round. He was fighting for redemption, for glory, for history – he was fighting for pride. Bruno survived the longest 180-seconds I can ever remember. I was standing at the end, phone trapped between shoulder and ear with a copy-taker hollering down my ear: “Has he done it, has he won?” The bell sounded, the phone fell as everybody screamed and threw their hands up. Forget press protocol, sorry. I picked the phone up: “Yes, he’s done it.”

There was a tearful, hugging, howling delay in the ring as Bruno tried to find his breath and McCall dropped his head and wiped at sweat. The ring was packed, but Bruno got to McCall and it was not pleasant. “I never said nothing about you,” Bruno shouted. McCall dropped his head even lower. Bruno had been hurt by McCall’s words – that was the real Frank Bruno. “That was low,” he added. McCall could not look him in the eye. I like that Frank. The judges settled it: All three and wide.

Our Frank was champion of the world in the land of hope and glory. And he did it with a large helping of sentimental magic.