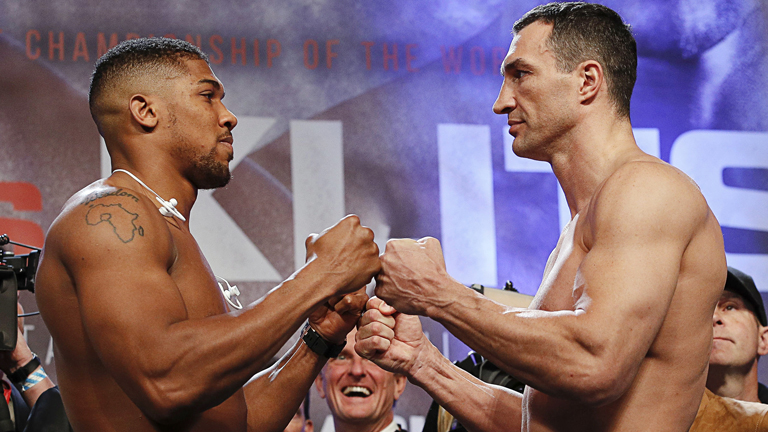 AT the Anthony Joshua weigh in today, “AJ” was the heaviest he’s ever been, while Wladimir Klitschko was his lightest since 2008! What can we take from the weigh-in?

Boxing Science strength and conditioning coach Danny Wilson explains more about what we can learn from the Anthony Joshua–Wladimir Klitschko weigh-in.

As predicted, Anthony Joshua tipped the scales at a career heaviest 250.1 lbs, 20 lbs heavier than his debut weigh-in at 230 lbs.

On the other hand, Klitschko has weighed in at a lean 240 lbs and looking in fantastic shape. The last time he weighed in lighter than this was against Sultan Ibragimov in 2008.

What can we assume from these weigh-ins?

Being the bigger man, and having blistering hand speed, Anthony Joshua may look to take out Klitschko early on.

We know that more weight creates more momentum into punches, therefore creating higher punch force. Obviously skill and speed need to be maintained, but from observing the media workouts AJ’s technique is looking crisp and punches look fast meaning AJ could be hitting EVEN HARDER.

HOWEVER… Taking on this higher body mass may become detrimental later on in the fight.

People raised question marks over AJ’s fitness during the Dillian Whyte fight that lasted seven rounds. AJ is weighing five pounds heavier this time around, so he could find it even harder going down the stretch.

OPPOSITE CORNER – OPPOSITE GAME PLAN

Weighing in at a lean 240 lbs makes me believe that Klitschko has been preparing for the distance, looking for a points win or late stoppage.

He is going to be light on his feet, use the ring well and the lighter body mass won’t be as demanding.

The last time he weighed in lighter than 240 lbs was against Sultan Ibragimov. A puncher stopping 17 out of 22, briefly looking at the footage Klitschko moves his feet well and needed his fitness to come away with a unanimous points decision.

WORKING TO OWN STRENGTHS – AND THEIR OPPONENTS

Both AJ and Klitschko have played risky games here to strengthen their game-plan – but potentially play into the hands of their opponent’s strategy.

AJ’s physical dominance over Klitschko could spell an early night for the heavyweight legend … however, past six rounds, the ball is in Wladimir’s court.