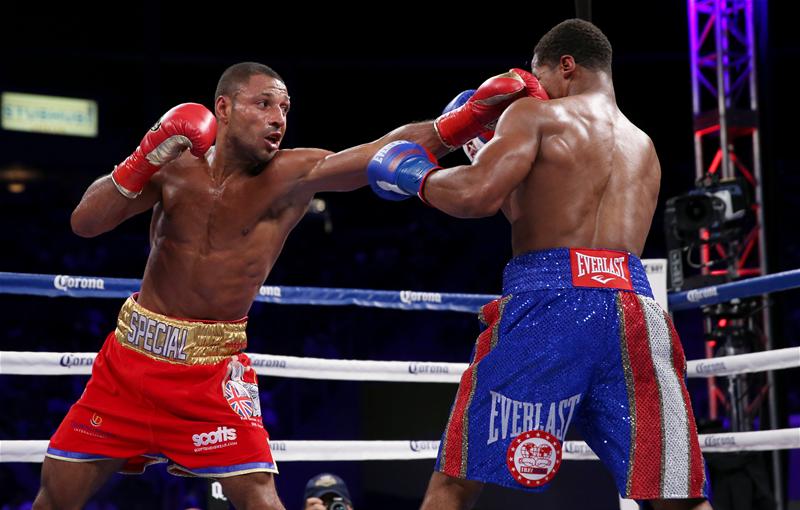 Boxing Science’s Alan Ruddock writes about how the team at Sheffield Hallam University supported Kell on his way to becoming IBF Welterweight world champion. The original article appeared in The Conversation:

Whether you watched on TV or were there in person you most likely saw the lights, the ring-walk, the fight and if you’re a Kell Brook or British boxing fan shared the shear exhilaration of the ringmasters final announcement, “…the winner by majority decision, and the NEW IBF WELTERWEIGHT CHAMPION OF THE WORLD…”. The first British boxer in 28 years to win a world-title in the USA from an unbeaten American fighter, Shawn “Showtime” Porter.

But for Kell Brook, his family and the Ingle gym, the lights that dazzled at 8 pm Saturday August 16 2014 have shone bright for the past 20 years in Kell Brook’s talent. His victory was the culmination of 20 years of hard work and support – and of course a sprinkling of science. Over the past two years I’ve had the pleasure of being Kell Brook’s and Team Ingle’s sport scientist. The path to world dominance is often portrayed as a series of successive linear steps, but it rarely occurs in a straight-line, and I’d be surprised if any athlete has had more up and downs and sideways steps as Kell Brook over the past 2 years. OnJuly 7 2012, Brook fought another American, Carson Jones in what was supposed to be a routine victory (if anything of the sort exists in sport), but Jones had other ideas and took Brook all 12 rounds in a brutal encounter that required both fighters to be hospitalised after the contest – Kell Brook the winner on points and subsequently a patient requiring medical treatment.

A few days after the fight Dave Hembrough strength and conditioning coach at the Centre for Sport and Exercise Science at Sheffield Hallam University received a call from Brook’s trainer, Dominic Ingle who asked if we could support Kell, for his next fight which was a final eliminator for a shot at the world-title and potentially for the world title-fight.

With the help of Ingle we put together a small team of experts in strength and conditioning, physiology, nutrition and psychology to help prepare Kell for his upcoming contest against tough Argentinian Hector Saldivia. One of the first steps in the scientific support process is to understand the demands of the sport, and for most sports a bank of evidence exists in peer-reviewed scientific journals that describe the demands of the particular sport– but not for professional boxing. Nevertheless, we synthesised the information relevant to professional boxing, observed sparring and collected heart-rate and lactate data and had extensive discussions with Ingle regarding the demands of the sport. We now had a model of the sport and so Kell visited our sport science laboratories so we could perform tests that would isolate specific components of our performance model to analyse and evaluate Kell’s strengths and weaknesses.

In strength and conditioning we focused on movement patterns and mobility before building strength endurance and later strength, in physiology we focused on developing Kell’s aerobic capacity utilising a range of high intensity interval training sessions and introduced heart-rate monitoring, Kell’s diet was adjusted to meet the demands of training and recovery and psychological skills training focused on relaxation, mental imagery and attentional focus during competition. These new elements in Kell’s preparation were slotted in-between his boxing specific training and other requirements and the whole process was tightly managed by his trainer Dominic Ingle.

Hector Saldivia was stopped in the 3rd round by a stiff left-handed jab. Our support continued with some adjustments, some practices fit and work well in elite sport, others don’t. We refined our training and testing process and proceeded with preparations for the upcoming world title shot against, the then holder of the title, Devon Alexander. However, that fight never happened despite being scheduled three times. Boxing is a tough sport and injuries are often unfortunate and unavoidable consequences of pushing the body hard almost every day. This period was a particularly low-time for Kell and his family, nevertheless he got back on track with impressive wins against Carson Jones (again), former world-champion Vyacheslav Senchenko and Alavro Robles before beginning a comprehensive 16 week training programme in preparation for the showdown with Porter.

In part two we’ll show you how Kell prepared for his world title fight against Shawn Porter.

Alan Ruddock is a sport physiologist at Sheffield Hallam University and writes for www.boxingscience.co.uk