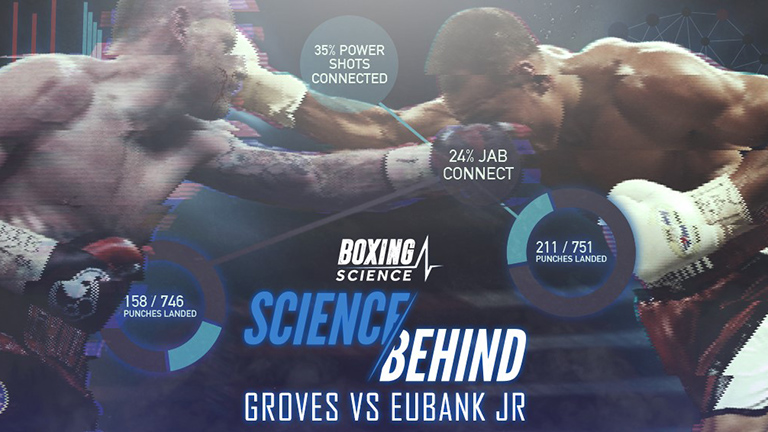 Forget what you think you know about George Groves vs Chris Eubank Jr. Danny Wilson and the Boxing Science team delve into the numbers and the reality behind the super-fight

But there’s one match-up that has the British boxing community’s mouth-watering – Chris Eubank Jr vs George Groves.

Eubank Jr and Groves dismantled Avni Yildirim and Jamie Cox respectively in their quarter-final contests and on Saturday February 17, the two will go toe-to-toe in Manchester with the winner a step closer to the Muhammad Ali Trophy.

We are currently within a ‘Golden Era’ of boxing, however many still favour the 90s where Eubank Jr’s father, Chris Eubank Sr was part of timeless all-British super-middleweight title fights. Now the ‘Next Generation’ aims to emulate his father’s epic encounters by stripping Groves of his WBA world title.

There’s nothing quite like big fights that divide a nation’s opinion.

Many favour the freshness and tenacity of Eubank Jr, whereas there are some that claim the size advantage, the power and experience of Groves will pull him through.

Whenever there’s a fight of this magnitude, and divided opinion, we always look deeper into the numbers, styles and training strategies of each fighter.

So, once again, let’s take a look at the science behind the fight, and make a prediction on the outcome.

A Fight Of Two Halves

Despite their rise to world championship boxing, both fighters have been criticised for their performance across the 12 rounds.

Groves, 29, is known for blistering starts (like in the first Froch fight) but fades and either loses rounds or gets stopped (only by Froch). The Hammersmith boxer, however, has endured the 12 round distance six times. The first in 2011 against long-time foe James DeGale, in which he won via split points decision.

His new rival, Eubank, has only gone the full distance on two occasions, against Billy Joe Saunders in 2014 and Arthur Abraham in 2017, the latter being a near-shutout on the scorecards.

Yet, it was his fight with Saunders that questioned the Brightonian’s durability over the distance. It was his first 12-round contest, and despite his publicly stated intentions to blast away BJS, Eubank Jr. was very cautious in his pacing strategy over the first half of the contest. Eubank Jr. only stepped on the gas when Saunders was pulling away with a huge lead, at that point it was too late.

Nearly three years passed before Eubank was in his next 12-round contest against Arthur Abraham. It was a reverse of the Saunders fight, where Eubank developed a commanding lead after six rounds and seemed to step off the gas in the latter stages of the contest.

That being said let’s delve into the numbers, provided by our performance analyst Chris Pitsikas.

Eubank Jr’s work-rate over the 12 rounds

According to his dad, boxing pundits and fans alike, Eubank Jr’s work-rate is one of his best attributes.

For someone that’s only boxed the 12 round distance twice, we’re curious about how he’d be able to maintain his work-rate over 36 minutes of combat.

Our first step in this analysis is to investigate his initial 12 round fight against BJS.

As mentioned previously, Eubank seemed to have a cautious start against Billy Joe Saunders, and the numbers confirm this.

This might be because it was back in 2014 when Eubank had just 18 fights. However, it’s a significant difference to the claims from Eubank’s team that his work-rate was easily “100 punches per round”.

This figure shows that Eubank threw just the super-middleweight average of 53 punches per round for only in round 11 and 12.

How does this compare with his recent fight with Abraham?

Eubank Jr. made massive improvements in his fight against Arthur Abraham, in both punches thrown and landed.

His work-rate improved by 35% overall, throwing 63 punches per round against Abraham. His percentage success improved as well, showing that he improved both quantity and accuracy of his punches.

The biggest improvement was with the jab, increasing jabs landed and thrown by 74% and 58%, respectively. This is something we’ll discuss later.

Compared to the average super-middleweight, Eubank Jr. now throws 16% more punches per round but Groves is no average opponent. Let’s see how his punches compare.

Does Groves gas towards the end of the 12 rounds?

We analysed Groves’ punch stats over his last three 12-round fights against Badou Jack (2015), Martin Murray and Eduard Gutknecht (both 2016).

Due to previous performances, many fans expect Groves to gas out towards the end of the fight against Eubank Jr.

As you can see in both the Murray and Gutknecht fights, Groves did have a lower work-rate later on. He dropped the average punch per rounds by 19 and 10 between rounds 10 and 12, respectively.

Interestingly Groves improved his percentage success of these punches landed during rounds 10-12 in both the contests. This could be a cause for concern against Eubank Jr, who showed in his last fight that he was able to maintain his pace a lot better.

However, it should be considered that Groves had already established large point leads in both the Murray and Gutknecht fights. Whereas in the Jack fight, Groves increased work-rate in a more competitive fight – in which he lost via a split decision.

When comparing the punch stats, there isn’t a massive difference in the total punches thrown on average per round – with Groves having a slender lead with 63 opposed to 62 for Eubank against Arthur Abraham.

The biggest difference is when Eubank stepped on the gas in rounds 4 to 6 landing 24% more punches than Groves’ average.

In terms of punches thrown, the biggest difference is in the last three rounds where Groves throws 7% more punches than Eubank per round.

This is an interesting figure, especially when people consider this as one of Eubank’s key advantages.

What does this mean for the fight?

Most people that are backing Eubank Jr. say that his work-rate and fitness would be too much for Groves.

However, the numbers suggest that their work-rates are similar, but Groves has the experience of maintaining this over 12 rounds – showing a much better pace in the last three rounds versus Gutknecht.

Click below for part 2 and the Boxing Science prediction.