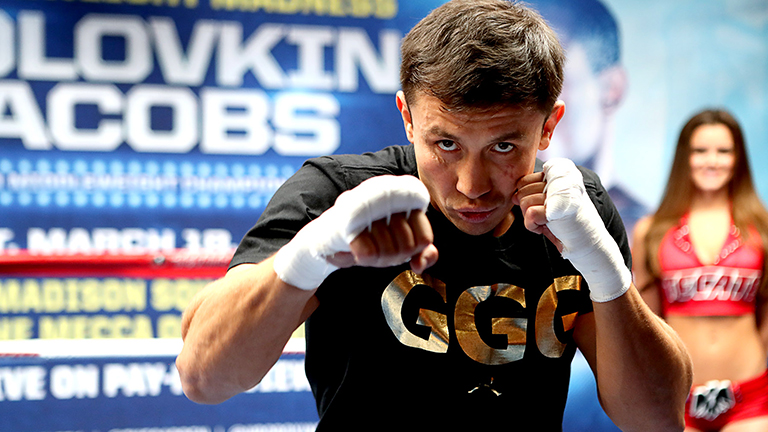 Boxing Science's Danny Wilson explains why Gennady Golovkin hits so hard, and how you can too

Catch up with part one here

THE undefeated, hard hitting  Gennady Golovkin looks set to become boxing’s next pay-per-view star. The unified middleweight world champion has risen from humble beginnings in his native Kazakhstan to world-wide fame thanks to becoming US giants HBO’s headline act.

GGG was always set for stardom following an outstanding amateur career, losing just 5 of his 345 competitive bouts. Golovkin has extended his strong reputation in the professional ranks by knocking out 91% of his opponents.

With one of the highest knockout percentages of the current boxing world champions, everyone is now wondering “how does Golovkin hit so hard?”

The second part of ‘Science behind Golovkin’, we explain the physical benefits of his amazing footwork, that help him move into range and let off those hammering blows.

A key contributor to Golovkin’s knockout success is his effective footwork. He moves effortlessly in and out of range, creating angles that his opponents can’t deal with.

GGG finds his range so easily and rarely throws a long shot. He often lets his shots go when he’s well within range of his opponent, meaning he’s able to maximise the force of each punch.

But why does this allow GGG to put so much force into his punches?

Science behind the mid-range punch

The mid-range punch is the most effective and can be explained by the physiology and mechanics of muscle action.

The length-force relationship describes how much force a muscle can produce at different lengths, and there’s an optimal length at which force is maximised. Muscle action can be limited if the the muscle is stretched or at a short length.

What does this mean for my punch?

If you connect with your opponent at the end range of a punch, you might still have hand speed. However, the muscle action may be limited when you stiffen up on impact (effective mass) due to the elbow locking out. Conversely, muscle activation is also reduced when you’re letting shots go at short range.

What does this mean? If you’e out of range or too close, your punch force will be compromised (see graphic above)

Due to Golovkin letting his shots go mainly in mid-range, this means the muscle action during a punch will be optimal upon impact – this occurs mainly in the upper-limbs and torso.

We understand that working predominantly within mid-range of your opponent is a difficult skill to master, that’s why Golovkin is at the top of his game. Therefore, our task from a strength and conditioning perspective is to help our boxers become more effective punchers over different ranges.

How can we improve this?

Lets say we want a harder punch at a longer range. One way we can do this is to increase the amount of force generating elements within a muscle-tendon unit but that has implications for making weight. So a great way to improve this is by using a technique called Accommodating Resistance Training.

See the video below where we have applied accommodating resistance methods on pressing exercises across the Force-Velocity curve: