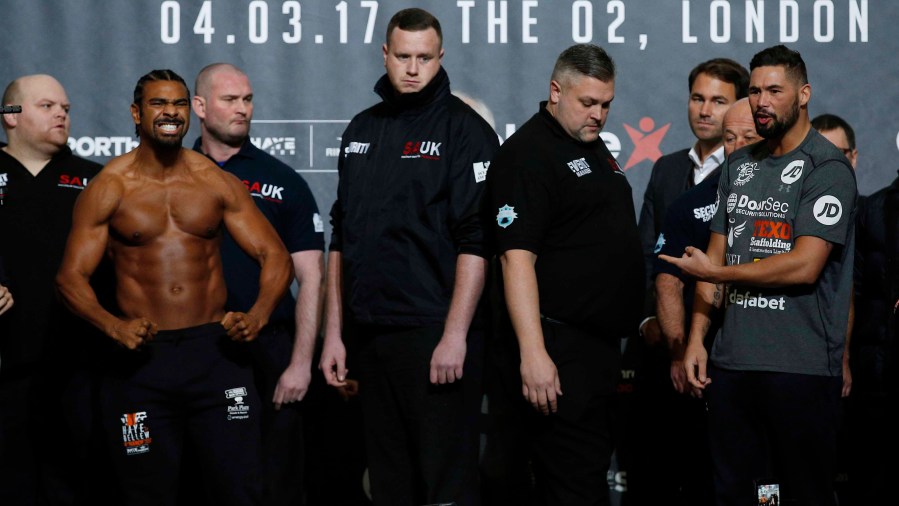 DAVID HAYE vs Tony Bellew takes place tonight (March 4) when they will be putting their words into action at the O2 arena in London.

There have been some big talking points in the build up to this heavyweight showdown, with Bellew stepping up a weight division and Haye’s inactivity making this an exciting match-up.

A lot is at stake for the two British boxers, however their preparation could not be more different. Haye has been sunning it up in Miami whilst Bellew has been grinding the sessions out in Rotherham and Liverpool.

Boxing Science take a look at the Science Behind this mouthwatering contest.

Haye has sent social media into meltdown with pictures and videos of his ‘Fun Camp’ in Miami. He has been preparing by doing pads on a multi-million pound yacht followed by a recovery jacuzzi with a cocktail.

This is not the most traditional way of training, however we can see the benefits.

Warm-weather training might be beneficial for competition under the blazingly hot ring lights and for heavyweights who’ll produce a lot of metabolic heat. The main early physiological advantage occurs because of an increase in blood volume that makes it easier for the heart to deliver oxygen to muscles and hot blood to the skin to remove heat, and this is helped by an improved sweat onset and rate over time.

It’s not easy to get these types of adaptation and Haye would have needed to be working hard to raise his body temperature. It’s likely that training in the heat just felt good to him, which of course would transfer across to all aspects of his training and psychological preparation.

In terms of Haye’s recovery methods; Yoga, walking on the beach and swimming in the ocean can help get the most out of training.

Bellew has mentioned Haye’s night club visits and partying with celebrities. We cannot make assumptions to how late and wild these parties are, and we don’t need to go into too much detail of the effects on late nights and alcohol.

Haye has been a great champion in the past so he will know how to and how not to prepare for a fight; a lot of these antics are in front of the cameras so could be mind games, we have no doubt that Haye will have been working hard behind the scenes.

Bellew is stepping up to heavyweight, which has made everyone think how much weight Bellew would need to put on.

His last four fights Bellew has tipped the scales at 199 lbs, whereas David Haye has recorded his heaviest fighting weights in 2016 coming in at 224 lbs.

Haye has said that he will look to come in lighter for the Bellew fight, which could see him return to a more familiar weight range between 210-215 lbs.

If that was the case, Bellew would only need to put on 3 kg of lean muscle mass to be at a similar weight if you take away his weight cutting techniques to make cruiserweight.

When stepping up weight categories, a boxer will have to make sure a well-structured and detailed plan is in place to increase functional muscle mass to be faster, stronger and fitter. This needs to be intelligently distributed to the desired body segments.

In previous articles, we’ve explained how boxers should aim to increase core and lower-body muscle mass through cluster, occlusion and speed training.

We explained how we targeted peripheral adaptations to help Kell Brook step up to middleweight.

Can Bellew’s Physique Be An Advantage?

A lot is said about Bellew’s appearance on the scales, and he admits himself he is not the best aesthetically. This makes a lot of boxing fans believe he will not be fit enough to deal with Haye.

It depends on the pace!

If the fight is set at a high pace, then this will be suited to David Haye as he has more muscle mass. Bellew can make his physique an advantage if he controls the pace of the fight, or soaks up Haye’s assault in the first half of the fight.

What do the stats say?

It has been hard to depict and analyse punch stats leading up to this contest, as Haye’s recent performances have been short-lived and little data is available on Bellew’s fights.

Bellew’s average punch thrown per round has dropped considerably from his last three light-heavyweight contests to his last fight vs BJ Flores. However, his punches landed / landed % has improved.

These changes will be down to different pacing strategies due to the likelihood of a stoppage win. Haye was more confident of stopping Chisora so he stepped up his work rate.

Summary of the Stats

The extra weight gain might further decrease Bellew’s work rate, whereas Haye could step it up as he seeks for an early stoppage. If Haye goes at full pelt and can’t get Bellew out of there then he might be in trouble.

If Haye sets a high pace in the opening rounds, and Bellew tries to match him punch for punch – Haye could get the KO win in the early-middle rounds.

If Haye sets a high pace but Bellew conserves his energy, this could make for an interesting second half to the fight.

Judging by the build up this fight will be a barnstormer, we can see these guys going toe to toe for a British classic.