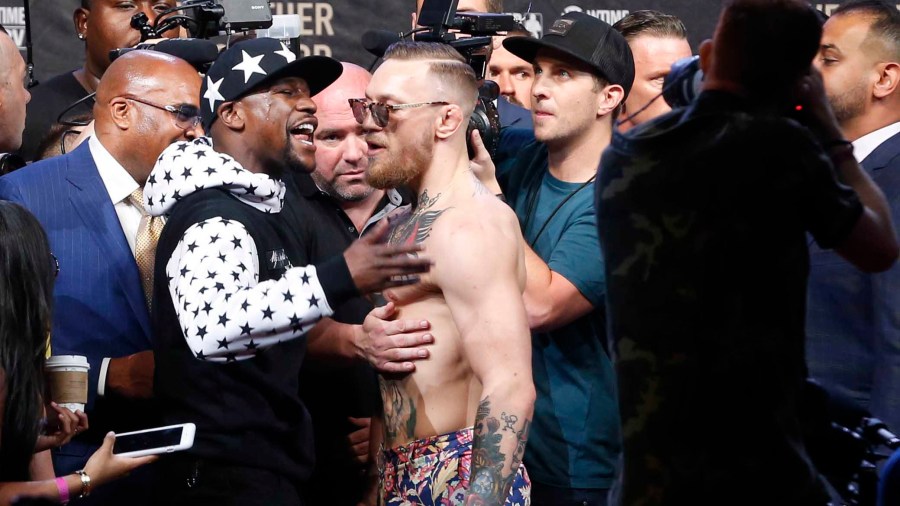 CONOR McGREGOR will have to adapt to a ring size 46% smaller and increase his strike rate by over 50% to beat Floyd Mayweather.

This will mean that McGregor will not only have to adapt to the rules of boxing, but also to the physical demands.

In order to win, ‘Notorious’ will have to undergo an intense conditioning plan, a specific strength program and many rounds of sparring to get into the shape of his life.

Boxing Science look at the science behind how McGregor will have to adapt his fighting style and share thoughts on what type of training he should be doing in his quest to shock the world.

Although disputed by many, the big money fight between Floyd Mayweather vs. Conor McGregor will be happening on Saturday August 26 at the MGM Grand in Las Vegas.

Boxing fans are sure this is a non-contest; however the two-weight UFC world champion is determined to etch the first loss of Mayweather’s perfect career.

McGregor, 28, needs to adapt his fighting style to the boxing format. This requires different skill, tactical and speed demands. What’s more, there’s a big change in physical demands due to intensity, contest duration, and ring size.

Danny Wilson and Alan Ruddock, accompanied by Danny Snow, take a look at the science behind how McGregor beats Mayweather.

What does this mean?

As the ring decreased in size, interactions between boxers increased, likely because of closer proximity. The increased contact probably resulted in greater physical requirements and the observed physiological responses.

What does this mean for Mayweather vs McGregor?

The difference in ring size can have a huge effect on physical demands. Without the right preparation, McGregor could fatigue earlier than Mayweather because of these unfamiliar competitive demands.

The ring size isn’t the only challenge either. Trying to stay on level terms with Mayweather will require extraordinary skill and fitness.

What do the punch/strike stats say?

Our analysis demonstrates that Mayweather throws (11.9) a similar amount of punches per minute than McGregor (12.0).

It’s likely that McGregors landing rate will reduce against Mayweather. So to have success in the fight, McGregor will have to increase his strike rate by at least 35% over a 12 round distance.

Research shows that McGregor throws (~13) and lands (~6) more per minute than Mayweather (~10 and ~5) in the first half of fights.

However, McGregor’s strike rate decreased in rounds 4 and 5 in his second encounter with Nate Diaz (Aug. 16) whereas Mayweather has more success in the second half than he does in the first.

In May 2014, Mayweather had his toughest test in recent years against Marcos Maidana, narrowly winning on a points decision. There was no unusual tactics or skill from Maidana, he simply to threw and landed as many shots as he could and put Mayweather under extreme pressure.

Compare this to McGregor’s average strike rate of 12 per minute. To have the success like Maidana, the Irishman will have to increase his strike rate by a massive 49.7%. McGregor will have to work on high-paced sparring and high-intensity conditioning to imitate the last man that had a lot of success against Mayweather.

The numbers suggest McGregor will need to adopt a different tactic to the one he’s used so far in UFC. He’ll need to throw more punches and engage in more high-intensity actions. This approach requires more energy and an overall greater standard of fitness.

The type of fitness he’ll have to work on will depend on how much time he will have had to prepare before the contract was signed because the time constraints will determine the most beneficial type of training. From the announcement on June 13th, there are just over 9 weeks until fight night.

For example, if McGregor had an 8-week camp; it would be suboptimal to induce sufficient cardiac adaptations (needed for aerobic capacity) because we know these adaptations typically start to plateau after 6 to 8 weeks.

Sure, he can train in a way that would elicit some of these adaptations but the magnitude of the benefits would likely be less than other types of training.

An ideal training camp length is one of continual improvement, systematically building the pieces that fit the performance puzzle. You can’t hit each physiological limiting factor of performance otherwise.

Let’s delve deeper to show you what we mean.

Here you can see the typical duration for diminishing returns.

The million dollar question is related to the magnitude of the training effect and its transfer to boxing, and that depends on the game plan.

If McGregor adopted a high-pressure approach like Maidana, this would require a large volume of high-intensity actions that demand a lot of mechanical force. Close combat requires more isometric and eccentric muscular activity in the punch as well as holding and pushing.

These actions are not confined to the upper-body either, to be dominant in these areas requires a whole body approach to strength and conditioning.

A high-pressure approach will tax the muscles energy, so a muscle that’s not well conditioned to execute this game plan will fatigue quickly and impair punch force and speed.

What does this mean for his program?

Many would opt for three min work to 1-min rest for McGregor to adapt to boxing, yet being so specific isn’t important when using an evidence-based approach to improving physiological mechanisms that underpin performance.

So we need an approach that helps us to get optimal adaptations within the time constraints of the training period.

These need to challenge the ability of the muscle cell to simultaneously:

This means that the muscles ability to use energy is improved!

Sprint interval training would be our favoured approach to condition McGregor. It has four main advantages because we can get rapid adaptations in:

2) mechanical properties of the musculoskeletal system

These qualities make it an ideal candidate to use as a training method if McGregor played a high-pressure game against Mayweather.

Want to train like we’d train McGregor? – Here is the full 8-week program

Here’s your chance to download the 8-week conditioning program we’d set McGregor if he was to train with Boxing Science (note: this is a simplified version of a complex programme; it’s designed for anyone to do).

We explain the benefits and how to perform each phase of the program. This is designed for you to challenge yourself like McGregor would have to if he was to shock the world and be the first man to beat Floyd Mayweather.

When developing a game plan, most fighters and coaches will look at ways to exploit the weaknesses of their opposition’. With a perfect record of 49-0 and an almost indestructible defence, it becomes quite difficult to pick out Floyd Mayweather’s weaknesses.

However, the rare occasions that Mayweather has been caught and hurt by opponents has been when working in range with bent-arm shots – the right hook/right hand over the top being the most effective whether from an orthodox or southpaw position.

This could be good for McGregor as a counter right hook would be a fast, devastating shot to land. However, McGregor is more effective when landing long, straight backhands – as seen in the video below.

What does this mean?

McGregor will have to throw more bent arm shots in range. This can be beneficial for punching force due to the length-tension relationship of muscle.

The mid-range punch is the most effective and can be explained by the physiology and mechanics of muscle action.

The length-force relationship describes how much force a muscle can produce at different lengths, and there’s an optimal length at which force is maximised. Muscle action can be limited if the muscle is stretched or at a short length.

In consideration of the tactics and physiology, the aim of McGregor’s S&C training would be to improve the strength of mid-range/bent-arm punches, being physically strong on the inside to put Mayweather under pressure and to improve hand speed.

One way we can do this is to increase the amount of force generating elements within a muscle-tendon unit but that has implications for making weight. So a great way to improve this is by using a technique called Accommodating Resistance Training.

This is where the resistance of an exercise increases with the range of motion, encouraging an athlete to apply more force at the top of the lift. It can be achieved with bands, chains or partial range lifts, mainly with squats, deadlifts and upper-body pressing exercises.

See the video below where we have applied accommodating resistance methods on pressing exercises across the Force-Velocity Curve.

Plenty of grappling and clinching experience will put McGregor in a good position to work on the inside.

McGregor should be loading up with heavy and isometric core exercises such as farmer holds, unilateral farmer walks and waiter carries.

We’ve done this before when up against stronger opposition – we put Kell Brook through a range of heavy and isometric core training drills in preparation for Gennady Golovkin.

Not only does McGregor have to increase his strike rate, but he will also have to punch more than he has ever done before.

Some might opt for upper-body conditioning or “power-endurance” (argh! nasty word), however, this can impair punch force and speed. McGregor will just have to get used to this by doing plenty of boxing training with a mix of glove size depending on tactical focus.

Punch specific exercises to develop strength and speed help boxers transfer force through punching action, however, this is important for McGregor as he’ll be punching more and be wearing bigger gloves than normal. A small change can have a significant impact on top level athletes.

4) Sparring with different size gloves will help to develop specific recruitment patterns and transfer adaptations from strength and conditioning training to the ring.