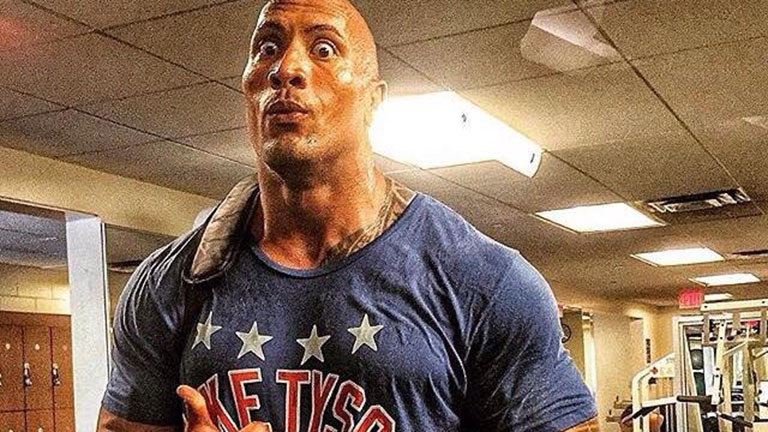 Roots of Fight boss Jesse Katz discusses his brand and why it’s taking the worlds of celebrity and sport by storm, writes Tris Dixon

FOR some, a dream might be the chance to meet their heroes. For others, the dream may be to create a business empire. There are not many who need an immediate fusion between the two – help from their heroes to enable the launch of a successful business kingdom.

But Jesse Katz had his dream, and it could only inch closer to reality if he could meet cultural icons and sporting legends who bought into it for no recompense, placing their utter faith – and their reputations – in his custodial hands.

He now owns a brand that partners with the families of Muhammad Ali and Bruce Lee, that works with the Gracies of MMA, as well as the Roberto Clementes and Dennis Rodmans of this world. Meanwhile, Dwayne Johnson, WWE superstars and a host of A-listers from the worlds of sports and entertainment wear his Roots of Fight clothing line.

It was his vision, but they have shared it. One by one they have joined his revered revolution and now around 60 legendary sports stars are assigned to ROF. It all started with Muhammad Ali and Bruce Lee’s family displaying “a huge show of faith”, as Katz calls it.

Why did they buy in to it?

“One, my business partner Richard [Lawley] is a creative genius and we had a really good body of work as a portfolio,” Katz explains of being able to show what his former consultancy agency had done with major sporting leagues and products.

“Richard had brought back and revived brands like Anheuser-Busch’s Budweiser, a low-brow, low-level beer, and we actually, through a licensing department, got it into major department stores and at high-level vintage fashion places. He basically recreated a brand strategy for them. And we had worked with The Rolling Stones, The Beatles, The Sex Pistols, all those bands, we had worked with the NHL, with the Olympic Committee, so we had a big body of good work that he had done and that made my job a lot easier; going out, showing them what we’ve done, how we do it and telling them that we’re going to do that for them. But instead of charging them six figures, we would do it for a trade-in in kind, for their licence.”

It worked, and it’s grown exponentially in less than five years since the initial Roots of Fight light bulb went off in Katz’s mind.

“We launched in January ‘12, so I’m going to say maybe halfway through 2010,” he says of when the idea first came to him. “We had met the Ali family, we had met the Bruce Lee family, his daughter Shannon Lee, and we were working with them in a consulting and licensing capacity. I saw a press conference with Floyd Mayweather and he stated that he was the best ever and somebody asked him, ‘What about Muhammad Ali?’

And he had an incredibly disrespectful response and that kind of clicked. I thought, ‘You know what? I’ve got to do something about this.’ We wanted to use the skills we had to create a passion project that paid respects to the people who’d paved the way for the athletes of today.”

Only a couple of significant names would be needed to get the show up and running. Katz started at the top – meeting Ali and his wife, Lonnie, and Shannon Lee, Bruce Lee’s daughter.

“They both took us under their wings,” he goes on. “They exchanged licence for value and time for us to do some brand work for them. It took us about, let’s say, a year to a year-and-a-half to launch from then.”

When he pulled the trigger on Roots of Fight, it coincided with Ali’s 70th birthday. Legend after legend – as they have in boxing and sports – would follow Ali’s lead.

The role call goes from boxing “Sugar” Rays Leonard and Robinson, to Jake LaMotta, to Arturo Gatti and Micky Ward, to Tommy Hearns, George Foreman, Joe Frazier and, the most recent addition, Roberto Duran, to MMA and the likes of Georges St-Pierre, Dan Henderson and Chuck Liddell. Now the company has expanded its range (“verticals”, as Katz refers to them) to Roots of Wrestling (Andre The Giant), Roots of Baseball (Roberto Clemente) and Roots of Basketball (Dennis Rodman). And more will follow.

Katz says the link to Bruce Lee has been invaluable for a positive working relationship with the UFC and its stars. Dana White, Joe Rogan and Brendan Schaub all wear Roots gear. But they aren’t alone in celebrity culture. One early fan was The Rock, Dwayne Johnson, the former WWE superstar and Hollywood magnate who would post pictures wearing his favourite ROF clobber either socially or in the gym.

“Yeah, I forgot about that little guy,” grins Katz, when reminded about one of his early backers that helped Roots go viral, from unknown pipe dream to mainstream respectability via a few well-placed social media posts.

“That was a great big help. And that started in a beautiful way,” Katz remembers. “My phone started blowing up because he wore one of our [Ray] ‘Boom Boom’ Mancini shirts. At the time we were only making like a 100 or 150 units. All of a sudden The Rock popped up on Twitter wearing it. I tweeted back to him, and then the next day his assistant called and said he wanted to talk. That was the start of getting to know Dwayne and him lending his celebrity and his influence to us. He loves the concept and he was just super excited and supportive.”
There was no way of knowing that the Roots label would tap into the niche it has so heartily filled, though Katz was always confident it would.

“Well, I’ve just turned 46, so I’m an older guy who grew up on boxing and martial arts,’ he acknowledges. “I was this huge fan of Bruce Lee, Muhammad Ali. I really didn’t see that there was anything else that was for me. I was a UFC fan, but I basically had to turn off the sound of the marketing for the UFC’s branding at that time, all Affliction and bedazzle and big bull stuff. It just wasn’t my style. I thought, ‘There’s got to be a lot of people out there that appreciate and love these icons and just don’t get a chance to show it because there’s nothing out there for us.’”

It has spread rapidly, but Katz is keen to focus on absolute quality, in the brand, the customer experience and the backstory of the product. “We still don’t talk to retailers,” he adds. “We have never paid to advertise or sponsor but we’re moving from a passion project into a business. It’s only been less than three years so we’re still at the infancy stage. I think we’ve passed over that natural brand recognition because of who wears our stuff; all the celebrities, and all the people with high profiles, but we’re still a small company so it feels like a niche. In the next two years is when we’ll really start revving our motor.”

It might have grown faster than he had anticipated, even though there were sceptics at the start. When he told his business advisor he was going to close the door on working in a successful agency, and was going to find fighting icons and create a commercial pantheon for them he did not get the ringing endorsement he might have hoped. “I mean, he didn’t laugh, he was incredulous,” Jesse recalls. “It was like, ‘How are you going to do this? You have no money. How are you going to sign them? Who’s going to build this?’”

Jesse felt he had to give it a shot and launched himself headlong into it.

A staff of seven people doing bits and bobs in their spare time soon grew to a team of 25 at their HQ in Vancouver, Canada.

Now, athletes approach him hoping Roots will produce a line for them, although he insists not just anyone can be a ROF icon. “You can’t just be the best in the world at something,” he assesses. “Now we need to make that criteria even smaller, so they have to have been the best in the world at something, transcended their sport and impacted popular culture. Otherwise we would be watered down and distracted really quickly.”

And with that, ROF would lose its unique selling position of being by the fans for the fans.

“I think that it’s got unlimited potential,” he goes on. “That’s why we guard it so tightly. We don’t need physical contact. I have had 1,100 retailers, wholesalers and distributors approach us to carry our products and we don’t sell to any of them. All we’ve done is brand building and really tried to get the concept nailed down, because we need to be able to scale it. We’re only three years old as a brand, and brands take five to 10 years to really kind of get a solid footing, and then they’ve got to be very smart about how they grow. So we’ve babied this and we’ve kept it back.

“We did a global deal with Under Armour. They pushed it out, they pre-sold astronomical amounts of our stock and we had to walk away from that deal because we felt like they were going to put us out of business before we got started; that they would flood the market. By keeping our stuff exclusive, by keeping control of the brand, we think we are setting ourselves up so that in two to three years we can start making a bigger play and start opening retail experiential stores, really hammering the digital and e-commerce thing. We really want to create a community that grows and unites this pantheon of greats, in all different fields. We still have to watch Roots of Soccer, Roots of Hockey. We see this going into Roots of Motor Sports, Roots of Music, Roots of Comedy – we want to get into all aspects over the next 10 years.”

One could see the future expansion into department stores and alike, but Katz has reservations.

“I don’t see that happening,” he concludes. “If I have my way, our model would be to have small footprint retail stores that can be brand experience stores, where we can send our icons and they can do appearances and they get to meet their fans, so we create an experiential store where you kind of have a retail store but you’re also introducing people’s brand and connecting the icons to their fans. And that’s where I think the kind of digital and physical worlds will eventually meet in retail. That’s what we’re betting on.”

Roots opened an online European store last year and recently had a pop-up shop in Manhattan. A permanent location is on the cards for New York or Los Angeles. They are equally protective of who they work for and with.

They want for themselves what they have created for the icons. They want the integrity that they have given to Ali and Lee, and they want to inspire fans with the help of their own supporters. That client list, by the way, includes Rihanna, Arnold Schwarzenegger, Jay-Z, Beyoncé, Ronda Rousey, wrestlers Steve Austin and The Undertaker, and so many more. The Roots Insta reach is now almost a quarter of a million. That alone would have been a dream for Katz at the start.

The whole thing was.