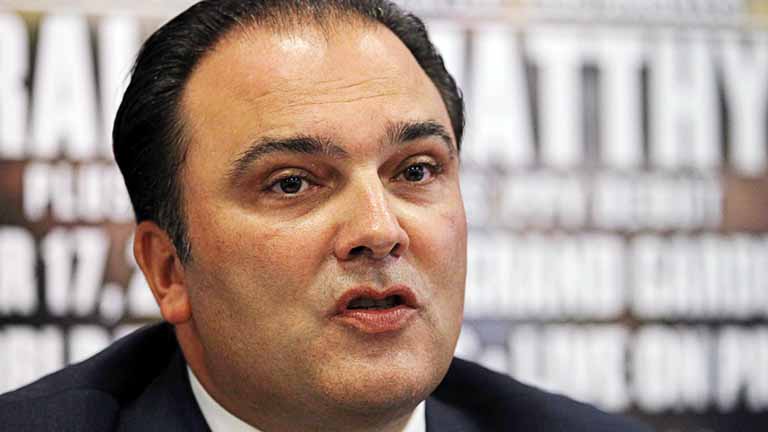 WHEN Richard Schaefer walked away from Golden Boy Promotions in 2014, it wasn’t exactly in a blaze of glory. The former Swiss banker found himself being sued by the promotional team he had guided to the top of world boxing, the consequences of which kept Schaefer – rightly proud of all that he achieved at GBP – out of boxing for two years.

In that time, Al Haymon surged to prominence – as much as an immensely private man can, at least – as he signed an array of talent, much of it once inked to GBP, and orchestrated the highly lucrative finale to Floyd Mayweather’s career. Amid it all, rumours began to build that Schaefer had long been plotting with Haymon to set up an all-conquering promotional brand.

But while Schaefer will work closely with Haymon, he insists his new Ringstar Sports promotional brand is his, and his only.

“He’s a friend and we have worked together on the Mayweather fights,” Schaefer told Boxing News about his relationship with Haymon. “He was Floyd’s advisor so we got to know each other and I respect him as a very smart, honest, straightforward businessman and it is a pleasure to work with him. What he does for the sport of boxing, and what he does particularly for his fighters is unheard of, and that’s why you have so many fighters who want to sign with Al Haymon because he takes care of his fighters.

“Truth be told, if I was to have a son who wanted to be a boxer, I wouldn’t have a second thought on recommending him to sign with Al Haymon. I don’t know how many fighters he has under contract, some say 200, some say 250, but whatever the number is, if you work with that many people in any business you know there are always going to be some who are unhappy. But with Al Haymon, with the exception of one who I heard complain which was Vanes Martirosyan, there is not one fighter who can say one negative word about the man. That tells everything you need to know about him. What better endorsement can you get?”

On December 10, Schaefer promotes the title double-header featuring Haymon-managed fighters;  Jermall Charlo defending his IBF super-welterweight title against Julian Williams, and the featherweight scrap between Jesus Andres Cuellar and Abner Mares. Then on January 28, in Las Vegas, Schaefer will co-promote the rematch between Carl Frampton and Leo Santa Cruz – two more fighters with ties to Haymon.

It’s easy, then, to see why cynics claim this was the plan all along, but Schaefer’s plans far exceed those of just being the promotional platform for Al Haymon’s managerial stable.

“The blueprint I had at Golden Boy was to sign my own fighters, and I recently signed the most sought after Olympian in the United States, Carlos Balderas. I will be signing my own fighters, established talent, emerging talent, talent that I feel will fit within the Ringstar philosophy that I believe I can help. I will sign my own TV deals and so on, but then if I have an opportunity to promote events for Mr Haymon just like I’ve done when I was at Golden Boy then of course, I would love to have the opportunity to work with him again.

“On December 10 I am promoting an event that features four Al Haymon fighters here in Los Angeles, and then on January 28 in Las Vegas is a rematch of Carl Frampton and Leo Santa Cruz, that I’ll be promoting together with Cyclone Promotions, with the McGuigans.

“Abner Mares, who is managed by Al Haymon, said recently he is glad to have me back and wants me to promote all of his fights in the future. That is a fighter endorsement. He knows what I can do, how I can make events and draw attention to those events, and basically promote. I think that has been missing a little bit and I think Al knows that.”

Schaefer has been impressed with what he’s seen in the sport since he’s been away, and he’s excited to be back. While some fans and media have seen a sport in decline, one struggling to find its way in the post Floyd Mayweather era, Schaefer sees the opposite.

“I am excited about the sport of boxing, more than I ever was,” he enthused. “You have boxing back on network television in the United States. You have the UK market showing a blueprint on how to bring boxing back and that can happen in the United States, in Mexico, Puerto Rico, and Asia as well. I only see a few other sports that have the global potential that boxing has, it’s a tier one sport, and we are only scratching its potential.

“You only have to look at the money broadcasters are paying to invest in live sport, like the Premiership, where you have different networks compete, some will get it [coverage rights] and some won’t. Those who won’t will have substantial amount of money to invest in other sports and I think that’s what you see here. The same is true in the United States, there is more delivery channels for live sports content than ever, where you see other platforms emerge. “To put it in terms of my old profession, as a banker, if boxing were a stock, it would be a screaming buy.”